This paper examines trends and developments in cross-border transactions, both from a Canadian and U.S. perspective.  It begins with a review of transaction statistics and commentary by the author, based on his experience as President of M&A International Inc., a leading mid-market investment bank with over 600 professionals in 42 countries.  The statistics (which are based on data from S&P Capital IQ) and commentary have been updated from what was presented at the ASA-CICBV Conference in October 2014 to incorporate year-end 2014 information.

This paper also examines the potential benefits, risks and challenges of cross-border transactions.  It concludes with a discussion of some of the key considerations for buyers contemplating a Canada-U.S. cross-border transaction.  The author would like to thank Stephanie Lau, Analyst at Veracap M&A International Inc. for her assistance with this paper.

As a starting point, it is helpful to take a global perspective on transactions.  As indicated in Exhibit 1, there were about 44,000 M&A transactions reported in 2014, which represents a slight decline from the previous year.  However, aggregate transaction value was close to U.S. $2.7 trillion, representing the highest level since 2007.  It is important to note that values are not disclosed for more than 50% of transactions.  This is particularly the case for smaller and mid-size deals involving privately-held companies. 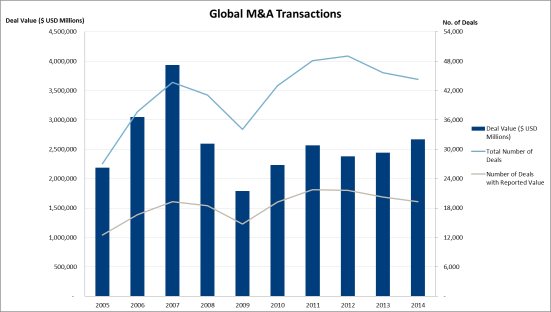 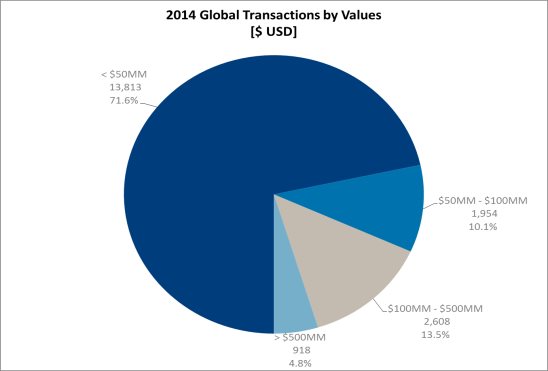 The financial services sector was once again the hottest sector, accounting for 28% of transactions in 2014.  Other popular sectors (each of which accounted for more than 10% of total transactions in 2014) included consumer discretionary, industrials and information technology (see Exhibit 3). 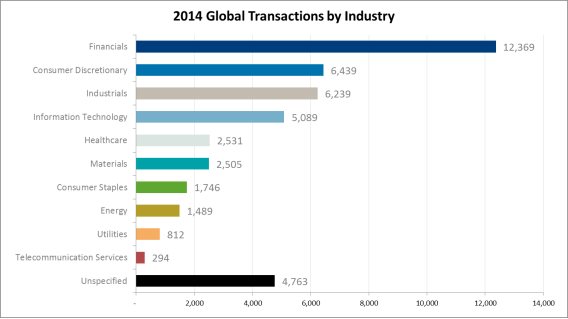 On a regional basis, North America accounted for the largest number of transactions, based on the location of the target company (Exhibit 4).  The number of transactions involving European targets continued to decline, likely due to THE suppressed economic environment in that region.  Asian companies were represented the fewest number of target companies.  This is partly explained by regional cultural differences, whereby many owners of Asian-based companies prefer to transition their business to family members, or they do not disclose that a sale has occurred.

2014 was a strong year for M&A activity in the U.S.  The value of transactions amounted to almost $1.2 trillion, representing the highest level since 2007 (see Exhibit 5).  The number of transactions was also near a record high, only being surpassed by 2012 (which was inflated as many sellers expedited the sale of their business to avoid tax changes that came into effect in 2013). 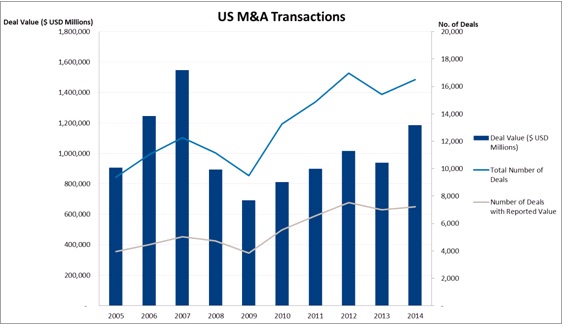 In terms of transaction size, over the past 10 years, approximately 71% of transactions with reported values in the U.S. have been for less than US$50 million, while about 6% are in excess of US$500 million (see Exhibit 6).  The median transaction value in 2014 was US$16.3 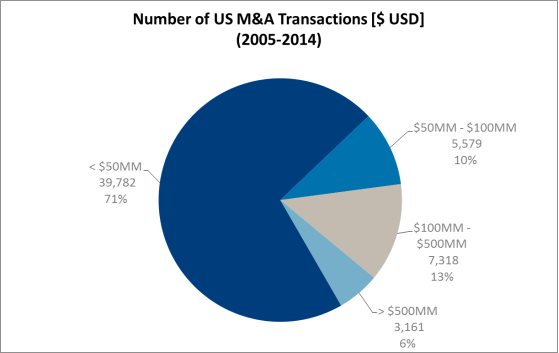 The large majority (approximately 95%) of U.S. companies sold in any given year are privately-held.  In fact, there were only 392 U.S.-based public companies sold in 2014, representing the second lowest level in the past 5 years (Exhibit 6).  The takeover premium (measured as the price paid for the acquired shares vs. the trading price of those shares one month prior to the announcement) declined to 28%.  The low number of transactions and takeover premiums are likely the result of buoyancy in the U.S. equity markets, which made public companies relatively expensive takeover targets in 2014. 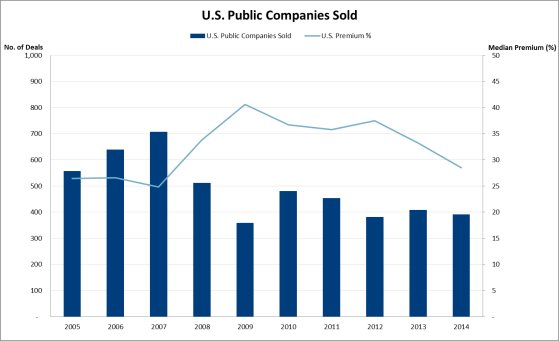 The vast majority of companies that are sold in the U.S. are acquired by another U.S. company.  Foreign buyers typically represent only about 96% of acquisitions (Exhibit 8). 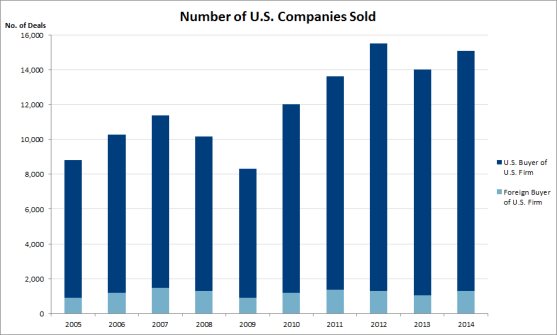 In each of the past 10 years, U.S. corporations have been more active in terms of the number of cross-border acquisitions than divestitures (Exhibit 9). 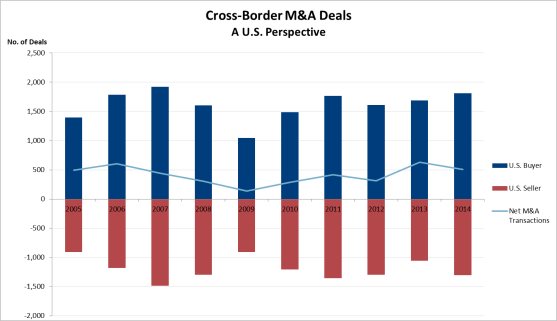 As indicated in Exhibit 10, over the past 10 years, European acquisition targets have been a favoured hunting ground for U.S.-based acquirers, far surpassing the number of European buyers of U.S. companies.  The U.S. is net sellers to Canadian companies.  U.S. buyers are also active in other regions, such as Latin America (Exhibit 10)

Over the past 10 years, U.S. companies are net buyers in virtually every industry segment, except for the energy sector (Exhibit 11).

The number of Canadian companies sold has been on the decline for the past several years.  While 2014 saw the largest deal value (among reported transactions), transaction value remained relatively flat in U.S.-dollar equivalent (Exhibit 12). 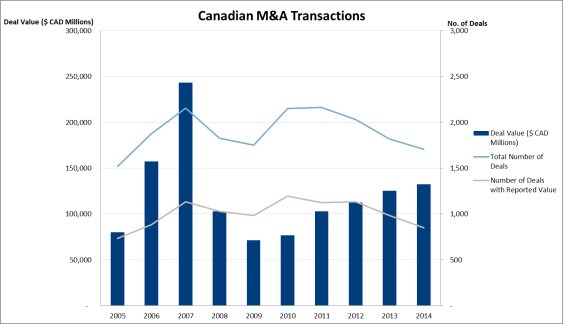 Compared to the U.S., Canada is much more a market of smaller companies.  The median transaction value in Canada is approximately CDN$9.5 million.  Furthermore, the transactions with a value of less than $50 million represented approximately 78% of all deals with reported values over the past 10 years, as contrasted with 71% in the U.S (Exhibit 13) 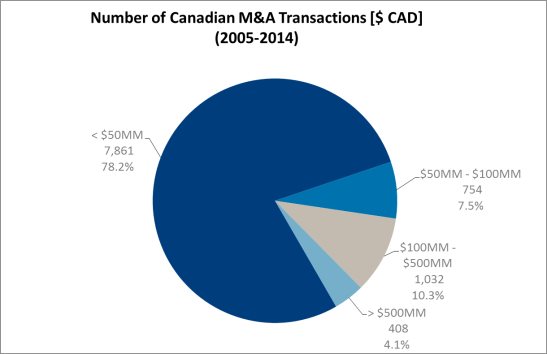 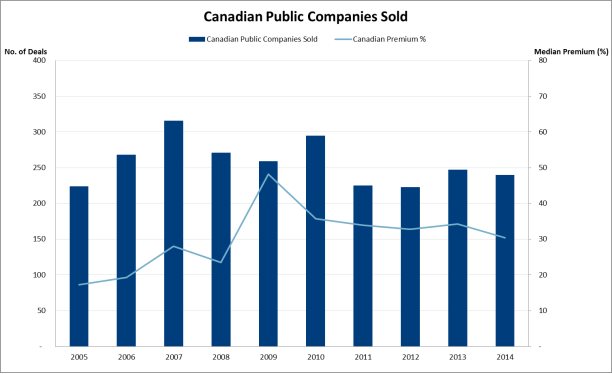 Over the past 10 years, approximately 75% of Canadian divestitures have involved a Canadian buyer (Exhibit 15).  Canadian companies are most often the buyers for smaller companies, where it is not cost-efficient for a foreign buyer to undertake the time, effort and cost associated with a cross-border transaction. 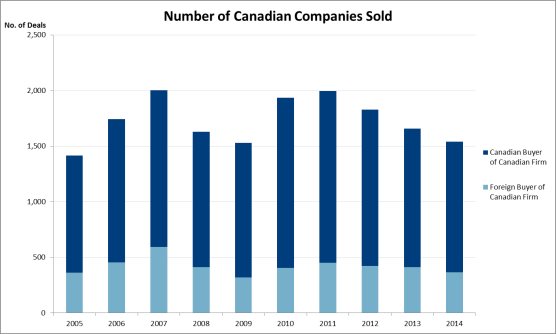 Despite much hype in the media about Canadian companies selling out to foreign buyers, the statistics reveal that Canadian companies have been more acquisitive abroad.  In fact, Canadian buyers have been net acquirers in cross-border transactions in virtually every year since 2005 (Exhibit 16).  This has been the case despite considerable fluctuation in the value of the Canadian Dollar against its US counterpart over that time period.  This indicates that corporate acquirers generally are not influenced by short-term fluctuations in exchange rates when making long-term investment decisions. 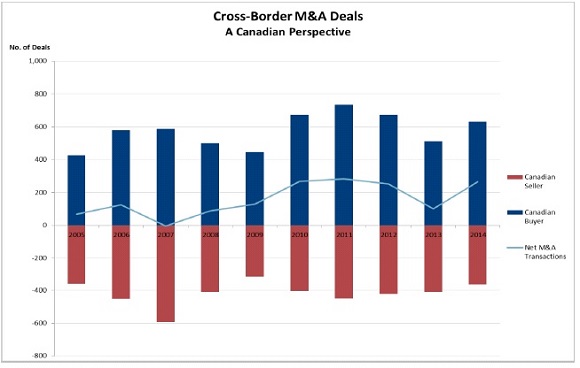 Canadian buyers have been particularly acquisitive in the U.S., where over the 10-year period ending in 2014, Canadian companies acquired 3,349 U.S. entities, as contrasted with 2,845 Canadian companies being sold to U.S. entities (Exhibit 17).  Relatively few transactions have been consummated between Canada, Europe and Asia.  However, Canadian buyers have been active in other regions, such as South America, particularly in the materials sector.

On a sector basis, Canadian companies are particularly acquisitive in the materials sector.  This is not surprising given the large resources companies located in Canada, whereas many of the resources are physically located throughout the world.  The financial sector has also been a popular area for Canadian companies, particularly since the economic crisis in 2008.  Canada’s large financial institutions have used their strong balance sheets to acquire significant assets abroad, particularly in the U.S.

Canadian companies are net sellers in the areas of information technology and industrials.

Cross-border transactions can offer buyers significant upside potential, assuming that things unfold as expected.  Among the key drivers for consummating cross-border deals are the following:

While cross-border transactions offer upside potential, there are also significant risks and challenges that must be carefully considered.  Some of the most notable are as follows:

As discussed above, numerous M&A transactions take place each year between the U.S. and Canada.  Despite having significant similarities, there are also important differences between the two countries in terms of market dynamics and regulations which must be considered prior to consummating a transaction. Witness the recent high-profile retreat of Target stores from Canada, which resulted in that company taking a loss in excess of $ 5 billion after just two years, when it failed to establish itself in the Canadian market.

M&A activity has been buoyant in recent years, particularly in the U.S.  Cross-border transactions are becoming increasingly prominent, as corporate buyers seek incremental growth opportunities and diversification.  However, the potential benefits of cross-border deals must be tempered with a critical assessment of the risks involved.

Take Note
This document is not intended to create an attorney-client relationship. You should not act or rely on any information in this document without first seeking legal advice. This material is intended for general information purposes only and does not constitute legal advice. If you have any specific questions on any legal matter, you should consult a professional legal services provider.
ADVICE CENTRE TAGS
Canada Mergers and Acquisitions
FREE News Alerts
Sign Up for our free News Alerts - All the latest articles on your chosen topics condensed into a free bi-weekly email.
Register For News Alerts
Practice Guide Tags
Canada Mergers and Acquisitions
Related Guides
Warning Bells – Time to Sell?
Up and Down Year for the TMT Sector
Terms of the Deal: Both Price and Terms are Important
Selling a Private Company: Part I – Common Mistakes
Selling a Private Company: Part II - Preparing for the Sale
Meet More Experts