So far, aross offices in many countries including Turkey, it was accepted that a trademark registered “as black and white” had covered the use of an identical trademark in all colour combinations.

In some countries, on the other hand, it was accepted that a trademark registered as black and white had covered only the use of black and white version. In this respect, the aim of the project, carried out by the working group of the European Trade Mark and Design Network which had been formed by the officials of OHIM and various national trademark offices, within the scope of “Harmonization Program” for the last three years, was to harmonize different practices of national offices. With the endorsement of the Common Communication (https://oami.europa.eu/ohimportal/en/news/-/action/view/1091009), which was adopted during the project and published by OHIM in April, the broad scope of protection of black and white trademarks is narrowing down.

In early May, the Turkish Patent Institute announced in its website (http://www.tpe.gov.tr/portal/default2.jsp?sayfa=703&haber=905) that changes would be implemented in the scope of protection of black and white trademarks. It is of prime importance that trademark owners are aware of this new practice which narrows down the scope of protection. In the face of the new common communication which will enter into force as of the 15th of July 2014, we recommend the trademark owners to review their trademark portfolio and actual uses of their marks and, if necessary, to file applications for the colour versions of the trademarks registered as black and white, the five year validity term of use of which has expired, (particularly, for trademark specimens in which colour is a distinctive element).

For the new applications, filing a trademark application for both black and white and colour versions will provide a broader protection.

The announcement made by OHIM has covered the following 3 main assessment centers to be adopted by OHIM and national trademark offices in common practice while assessing whether the colour version of a trademark registered as black and white and/or in greyscale will be considered identical to the mark:

1) In the assessment of a priority claim, trademarks registered as black and white or in greyscale will not be considered identical to the same trademark in colour as long as the differences in colour or contrast in the greyscale are significant. However, if the differences in colour are so insignificant that they will go unnoticed by an average consumer, the trademarks will then be considered identical.

3) In an assessment for the identity between an earlier sign registered as black and white or in greyscale and its colour version in terms of relative grounds of refusal, if the difference is insignificant these two signs will be considered identical. Having said that, the signs will only be considered identical if differences in colour of the signs must be negligible and hardly noticeable by an average consumer.

The following specimens are considered to have insignificant differences, the difference in colour is not perceived by the consumer.

The following specimens are considered to have significant differences; change in colour is noticeable by the consumer. 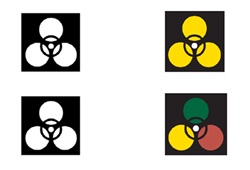 PS: The figures used in this article has been taken from the document at http://www.tpe.gov.tr/dosyalar/haber/cp4_common_communication_tr.pdf

Take Note
This document is not intended to create an attorney-client relationship. You should not act or rely on any information in this document without first seeking legal advice. This material is intended for general information purposes only and does not constitute legal advice. If you have any specific questions on any legal matter, you should consult a professional legal services provider.
ADVICE CENTRE TAGS
Turkey Trademark Fundamental Concepts Maintaining and Enforcing Rights
FREE News Alerts
Sign Up for our free News Alerts - All the latest articles on your chosen topics condensed into a free bi-weekly email.
Register For News Alerts
Practice Guide Tags
Turkey Trademark Fundamental Concepts Maintaining and Enforcing Rights
Supporting Documents
Template: Power of Attorney (Biligual English/Turkish)
Template: Deed of Assignment: Trademarks
Checklist: Criteria for Notorious Trademarks
Checklist: Trademark Filing Requirements
Checklist: Trademark Application Filing Process
Related Guides
Ten Benefits to Registering a Trademark
Quebec French Language Requirements
What is a Trademark?
Registering a Trademark
Deed of Assignment: Trademarks
Meet More Experts