The Board upheld a refusal to register the proposed mark TACO TUESDAY for beer, finding that the term fails to function as a source indicator under Sections 1, 2 and 45 of the Trademark Act. Applicant Monday Night Ventures unsuccessfully argued that the refusal was "illogical and incongruous" because TACO TUESDAY "is not informational at all as it relates to the goods in the application" and the use of the term by restaurants in connection with the sale of tacos on Tuesday is irrelevant. In re Monday Night Ventures LLC, Serial No. 88817107, [not precedential] (Opinion by Judge Cynthia C. Lynch). 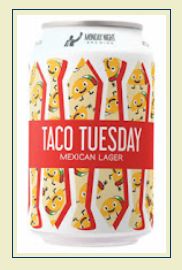 The evidence makes clear that "Taco Tuesday" is a very commonplace term that refers to having tacos and drinks on that particular day of the week. See Texas With Love, 2020 USPQ2d 11290, at *3 ("It is clear from how the term is used by multiple third parties that [the term] merely conveys a well-recognized concept or sentiment."). The record also shows that "Taco Tuesdays" commonly involve beer consumed along with tacos, and "Taco Tuesday" events often feature beer specials. "[T]he marketplace is awash" in use of the term for events and specials including beer. See D.C. One Wholesaler, Inc. v. Chien, 120 USPQ2d at 1716.

Noting that applicant's own website promotes its beer as "the ultimate pairing for tacos," the Board found that consumers would perceive TACO TUESDAY "as an informational indication that the beer is suitable or intended for drinking at such 'Taco Tuesday' events."

Although Applicant provided a menu specimen and evidence of TACO TUESDAY on its cans of beer, showing use in a non-informational manner, we remain unconvinced that the term actually functions as a mark because of the environment in which it is perceived by consumers.

And so, the Board affirmed the refusal.