The USPTO refused to register the proposed mark SMART TECH for "downloadable software for controlling RFID enabled electronic toy and model trains, toy and model train sets, and components therefor" and for "RFID enabled toy and model electronic trains and train sets, and accessories and components therefor, namely, train tracks, buildings, figures, signs, vehicles and trees" [TECH disclaimed], deeming the mark to be merely descriptive of the goods under Section 2(e)(1). Applicant Brio argued that SMART refers to the impact of the toys on children because "playing with them develops fine motor skills, promotes problem solving skills, and encourages creativity." How do you think this came out? In re Brio AB, Serial No. 90091387 (November 4, 2022) [not precedential] (Opinion by Judge Michael B. Adlin). 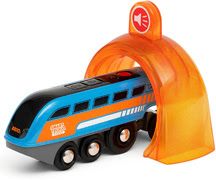 Examining Attorney James Earl Sensor relied on dictionary definitions of SMART, TECH, TECHNOLOGY, and RFID, as well as on third-party registrations on the Supplemental Register and registrations on the Principal Register under Section 2(f) or with disclaimers. He also pointed to Brio's website, referring to statements like "Based on smart interactive technology with action chips. BRIO Smart toys are preferably used with BRIO Smart Tech Engine to make sounds and actions possible."

In addition to its argument about making children smarter, Brio also introduced evidence that "SMART is widely used in connection with children's toys," but, according to Brio, "most often does not indicate the toys are enabled with any kind of technology." It also argued that the proposed mark is suggestive rather than merely descriptive because the mark "has several different suggestive connotations rather than a single descriptive meaning." Furthermore, even if consumers perceived SMART TECH as a reference to RFID technology, "nothing about RFID technology immediately brings to mind toys or toy train sets."

The Board, however, had no doubt that SMART TECH "is merely descriptive because it immediately conveys knowledge of a quality, feature, function, or characteristic" of Applicant's "RFID enabled" toy trains and toy train software. *** Applicant's identification of goods and website make this clear." It pointed out that Brio's arguments suffer from the same flaw: "Applicant misapprehends the applicable standard. 'The question is not whether someone presented with only the mark could guess what the goods or services are. Rather, the question is whether someone who knows what the goods or services are will understand the mark to convey information about them.'"

Here, consumers who know that Applicant offers “RFID enabled” toy trains and software to control the trains will immediately understand SMART TECH to convey information about both the toy trains and the software. Specifically, they will understand that the trains will be “smart” in that they will take action (such as moving, making sounds or turning on lights) when commanded to do so through Applicant's RFID enabled “tech."

That SMART TECH may have other meanings in other contexts is irrelevant. Likewise, "it does not matter that the proposed mark is 'vague' or broad in the abstract. What matters is how it will be perceived by consumers who know that Applicant offers RFID enabled toy trains and software to control them."