by Courtenay C. Brinckerhoff
Foley & Lardner
Your LinkedIn Connections
with the authors

In a Director's Forum blog on the importance of interview practice to the patent examination process, the USPTO announced that the First Action Interview Pilot Program is going to end on January 15, 2021, largely due to underuse.

The First Action Interview Pilot Program has been running for 12 years, but its popularity never took off. The basic premise of the program is explained on its USPTO webpage:

Under the Full First Action Interview Pilot Program, an applicant is entitled to a first action interview, upon request, prior to the first Office action on the merits. The examiner will conduct a prior art search and provide applicant with a condensed pre-interview communication citing relevant prior art and identifying proposed rejections or objections. Within 30 days of receipt, applicant schedules an interview and submits proposed amendments and/or arguments. At the interview, the relevant prior art, proposed rejections, amendments and arguments will be discussed. If agreement is not reached, the applicant will receive a first action interview Office action that includes an interview summary that constitutes a first Office action on the merits under 35 USC 132.

I have participated in the program several times, but perhaps not much more frequently than the 0.2% participation rate cited in the Director's Forum blog as the reason for discontinuation. I found it could be helpful to have an opportunity to discuss the invention and any cited art with the examiner early on, but some viewed it as an aggressive approach that rarely was warranted.

One issue with the program that isn't mentioned in the blog article is the complexity of the next step(s) after the interview. This slide from the USPTO's presentation on the program says it all: 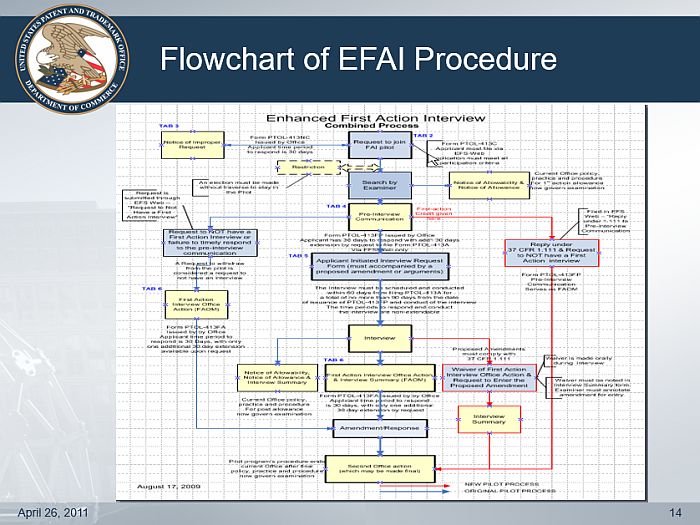 Although the USPTO mapped out what should happen next in various scenarios, working out with the examiner who would do what when often felt like a game of choose-your-own-adventure, with neither of us knowing who was supposed to make the next move.

Stakeholders who are planning to avail themselves of this program should be sure to do so by January 15, 2021.

Although the First Action Interview Pilot Program has not been popular, interview practice in general has become a near-routine aspect of patent prosecution. According to the Director's Forum blog, "the percentage of applications having at least one interview is now at an all-time high, having risen from 19.6% at the beginning of FY 2010 to 38.1% at the end of FY 2020." This graph from the blog highlights this trend: 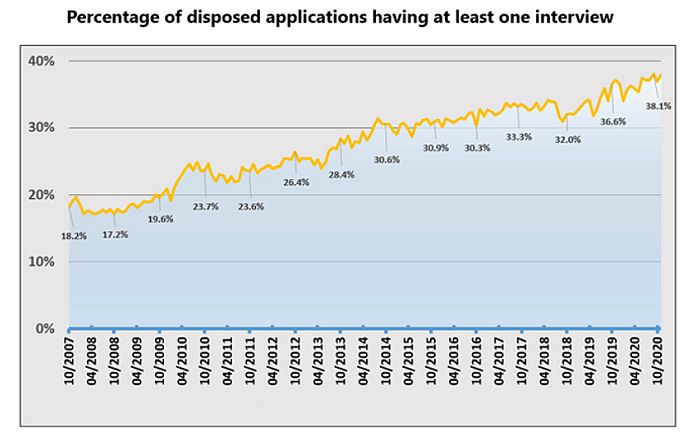 The USPTO's Interview Practice webpage has a number of resources to promote and facilitate interview practice. In my experience, most examiners are willing to grant interviews even at later stages of the examination process, and most interviews are productive. Even when "no agreement was reached," interviews usually result in a better understanding of each other's positions and possible avenues for advancing prosecution.