Welcome back to The Week in Weed, your Friday look at what's happening in the world of legalized marijuana.

When we last checked in on  Mississippi, the governor said he would not call a special session of the legislature until he saw a bill he could sign.  He seems to be pleased with what has emerged from negotiations over the issue, as he now says a  session could be called within days.  The only fly in the ointment?  State Agriculture and Commerce Commissioner Andy Gipson.  He  opposes the idea of legalizing medical cannabis, and said, "This is not what people elected me to do, be a marijuana kingpin."

Members of the Pennsylvania House  introduced a cannabis legalization bill late last week.  This is not their first attempt at permitting adult-use marijuana, but New Jersey's emerging market has brought the issue to the fore yet again.  The governor and lieutenant governor are both on board, but the Senate may be more of a challenge.

The  roller coaster ride that is the Illinois cannabis lottery continues to provide thrills and chills.  More lawsuits have been filed over licensing this  month (subscription required).  The plaintiffs allege that their applications were wrongly rejected or that they weren't given time to correct errors in their paperwork.

From our friends at Politico's Morning Cannabis:

DC ADVOCATES RALLY AT CAPITOL — A 51-foot inflatable joint sat outside the Russell and Dirksen Senate Office Buildings on Tuesday for more than four hours, surrounded by advocates urging Congress to pass decriminalization legislation and to leave the Harris rider — which has prohibited Washington, D.C. from taxing and regulating a marijuana industry for almost seven years — out of the next funding bill. The highlight of the rally, however, was the Saint Bernard named Chance who came to support its owner [see photo]. Chance was a very good boi. 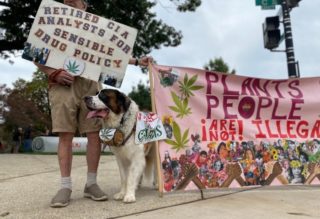 Advocates planned their rally in the park outside two Senate office buildings in hope of starting conversations with staffers, though the overwhelming response from onlookers was to smile or laugh and snap a photo. The rally comes on the coattails of D.C.'s city council  scheduling a hearing [go.politicoemail.com] to legalize the sale and regulation of cannabis. DC voters approved recreational cannabis sales in 2014.

Stay safe and be well everyone – we'll see you next week!