The European Commission has committed to an 80 percent to 95 percent reduction in greenhouse gas, or GHG, emissions by 2050. The transport and power sectors produce a large proportion of GHGs. Current plans to meet this goal involve decarbonizing the power sector to produce up to 80 percent of electricity from renewable energy sources, or RES.

The European Union transport sector is the largest consumer of energy, most of which comes from hydrocarbon fuels. Road makes up the bulk of transportation usage, with marine, aviation and rail having relatively small shares; about 61 percent of the sector's GHG emissions are attributable to cars. The EU has a rather ambitious target of a 60 percent reduction of vehicle emissions by 2050. One of the methods it proposes to meet this target is to deploy 200 million electric vehicles, or EVs.

Given that Europe has a vehicle fleet of around 290 million, this target implies that 70 percent of fuel-based vehicles will have to be replaced by electric versions by 2050. To say this is a challenge may be an understatement, as it not only requires vehicle replacements, but a transformation in infrastructure and the power sector.

If the majority of EV owners charged their vehicles at home (primary charging location) in the evening, residential peak demand would increase dramatically, potentially by up to 40 percent. Thus, low-voltage distribution grids are likely to require expensive upgrades.

Furthermore, to-date, development of a comprehensive and workable charging network has been fragmented and incremental. Charging systems need to be fast and standardized across the industry and countries. This will require cooperation and significant investment. The current slow charging speed and the necessity to charge frequently creates resistance from the public to switch to EVs.

A number of European cities aim to ban internal combustion vehicles to incentivize production and purchase of EVs. Is this a well-thought-out strategy? We don't think so.

The focus of such a policy is solely on emissions when in operation on the road. But EVs are not zero-emission when viewed across their entire lifecycle. Many individuals and policymakers forget about the carbon emissions produced during extraction of the requisite raw materials, combined with the production and disposal of vehicles. The production of EVs are arguably more energy-intensive than conventional vehicles and require additional materials for their batteries.

Another problem is whether sufficient quantities of the raw materials needed to produce 200 million electric batteries are even available, at any price. 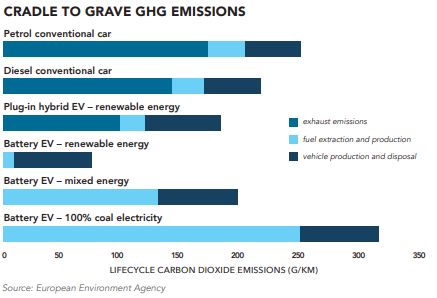 Batteries for EVs contain varied combinations of lithium, cobalt, graphite and nickel. Based on our estimates, about 10 percent and 15 percent of the world's lithium and cobalt reserves, respectively, may be required to manufacture 200 million additional batteries to meet the EU's target. If extrapolated for the rest of the world, automobile manufacturers would need some 31 percent and 69 percent of global reserves, respectively.

This is simply not realistic. The production of an additional 200 million EVs in Europe alone by 2050 means that annual lithium production would have to more than double to meet EU demand and increase fourfold if world EV targets are similar.

In the last 15 years, cobalt demand and production has more than doubled. Prices have more than doubled to about $56,000 per tonne. Deposits of cobalt are rare, however, and proven reserves have remained effectively the same despite the rise in prices. Unless additional cobalt deposits are located (which seems unlikely at present), demand from significant increases in battery production will result in global cobalt reserves being depleted by the 2040s.

The added complication regarding cobalt is that most reserves are in the Democratic Republic of Congo, or DRC, a country historically riddled with civil war, corruption, instability and allegedly unethical mining practices. There is a looming fear of mineral resource industry re-nationalization. Also, China's expanding influence in Africa has resulted in Chinese state-owned companies controlling much of the DRC's cobalt production.

Given China's ambitious EV targets, that does not bode well for cobalt supplies to other countries. 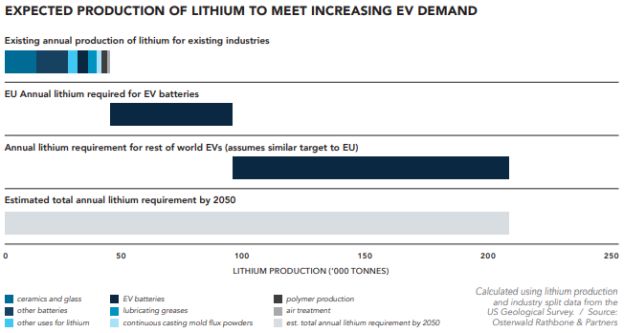 Recent studies show that conventional vehicles produce between 10 percent and 27 percent more carbon in their lifetime than EVs running on the existing European electricity mix of nuclear, renewables and hydrocarbons. EVs require some 70 percent more energy, however, during production. Thus, lifecycle GHG emissions from EVs are only marginally less than those using traditional hydrocarbon fuels. Therefore, the presumed "green" benefits arising from shifts to electric vehicles are meaningless unless the EU radically changes how its electricity is generated.

European power generation faces daunting challenges if European Commission targets are to be met by 2050. The intermittent nature of renewable energy, coupled with limited storage, makes it difficult to meet peak demand. Government policy and subsidies have skewed investment toward renewables; this cannot go on, so that in a truly competitive market significant new investment may struggle. The counter to this is that new technology may make it easier and cheaper to invest.

For renewable energy to be truly efficient, the European transmission grid must be integrated between countries. This will facilitate balancing differences in generation and consumption across Western Europe. Today, however, the grid is fragmented, creating barriers to achieving emission reduction targets; developing adequate interconnection and ensuring efficient existing operations would require significantly larger transmission capacity. It has been estimated that this upgrade may cost more than €180 billion, a level of investment which many countries will resist.

Eventually new renewable, battery or hydrogen storage technologies will create a step-change in energy generation, storage and/or usage. But until then, hydrocarbon fuels will remain a key ingredient in the energy mix. The internal combustion engine vehicle will be on the road in one form or another for quite a long time to come.

Originally published by BreakBulk, May 2018.