This is the second part of our article series where we provide a summary of the results of the recent study jointly conducted by the European Patent Office (EPO) and the Japan Patent Office (JPO) that aimed to provide patent applicants and practitioners with insights into how each office examines applications directed to computer-implemented/software related inventions.

The study can be found  here, and herein references to "the study" refer to this document.

The prior art discloses a robot apparatus having a sensor, a transmission section, a reception section, and a control section as recited by claims 1 and 2. However, the information in the prior art is information on a type of the object as specified by a server. The invention and prior art are indicated in the figures below (taken from the JP Guidelines, Annex A, Case 35, also found on page 3 of the study): 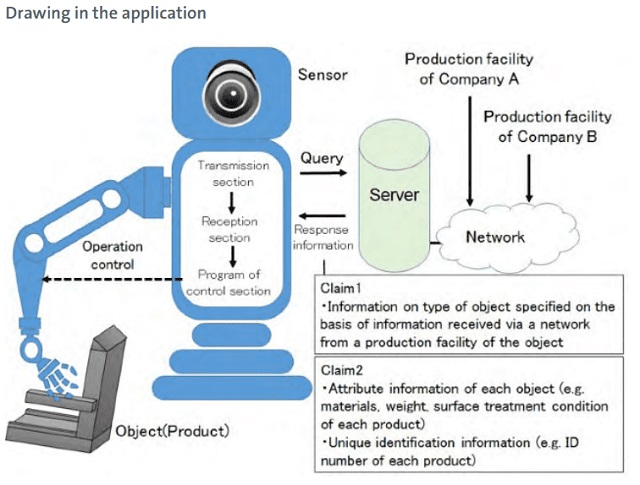 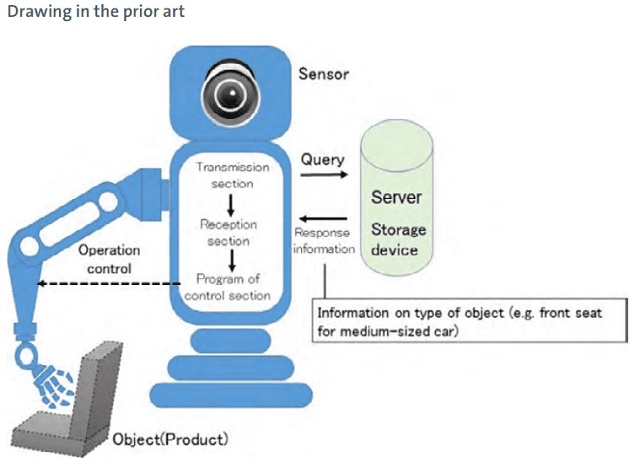 Each of these cases is taken from Annex A, Chapter 1, of the Japanese Guidelines where they are presented, respectively, as cases 46, 47, and 48.

This case's single claim relates to a sugar content estimation system comprising a model generation means. The inventive concept of the claim relates to the model generating means being for generating a determination model through machine learning based on the input of a face image of a person, and from which a sugar content of a vegetable, if that vegetable were to be produced (e.g. grown) by that person, is output based on training data containing facial images and vegetable sugar content.

Essentially the invention allows the sugar content of a vegetable to be estimated by a machine learning model, such as a convolutional neural network (CNN), based on the facial features (such as head length, face width, nose width, and lip width) of a person that is to produce the vegetable. The description mentions a correlation between facial features and the sugar content of a vegetable produced by the person, with "sugar content" being determined at a predetermined time after seeding for each vegetable type.

However, in view of common general knowledge, the skilled person is not able to presume a relationship between facial features and a sugar content of a vegetable produced by that person and, on this basis, both offices found this application to lack sufficiency.

Before the EPO, the desired technical effect (outputting the sugar content) is expressed in the claim. Under Article 83 a claimed invention may lack reproducibility if the desired technical effect as expressed in the claim is not achieved1 and the EPO concluded that this case was insufficient. Specifically, although the description teaches that a CNN is trained to learn the correlation between facial features and sugar content, the skilled person would doubt the correlation, whose existence is essential for achieving the technical effect of the claim.

The JPO concluded similarly. Whilst the description discloses that the correlation exists, it does not disclose what the correlation may be, and it therefore cannot be presumed that it exists at all. It is therefore not possible for the skilled person to produce the claimed invention.
In cases such as these where the application as filed does not provide a single example or other technical information from which it is plausible that the claimed invention can be carried out, the EPOs Guidelines for Examination state (at F-III, 4) that the burden of proof regarding the application being sufficient rests with the applicant. The JPO stated that the applicant would need to prove that the correlation between facial features and sugar content can be inferred. For overcoming this objection, it is not sufficient to submit experimental results that support the existence of the correlation.

This case contains a claim to a business plan design apparatus wherein "advertisements", such as banner ads, product listing ads and direct emails, and "mention data", such as reviews of the product or advertisements in social media, web articles, and blogs etc., are used for training a machine learning model. The output of the machine learning model then predicts a future sales quantity for a product based on current advertisement data and mention data and a past sales quantity of that product. The apparatus can further plan a quantity of the product to be produced based on the future sales and an amount of currently stored stock for that product.

As the reader will know, the EPO is unlikely to look favourably upon such a claim in an inventive step analysis. In fact, the EPOs assessment of this claim in the comparative study concluded that it was not necessary to examine it for compliance with Article 83. Rather, this case would be refused for lacking inventive step for the claim defining the mere automation of a business method.

More specifically, because the claim is directed to an apparatus it is not excluded from patent protection under Article 52(2), but since the claim is drafted to refer to a general "means", it does not imply any concrete, technical implementation that goes beyond any general-purpose computer, and the method that the apparatus is adapted to carry out is non-technical. In other words, it could be said that when examining such a claim, the prima facie lack of inventive step would be so apparent that the EPO may not take the time to examine compliance with other articles.

The JPO however did consider the claim for sufficiency and concluded that it was sufficient. Unlike Case I above, although a correlation between web advertisement data and mention data and sales quantity was not disclosed, it could be presumed that one existed in view of common general knowledge. Given this, the office concluded that the skilled person could build the claimed estimation model using a universal machine learning algorithm with appropriate training data.

Were it not for the EPO's decision to refuse this claim for inventive step without providing a detailed discussion of sufficiency, we consider that it would have concluded similarly.

The description mentions that the quick reaction capability score is a number between 0 and 10 and that the learning model is generated using a known machine learning algorithm using training data that associates a score with an image of a driver in various situations. For example, if the driver is holding the steering wheel, then it is determined that the driver can safely operate the vehicle themselves than if the driver was eating etc.

In this case, both the EPO and the JPO concluded that the claim complied with the requirement of sufficiency.

The EPO concluded that, as for Case I, the technical effect is recited by the claim, and therefore it is to be considered whether the application contains sufficient information for the skilled person to reproduce it. Unlike for Case I however, the skilled person is able to determine the claimed model from their common general knowledge. In particular, according to the description, the training data that is input into the machine learning algorithm contains images of seated drivers that are manually evaluated to set a quick reaction capability score. Examples of how to do this are also given. Therefore, the skilled person can choose a machine learning model and train it with a sufficient number of training images. In this case, the model itself is therefore able to correlate the behaviour captured in a given image with similar behaviours as depicted in the images used to train the model.

The JPO concluded similarly. In particular, given the example training data in the description of driver images and associated numerical parameters, the correlation between an image of the driver and their capability to react quickly could be presumed and the skilled person could derive a model that estimated the claimed output.

As can be seen from these cases, there were no significant differences in the two offices' approach to assessing novelty and sufficiency. This is not unexpected since the standard according to which novelty is assessed is arguably one of the most consistent worldwide, and regarding sufficiency we consider Article 83 EPC to be similar to Article 36(4) JPA.

Nevertheless, although the cases discussed in this article did not present diverging approaches between the offices, they do at least demonstrate some clear advice for applicants who wish to apply for patent protection both in Japan and in Europe as far as sufficiency is concerned.

For case I, both offices refusing the claim due to insufficiency was due to the correlation between the input and output (essentially what the machine learning model was being asked to do) not being clear from the description or the skilled person's common general knowledge. In contrast, in case III, it was immediately obvious that the correlation exists. Despite that in all cases a "general" machine learning model could be employed to implement the invention of each claim, for the requirement of sufficiency to be met it is important that the invention be reproducible. As we saw with case III, one of the ways of meeting this requirement of reproducibility is to include training data that renders the technical effect plausible, and our advice to practitioners would certainly be to examine what is disclosed in the application to enable the technical effect so that applications do not encounter any problems when being examined for compliance with Article 83 EPC.

ARTICLE TAGS
UK Intellectual Property Patent Technology New Technology
POPULAR ARTICLES ON: Intellectual Property from UK
Ask The Expert – NFTs And Intellectual Property
HGF Ltd
Non-fungible tokens (NFTs) are a hot topic at the moment and when new technology such as this meets existing laws, things can get interesting.
Intellectual Property Infringement: Directors' Personal Liability
Humphreys Law
Remedies for intellectual property infringements include damages or, at a successful claimant's election, an account of profits.
Because AI Is Worth It
Marks & Clerk
The 4th Industrial Revolution is characterized by a fusion of different technologies including artificial intelligence (AI), 3D printing, quantum computing, and robotics.
Copyright Dogfight
Marks & Clerk
On 6 June, Paramount Pictures, the production company behind Top Gun: Maverick, was sued for copyright infringement in the USA by the heirs of Ahud Yonay
Patents In Music On World Music Day
J A Kemp LLP
World Music Day, or Make Music, was launched in 1982 in France as the Fête de la Musique, it is now held on the same day in more than 1,000 cities in 120 countries. In this article, we explore some...
Incentives In IP To Fuel To The Green Revolution
HGF Ltd
As part of its commitment to achieve net zero by 2050, the UK government has published a ten point plan for a Green Industrial Revolution. The plan focuses on stimulating development in...
FREE News Alerts
Sign Up for our free News Alerts - All the latest articles on your chosen topics condensed into a free bi-weekly email.
Register For News Alerts
Article Tags
UK Intellectual Property Patent Technology New Technology
Similar Articles
Powered by mondaq AI
MATCH
52%
Artificial Intelligence Inventions In Healthcare – Can You Patent Them In Europe? HGF Ltd
54%
Machine Learning And Patents – A Guide For Patent Attorneys In Chemistry And Life Sciences Gill Jennings & Every
53%
Patenting Artificial Intelligence At The European Patent Office Marks & Clerk
48%
Obtaining Patents For Artificial Intelligence And Machine Learning In Europe Dehns
46%
Review Of EPO Software Decisions In 2021 J A Kemp LLP
Mondaq Webinars
Global Life Sciences M&A: Market Overview and Trends
Dechert
Webinar London UK
Funding or insurance? Commercial Approaches for Litigation and Arbitration
Erso Capital Advisors LLC
Webinar California United States
More Webinars
Comparative Guides
Anti-Corruption & Bribery
Artificial Intelligence
Banking Regulation
Blockchain
Cartels
More Guides
Mondaq Advice Centres
UK
Coming to and Investing in the UK
Global
Trademarks in SAARC Countries
More MACs