We examine the global stocks:use ratio of cereals and oilseeds at a time when the worldwide stock levels have fallen dramatically.

The global maize stocks:use ratio has fallen dramatically since the mid-1980s from almost six months' supply (46% of the year) to just over seven weeks' supply at year end (14%). However, as the chart demonstrates, this is a situation that the world has been in before. Back in the early 1970s, the United States Department of Agriculture (USDA) data suggests global stocks fell to as low as six weeks' supply (12% of the year). This fall is more extreme for maize, the single crop that accounts for three-quarters of all coarse grain production and almost 80% of trade. 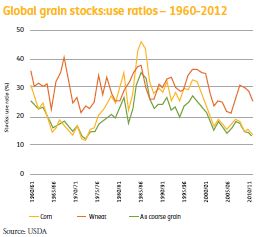 Only 1% of US maize is used for human consumption, the rest being processed for biofuels or fed to livestock for milk and meat production. Clearly, the percentage used for food will be higher in developing and poorer nations, but the point is that when prices are very high people still need to eat, but if the economics do not favour bioethanol manufacture, the biofuel plants will reduce production down to contractual or legal minima. Some flexibility is therefore created, enabling the world stocks to fall. Indeed, the USDA expects global cereal usage to fall this year. This will be the first time global grain consumption will have fallen since 1995, when prices were also very high. So does this imply a bull market? Not if the information is already built into the marketplace, but it does help explain why prices are high.

Looking more closely at the global stocks of maize, we notice that the proportion held in China has gradually risen to over half. Thus China now holds more maize than the rest of the world combined. For a country that trades only about 1% of its demand and production, this effectively means this tonnage can be discounted from the calculation as it is unlikely ever to see the light of the global marketplace. The last time China exported more than a million tonnes of maize was back in 2006. In fact, over the last two years, the USDA estimates that China will have imported 7.5 million tonnes of maize, not bad for a country that is effectively self-sufficient (its consumption is equal to its production, hence the rise of stocks). China has not previously imported such a quantity over a two-year period since the USDA's records began in 1960. So what is going on? China is protectionist, and recognises the importance of maize, especially to its pig industry. It now produces half of all global pig meat, from having produced very little 30 years ago. Pig meat is a major growth sector in China as the emerging wealth moves the country to a more sophisticated diet.

In the meantime, global wheat stocks are traditionally more consistent and have not varied from the 20% to 40% range. This is largely because of two reasons. Firstly, the demand for wheat varies less than that for maize as it is more of a staple foodstuff globally. Secondly, while it is only one crop, the range of types and specifications is greater than for other grains, meaning a range of stocks is required. Incidentally, China holds about 30% of global wheat stocks (meaning it holds about twice as much wheat per citizen as anywhere else) and like maize is virtually trade neutral.

There should be reasonable support for cereals prices as we head towards harvest 2013. This is reflected in current market sentiment with November 2013 LIFFE wheat futures values currently trading around £185 per tonne.

While we are busy commenting on the tight supply and demand situation of the cereals, it is worth noting that the stocks:use ratio of rapeseed is at its lowest for 15 years, having fallen from a year-end stock level of 15% in 2009 to a meagre 4% this year. Indeed, sunflower stocks have not been this low since 1985, over a quarter of a century ago. Of the US soybean exports (the US normally accounts for over 40% of global exports), over half have apparently already been delivered and three-quarters committed. Yields as we know are down and supply is clearly tight. This year, more than for many previous years, the world will rely heavily on the southern hemisphere crop when it is gathered and counted. Again, this seems to suggest that there will be no great price collapse in oilseed prices for harvest 2013. Conversely, livestock farmers may be stuck with high protein prices for some time too.