by Giles Murphy
Smith & Williamson
To print this article, all you need is to be registered or login on Mondaq.com.

Our 18th annual survey of the legal sector explores the latest issues and trends affecting law firms and the legal market. This year, 119 of the UK's top 250 law firms took part, including half of the top 40 and 54 of the top 100 firms.

Confidence within the legal sector appears to have taken a downward turn, with only 61% of respondents upbeat about the business outlook for the next 12 months, compared to nearly three-quarters last year. This fall in optimism is reflected in an 11% rise, to 38%, in the proportion of respondents who are not confident about the year ahead.

These results are not altogether surprising given that the UK economy has not bounced back in the way many had hoped and coupled with continuing uncertainty in the eurozone. 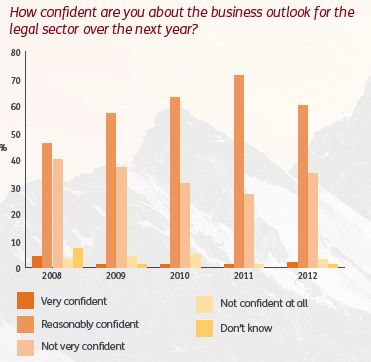 The fragility of the UK economy, pressure on fees and maintaining profitability are the overriding areas of concern for both the sector as a whole and individual firms.

Fewer transactions, resulting in reduced demand for legal services and increased competition among practices, are inevitably a source of concern for many firms and continue to impact on their bottom-lines.

There has long been an expectation of high levels of merger activity and this year is no different. A resounding 84% of respondents anticipate an increase in mergers over the coming year - up 4% on last year. Cultural differences, integration and financial performance are considered the three areas of greatest potential difficulty in determining whether mergers get over the line.

Nearly three-quarters view the Legal Services Act as the catalyst for future consolidation, with the key drivers being to strengthen existing service lines, grow the client base and expand the size of the firm.

As it becomes increasingly difficult for firms to expand organically, there appears to be a growing appetite for acquiring new teams or service lines. In the last year, over three-quarters of respondents engaged in discussions about merger or acquiring a team. Around 25% of respondent firms took on one new team and an additional 13% acquired two or more teams. Interestingly, almost a third of the teams changing hands included 11 or more people, which suggests that law firms are prepared to invest in larger teams than they have been in the recent past. 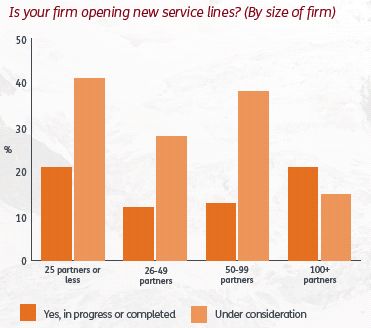 A third of respondents are opening a new office or considering it, with another half launching a new service line or looking into it. This underlines the challenges of organic growth and the need to differentiate services in order to maintain profitability. Could this be a knee-jerk reaction to challenging market conditions and would firms be better off sticking to what they do well instead of potentially diluting existing service lines?

Firms continue to review their business structures in part to enhance the level of cash received by partners. Just over half of respondents have introduced a service company or are in the process of doing so, while a fifth have this option under review. The service company route has clearly been well tried and tested and is now considered routine practice.

In contrast, only 13% of firms have introduced a corporate member or are in the process of doing so, with another quarter considering it. It would appear that a corporate member is generally viewed as an effective way to retain profits but complex to implement.

For those looking to open an overseas office, a corporate holding company is an important tax-planning vehicle. Yet only 13% of respondents are setting one up or considering doing so, compared to a significant 63% who said it was 'not applicable'. This suggests that there is either a lack of awareness about the structure or those firms with representation in overseas jurisdictions have already explored this option.

Following the proposed reduction in income tax to 45%, a significant 70% of respondents said that tax planning is part of the firm's strategy to lower the overall rate of tax for partners, but nearly 30% said that it is not. This suggests that some firms feel they have already put appropriate tax structures in place and the onus is on individual partners/members to manage their own personal tax affairs.

Firms continue to make important changes necessary to manage their business effectively - although not to the same extent as last year. 8% of respondents have closed offices or are planning to do so (last year, the equivalent figure was 17%) while half have re-organised their management structure or are considering it. By comparison, last year 38% of participating firms re-organised their management structure, with another 27% considering it. Perhaps the majority of firms have been through the worst but are continuing to keep a watching brief on these issues following the upheaval of the last couple of years.

The survey confirms a long-term trend that is gradually seeing the phasing out of the full distribution model, with firms adopting a more 'corporate' approach to bolstering their finances. For the second-year running, half of firms said they are looking to retain more funds within the business.

Against this backdrop, as seen last year, 45% of firms have de-equitised partners or are planning to do so. 10% of firms are organising capital calls on partners with another 12% keeping this option under review.

While many firms continue to use the traditional lockstep reward mechanism for partners, merit awards seem to be gaining ground. Two-thirds of firms still use lockstep, while just over half are also using some form of merit-based award. Nearly a quarter of respondents allocate more than 25% of their profit share on discretionary terms, while 10% of practices allocate more than 50%. Looking ahead, a quarter of respondents expect these figures to rise in the next few years, but a significant 69% believe they will stay broadly the same.