Inflation is not dead. but merely hibernating and about to wake up

As expected, the largest fiscal contribution in numerical terms has come from the US at near $3tn, followed by Germany and Japan at just over $1tn. The largest fiscal contribution in relation to the size of the country's economy, however, has been Germany with just over 30% of GDP, followed by Italy at 27%. The US has lagged behind due to partisan disagreements between the House and Senate a few months before US elections in November. Last, but not least, the UK and France have provided similar fiscal support packages of approximately 17% of GDP.

Alongside fiscal policy and despite not having much room to play given low interest rates, monetary policy has also made its mark as depicted in in Figure 6 on the following page. It is worth noting the relatively contained response of the ECB which following the latest German constitutional court's ruling may have a smaller part to play going forward, especially as German Chancellor Merkel and French President Macron are trying to push through the franco-german EU recovery fund which would signify the first step towards a fiscal union.

The critical role of SMEs

The significance of SMEs cannot be overstated, being the backbone of major economies and widely representative across food, accommodation and tourism sectors hit the most during this pandemic. In the UK, for example, 60% of all employment is with SMEs as per Figure 7 below.

Figure 7 - Importance of SMEs in the UK

The significance of SMEs may be high in the UK, but it is even higher across Europe. To put into perspective, the UK has the smallest share of SMEs to overall company turnover when compared with the EU. Figure 8 on the following page below highlights the importance of SMEs (as a % share of overall turnover) and how it declines from Malta on the top left with 79%, to Italy at 67%, Germany at 55% and UK 48% at the bottom right of the chart. 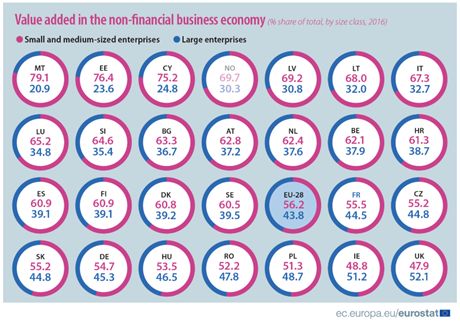 Lastly, in the United States small businesses (less than 500 people) employ just under 50% of the total private workforce. This becomes particularly pertinent during economic slowdowns and especially during crises like those experienced today with nearly 1 in 4 Americans having lost their job (temporarily or permanently).

Figure 9 highlights that although 37.3% of all lost payrolls in April 2020 were for the largest firms with over 1000 employees, 56.2% of all losses were represented by firms with less than 500 employees. Furthermore, smaller firms have had a disproportionate loss of payrolls with those employing 20-49 worst off at 21.4% of all those employed (Figure 10 on the following page), whereas employees in larger firms were relatively better protected with only 13% of those positions lost. It is evident that those working for larger firms are protected the most.

There have been a plethora of symbols and letters to denote the expected economic recovery out of Covid-19. The sharp equity market rally since the lows in March suggests a 'V' recovery following the unprecedented policy stimulus provided. In my view, this is too optimistic. The stimulus may have been unprecedented in both speed and size (if not by coordinated action) but so has the economic impact and in particular across the SMEs. Hence, I would expect the recovery to be slower than market expectations with a 'U' instead of a 'V' and a subsequent rise in market volatility. On a more positive note, however, the latest data on Covid-19 alongside continuing government support suggests we will be able to avoid an 'L' type scenario.

And finally, what is the impact for pension funds?

Roger Bootle's 1996 book "The Death of Inflation" has turned out to be quite prescient. Despite the trillions of dollars pumped into the global economy by major central banks alongside negative interest rates, inflation has continued to defy economists, politicians and central bankers. Will the recent Covid-19 fiscal and monetary stimulus make a difference?

Abundant liquidity and inflationary targets have thus far failed to deliver rising prices. This may have been partly due to demographics, technological advancements and globalisation which characterized the period since the GFC. But this is changing: (1) globalisation is receding with supply chains coming closer to home where fixed costs are higher, alongside elevated trade tensions and tariffs; (2) unlike the policy support following the GFC which targeted systemic institutions, the current stimulus is broad and widespread amongst households and businesses; (3) the level of stimulus is unprecedented as discussed earlier. Hence, I expect to see government bond yields rising in anticipation of higher prices, with more lenient central banks and policy makers willing to see inflation eroding part of the huge levels of debt the global economy will have amassed by the end of 2021. We may not see an imminent rise in prices as the global economy is still on the back foot, but forward looking asset prices should start taking this potential structural shift into consideration.

1. HM Treasury, Forecasts for the UK economy: a comparison of independent forecasts, May 2020