Following a lengthy consultation process we finally have certainty as to the shape of future accounting in the UK and Republic of Ireland.

FRS 100 sets out which financial reporting standards apply to which entities when they intend to produce financial statements that give a true and fair view.

For those entities currently required to apply EU-adopted International Financial Reporting Standards (IFRS), for example fully listed groups or AIM listed groups, they will continue to do so. There is no extension of the existing rules on when the use of EU-adopted IFRS is mandatory. Qualifying entities as defined in FRS 101 (see the later article in this newsletter) may use the reduced disclosures of that standard. Small entities (defined by reference to the limits in the Companies Act 2006 but not restricted to companies and LLPs) may, as now, choose to use the Financial Reporting Standard for Smaller Entities (FRSSE) although, as discussed below, there have been some amendments to that standard.

All other entities will be required to apply FRS 102 unless they choose to adopt EU- adopted IFRS.

If the financial statements are prepared in accordance with FRS 102 or the FRSSE, Statements of Recommended Practice (SORPs) will apply where relevant. Many of the existing SORPs (for example those applying to LLPs and charities) are being updated to provide guidance on the application of FRS 102, however some SORPs will be withdrawn when the new regime becomes effective.

FRS 100 has a mandatory application date for accounting periods beginning on or after 1 January 2015, although early adoption is permitted.

The standard setters have found it necessary to make some consequential amendments to the FRSSE, including reducing the rebuttable presumption as to the maximum economic life of goodwill and intangible assets from 20 years to five years, clarification of the requirement to make an annual assessment for impairments where any indicators exist and exemption from disclosing related party transactions between group members where any subsidiaries are wholly owned.

FRS 102 is the single standard that will replace all current SSAPs, FRSs, and UITFs. It will also bring UK GAAP closer to EU- adopted IFRSs as it was originally based on the IFRS for SMEs.

Since the first exposure draft was issued in 2010, the standard has been amended quite substantially to take into account comments received on the original and revised proposals.

The standard we now have includes a number of accounting options permitted in existing UK GAAP but which do not form part of the IFRS for SMEs.

While there will be much that is familiar to UK GAAP preparers there are going to be some areas of significant change which will have an effect on the reported results and financial position of many entities. Some of the major differences are considered in the table below. 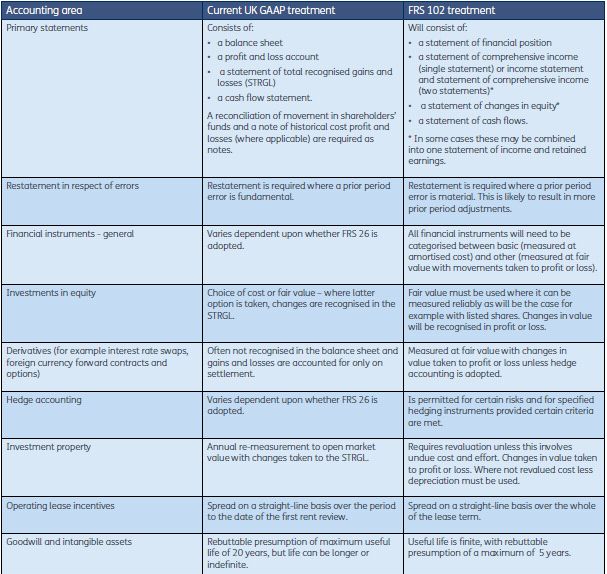 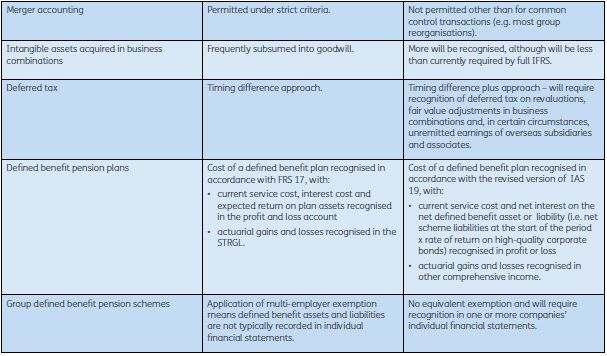 The first set of FRS 102 compliant financial statements that an entity produces will need to include restated comparatives. The general principle is that all amounts and disclosures must be restated - however some exemptions do exist. An entity can choose which, if any, exemptions they wish to take advantage of.

* The date of transition is the beginning of the earliest accounting period for which comparative information is presented. For example, an entity with a December year end that does not adopt the standard early will have a transition date of 1 January 2014.

Subsidiaries and parent companies applying FRS 102 will be able to take advantage of certain disclosure exemptions, provided that they are included in the consolidated financial statements of an entity whose financial statements give a true and fair view and are publically available. These exemptions, and the circumstances in which they may be taken, mirror the concessions offered to IFRS preparers in FRS 101 as discussed in the following article.

The ASB had originally suggested a separate, supplementary standard containing guidance specific to public benefit entities (PBEs), for example charities and registered providers. However, the final version of the standard includes this guidance as part of a separate section in the standard (Section 34 on 'Specialised Activities').

Further amendments to the standard

The UK FRC has indicated that they intend to amend the financial instrument sections of FRS 102 to bring it in line with the hedge accounting and impairment provisions in the new standard on financial instruments in full IFRS (IFRS 9 Financial Instruments) that is currently being developed by the IASB. This will result in FRS 102 being amended prior to its effective date although the exact timetable of any amendments is dependent upon when the IASB finalises these remaining parts of IFRS 9.

Qualifying entities may take advantage of the disclosure exemptions only if:

The disclosure exemptions can be categorised into those that are equivalent to those allowed under UK GAAP, areas where disclosures are made on a group basis and certain other exemptions.

Items disclosed on a group basis

* not available for financial institutions

The disclosure exemptions in this category are permitted provided that the equivalent disclosures are made in the consolidated financial statements in which the entity is included.

Reporting entities can choose which of the exemptions they want to take and there is no requirement to apply all of them.

Qualifying entities with financial liabilities held at fair value that are neither held for trading nor derivatives will be required to apply certain of the disclosure requirements of IFRS 7. In addition, a qualifying entity that is a financial institution as defined in the standard will not be able to take advantage of any of the exemptions from IFRS 7 and IFRS 13 nor that from IAS 1's requirements with regard to capital management.

Any entity currently applying EU-adopted IFRS that adopts FRS 101 will be preparing Companies Act individual accounts and not IAS individual accounts. The presentation of the financial statements will therefore need to be in accordance with the Companies Act, and FRS 101 includes a small number of amendments to the measurement and recognition criteria to maintain compliance.

FRS 101 applies for accounting periods beginning on or after 1 January 2015, although early adoption is permitted.

CONSOLIDATION EXEMPTION FOR INVESTMENT ENTITIES - AN AMENDMENT TO IFRS10

Subsequent to IFRS 10 Consolidated Financial Statements being issued in May 2011, the IASB has addressed the accounting implications of the new standard for investment entities. These are entities where, because of the nature of their investments, information about the fair value of an investment in a subsidiary may be more relevant than consolidation of its individual assets and liabilities. In particular the IASB has considered the circumstances where relief from consolidation might be appropriate. As a consequence an amendment to IFRS 10 was issued in October 2012. The amendment will exempt many investment funds and similar entities from the requirement to prepare consolidated accounts.

The amendment defines an investment entity as one that:

An entity meeting the definition must also have regard to certain characteristics as set out below. While failure to meet one or more of the characteristics does not preclude classification as an investment entity, the amendment does indicate that additional judgement may be required.

The amendment, which applies for periods beginning on or after 1 January 2014, can be applied early and is retrospective.

LEASING – THE NEXT INSTALMENT - THE NEW EXPOSURE DRAFT

The efforts of the IASB to change lease accounting have stretched over a number of years. Their 2010 exposure draft received considerable criticism and since then a great deal of work has been done to refine the detail of how a new model might work, while keeping the overarching principle of having all leases included on the balance sheet. In May the IASB and the US Financial Accounting Standards Board (FASB) published an exposure draft of their revised proposals.

The fundamental principle of bringing what are currently classified as operating leases onto the balance sheet remains. The key changes in the new exposure draft are as follows:

The comment deadline is 13 September 2013, after which the boards "expect to have received sufficient information to proceed with and finalise the standard". The effective date of the new standard has yet to be decided.

FINANCIAL REPORTING ROUND-UP - AN OVERVIEW OF THE REPORTING LANDSCAPE

The revised exposure draft on revenue recognition issued in 2011 was discussed in the Spring 2012 edition of Financial Reporting. The IASB has indicated that it expects to issue the final standard in the third quarter of 2013. In the revised exposure draft it was anticipated that the standard would be issued in the second half of 2012 with an effective date no earlier than 1 January 2015, to allow companies providing two years of comparative data adequate time to prepare. If a similar timetable is now followed, it would indicate a standard with an effective date of 1 January 2016 at the earliest, although this could be even later.

The IASB uses the annual improvements process to make necessary, but non-urgent, amendments to IFRSs. The latest improvements:

The amendments are effective for annual periods beginning on or after 1 January 2013, although entities are permitted to apply them earlier.

The table below summarises the effective dates for new and revised IFRS and IFRS interpretations. Those that are shaded have not yet been endorsed by the EU and the effective date will be contingent on successful endorsement. 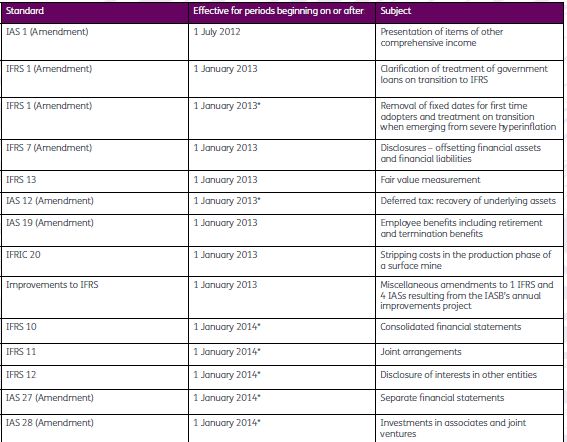 In addition, the following standards may be published by the IASB before the end of 2013. Standard title, effective date and EU endorsement will be confirmed following publication.