We'll be discussing two recent EU trade mark decisions: one deals with a product shape mark, the other with a slogan. EU decisions are, of course, influential in South Africa. Both decisions were discussed in the IPKat blog, a great source of IP material.

Product shapes - a case for a tablet (as in an iPad, not an aspirin)

Tablets like the iPad are big business and so, it seems, are the cases that we like to store our precious devices in.

In 2019, Samsonite filed an EU application to register a 3D trade mark comprising the shape/appearance of a tablet case. 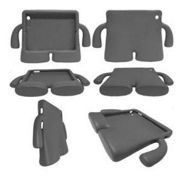 The application was filed in class 9, the class that covers all manner of things including laptops, tablets and smartphones.

The European Union Intellectual Property Office ("EUIPO") examination division rejected the application, saying that the mark was devoid of distinctive character. It said that the mark did not depart sufficiently and significantly from the norms and customs of the sector. Further, the most important elements of the mark were functional and necessary to obtain a technical result.

Samsonite took the matter on appeal. The board of appeal stated that it is well established that the average consumer normally perceives a mark as a whole, and does not engage in an analysis of the various details. According to the board, the evidence made it clear that the cases used for securing tablets often have decorative elements such as ears, eyes and handles/supports or stands that resemble legs. And why might that be? It's simple: children are significant users of tablets!

The board looked at the market and noted that the following two existing products were particularly relevant:

According to the board, both products, involve "quirky and eccentric designs" which feature the use of a cartoon-like figure that has arms and legs. The board said that consumers are accustomed to seeing products of this nature. It made the point that such features have the function of allowing children to hold the device and/or enabling the device to stand freely. It pointed out that there are various registered designs that are similar.

The board concluded that the public would not perceive the mark that Samsonite had filed as a badge of origin. It made the point that, taken as a whole, the mark would not "depart significantly from the norm". It would, said the board, simply be regarded as a variant.

Going back a bit

EUIPO's board of appeal has recently ruled on an application to register the trade mark Take 5 in class 32 for non-alcoholic drinks. But let's start at the beginning.

The examiner refused the application on the basis that the public would perceive the slogan as a promotional laudatory slogan intended to persuade customers to buy five units. According to the examiner, the mark would not be perceived as an indicator of commercial origin.

The board of appeal said that EUIPO works from the starting point that slogans are generally not regarded as indicators of origin, in other words they are not regarded as trade marks. It referred to an EUIPO report, which identifies non-exhaustive factors that might determine the distinctiveness of slogans. Amongst the factors:

In other words, slogans need to be a bit special.

The board mentioned slogan marks that have been accepted. Pretty good ones like "Wet dust can't fly", "Love to Lounge", and "It's like milk but made for humans."

The board of appeal dismissed the appeal, saying that the slogan was not distinctive. According to the board, the relevant parties here are both consumers of non-alcoholic drinks and English speakers. It said this: "The public will understand that the expression is an invitation to potential customers to take or buy products in a quantity of five. The invitation conveyed could also refer to a variety of five different types or flavours sold in one pack. Such invitations to take or buy are commonplace."

If English-speakers are indeed the relevant market, should there not have been consideration of the fact that for many people the expression Take 5 is likely to mean "have a rest". Rather than "hey greedy guts, take five items".

Shapes and slogans can function as trade marks and they can, in some cases, be legally protected.