Netherlands: S&P 500 Companies Are Listening: One Third Of New Board Appointments In 2018 Were Women

by Aniel Mahabier
CGLytics
Your LinkedIn Connections
with the authors

Gender diversification on boards was a prominent issue in 2018 and shareholders had never been more explicit in their expectations of companies. The CGLytics Review of Diversity in the Boardroom of S&P 500 Companies reveals the progress made by companies to improve female board representation and discusses new ways for identifying top candidates using new methods and tools.

Through research on the appointments and departures of S&P 500 company directors between 2017 and 2018, we can see evidence that companies are actively trying to improve gender diversity on boards. This is likely the result of investors pushing for greater female representation, along with media and legislators.

While overall female representation only grew by 1%, the following three data points demonstrate how S&P 500 companies are progressing:

1. One third of new board appointments in 2018 were women

2. Telecommunications Services have the highest representation of women on boards

Almost all industries saw an improvement in gender diversity of their boards between 2017 and 2018. The financial sector showed the greatest improvement, with female appointments up by 2 percent. While Telecommunication Services had a three-percent decrease in female representation in 2018, the industry still shows the largest representation of women on boards, at 28%. 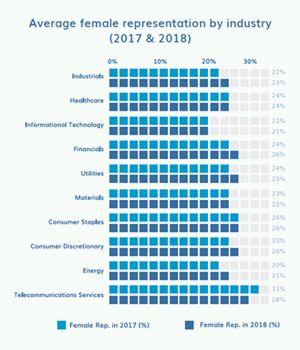 With female representation reaching 24%, we investigated how many more appointments are needed in order to hit 30% and 50% targets. We discovered that if the net is cast wider than the current 1,329 women sitting on S&P 500 boards, then an additional 1,227 female candidates are available (drawing from S&P Midcap 400 and S&P SmallCap 600 boards).

Getting ready for the coming season's gender debate

Boards need to be fully prepared for conversations around gender diversification this upcoming proxy season and companies should be ready to provide evidence of their efforts to improve female representations.

In addition to real-time governance risk intelligence and Pay for Performance analytics, CGLytics provides companies with a networking tool for discovering and connecting with top candidates for succession planning.