2015 was another active year for the Conyers Bermuda corporate practice. Our workflow paralleled trends in the global markets, which were characterised by a buoyant M&A sector and a skittish capital markets environment. Our continued ability to win mandates on the highest profile transactions in the jurisdiction has resulted in our maintenance of top tier rankings in leading legal directories. We are proud to have been described by our clients as having "unrivalled experience and expertise in Bermuda" – IFLR 1000, 2016.

Against the backdrop of slowed capital markets to which higher interest rates, low commodity prices and declines in China and Europe all contributed, Bermuda companies on the NYSE and Nasdaq still managed to raise approximately US$10 billion of capital in 2015 - more than twice the amount of any other offshore jurisdiction. Conyers advised issuers (including Axovant Sciences Ltd., the only new Bermuda company issuer to list on these exchanges) and underwriters on the majority of these transactions.

Global economic pressures contributed to an increase in M&A activity, as companies sought ways to take advantage of a low-inflation environment and to boost growth in an otherwise sluggish economy. Global deal volume reached a record US$5 trillion in 2015, up 37% from the previous year. M&A activity in the global insurance sector surged during 2015 with over US$143 billion worth of deals – three times the deal value recorded during 2014. This trend was evident in the Bermuda insurance market, where 21 M&A transactions were completed. Conyers advised on the majority of these transactions, including AXIS on its proposed amalgamation with PartnerRe.

In addition to the M&A activity in the insurance sector, Bermuda achieved full Solvency II equivalence, a status critical to conduct¬ing business within the European Union. Another notable development was the continued strength of Insurance-Linked Securities ("ILS"), as the number of ILS listed on the Bermuda Stock Exchange grew by 28% in 2015, valued at over US$19 billion. Conyers, again, was Bermuda counsel on the vast majority of these transactions.

Bermuda will host the America's Cup in 2017. Our corporate practice has assisted the regatta officials and participating teams with the establishment of local companies in support of the campaign to challenge Oracle for the "Auld Mug" in 2017.

This Year in Review highlights these trends and other notable transactions completed by our Bermuda corporate practice in 2015. We are grateful to our clients and the international legal advisors we work with and we look forward to building our relationships with you in the coming year.

We have set out below details of some of our most significant transactions of 2015.

The sale of The Milestone Aviation Group Limited ("Milestone") completed in January. Milestone is the world's largest specialist helicopter leasing company and was sold to GECAS for US$1.78 billion. Conyers has advised Milestone since its formation in 2010 by co-founder Richard Santulli, a veteran of the aviation industry. With an initial capitalisation of US$500 million, Milestone's fleet had grown to 143 helicopters valued at US$2.2 billion at the time of the sale, with more than 145 helicopters on order worth US$3.4 billion. Conyers provided Bermuda legal advice on the proposed IPO of the company and subsequent sale to GECAS.

We provided advice to Actavis, Inc. on its US$66 billion acquisition of Allergan Inc. which closed in March. The combination created one of the world's top 10 pharmaceutical companies by sales revenue, with combined annual pro forma revenues of more than US$23 billion anticipated in 2015. The deal is expected to generate more than US$8 billion in cash flow in 2016, enabling Actavis, Inc. to reduce debt. The company also anticipates approximately US$1.8 billion in operating and financial synergies to be achieved within one year of the closing.

In November, Anheuser-Busch InBev SA/NV. ("AB InBev") made a formal offer to acquire all of the shares of SABMiller plc ("SABM"), valuing SABM at approximately £71 billion in the aggregate (the "Potential Acquisition"). Conyers was involved as part of a global team advising one of the largest shareholders of SABM, BEVCO Ltd. on its participation in the transaction.

The Potential Acquisition, which is subject to regulatory approvals, is the largest ever offer for a UK company. If completed, it will be the world's third largest takeover ever, creating a global brewer that will become one of the world's leading consumer products companies. Dubbed "Megabrew" by analysts, the new company will be the world's largest consumer-staples maker by earnings, according to Exane BNP Paribas, generating profits of about US$25 billion. The enlarged brewer will have the No. 1 or No. 2 position in 24 of the world's 30 biggest beer markets.

AB InBev will finance the cash part of the Potential Acquisition from existing resources and third-party debt. It has lined up banks to raise US$75 billion in financing, a record commercial loan.

Bermuda's insurance industry experienced a year of milestones in 2015. In November, Bermuda received full Solvency II equivalence – joining Switzerland as the only jurisdictions to receive such an endorsement. The Island's government and business community worked toward equivalency for over six years. This achievement benefits the (re)insurance sector as it creates a level playing field for commercial insurers to conduct business within the European Union. Further, it was a record year for M&A tie-ups in the insurance industry. In all 21 transactions were completed, with our leading insurance team advising on the majority.

Conyers advised on the formation, licensing and capitalisation (US$1.5 billion) of Fidelis Insurance Holdings Limited and its wholly-owned subsidiary, Fidelis Insurance Bermuda Limited in June. The transaction represents the largest new start-up Bermuda Class 4 commercial reinsurer since 2005, and is the single largest insurance capital raising transaction for 2015.

Issuance of the first Chinese-sponsored cat bond – Panda Re Ltd.

The third quarter of 2015 saw the issuance of the first Chinese-sponsored cat bond, Panda Re, an indication of the ever-broadening acceptance of innovative structures – yet another endorsement of Bermuda as the jurisdiction of choice.

Qatar Reinsurance Company Limited ("Qatar Re"), the established reinsurance subsidiary of the US$4.3 billion Qatar Insurance Company ("QIC") group, completed its re-domicile to Bermuda, and was licensed by the Bermuda Monetary Authority as a Class 4 reinsurer in December. Qatar Re cited Bermuda's "decades of proven reliability", "uncontested best practices" and its anticipated full Solvency II equivalence as being some of the regulatory drivers for its move to Bermuda.

From a commercial perspective, Qatar Re also noted that the move will allow the company to expand its client base through additional products and underwriting expertise as well as an increased market scope and presence, and that it will support its ability to access and compete throughout the world's markets in a credible manner.

Shipping: In 2015, Bermuda's Department of Marine Administration registered 33 vessels, marking a banner year for ship registrations. Our shipping practice handled the majority of these new registrations, including the four vessels registered as part of Stena IMOIIMAX's Newbuilding Project.

Our shipping team also advised Team Tankers International Ltd. on its debt for equity swap and restructuring that resulted in 14 vessels registered in Bermuda and an exchange offer that resulted in a new Bermuda company listing on the Oslo Børs.

The Team Tankers International Ltd. ("TTI") transactions were of historic proportions in both Norway and Bermuda which resulted from the decision of the Eitzen Chemical shipping group to redomesticate to Bermuda. As part of the redomestication, the group undertook a restructuring that involved the transfer of about a third of its fleet from the Singapore ship registry to Bermuda. Simultaneous with the closing of the restructuring, the group launched a debt to equity exchange offer valued at approximately US$840 million that was unanimously accepted by its shareholders.

Following the debt to equity conversion, all shareholders of Eitzen Chemical ASA were offered shares in TTI pursuant to the terms of an exchange offer. There were also successful retail and employee share offerings that resulted in the shares of the new Bermuda holding company being approved for listing on the Oslo Børs in March. The successful exchange offer and listing valued the group at approximately US$300 million and resulted in TTI becoming the new holding company for Eitzen Chemical ASA. The listing of TTI brings the current number of Bermuda companies listed on the Oslo Børs to 13.

Aviation: Conyers' Aviation practice is at the forefront of the offshore airfinance industry, and represents many of the world's leading airlines and leasing companies on cross-border transactions.

In December, we advised Castlelake in connection with its US$713 million aircraft securitization. Castlelake Aircraft Securitization Trust 2015-1, is backed by 54 aircraft and six aircraft engines. The portfolio is on lease to 23 airlines in 18 countries. Castlelake will act as the servicer on the deal. Deutsche Bank and Goldman Sachs were the lead bookrunners on the transaction. Conyers also acted for Castlelake in connection with its initial deal in the ABS market in March 2014, a US$515.6 million securitization, which was named Airfinance Journal's Innovative Deal of the Year 2014.

Bermuda's re-emergence in the investment fund industry continued in 2015. The Island's Insurance-Linked Securities ("ILS") sector which includes ILS investment fund structures had a record-setting performance, which resulted in a record number of new ILS issuances. The value of these securities listed on the Bermuda Stock Exchange topped US$19 billion, an increase of 28% over 2014 (see graphics below).

In 2015, our funds team supported new legislative initiatives and lobbying activities, which have effected change and ultimately marketability of Bermuda fund vehicles on a global stage. Working alongside government and business partners in Bermuda, we have advised on revisions to the Limited Partnership Act and the new Contracts (Rights of Third Parties) Bill. In conjunction with the Bermuda Business Development Association, we have supported the Regulatory Compliance Association through speaking engagements and informational sessions. 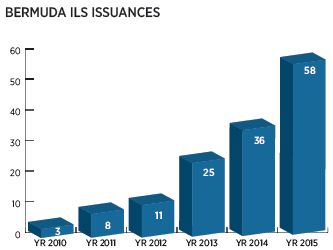 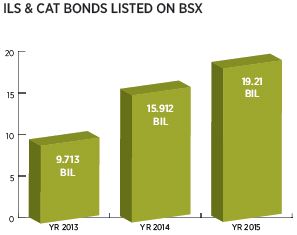 Advising Investment Managers on their Migrations to Bermuda

Conyers advised a number of investment managers based in the UK, US and Singapore with respect to their migrations to Bermuda and establishment of physical premises on the Island. This new wave of "boots on the ground" further underscores the successful efforts of the Government of Bermuda and industry in attracting global asset management players to domicile their operations in Bermuda, given its business friendly environment, vibrant infrastructure and ease of migration. The Firm has also assisted a significant number of investment managers with respect to including Bermuda entities within their management structures. MENA based investment managers have been particularly interested in the value proposition offered by Bermuda and the ease of set up.

Conyers advised a leading UK investment firm on its launch of a Bermuda investment fund innovatively aimed at eco-savvy investors. The fund follows an investment mandate of investing in carbon credits with its investment consideration being the protection, regeneration and restoration of forests, peat lands and natural habitats while generating impressive returns to investors.