by Richard Vanderplank , Mike Edwards , Tristan Head and Geoff Kermeen
Cains
To print this article, all you need is to be registered or login on Mondaq.com.

The Isle of Man is able to offer an impressive variety of options for institutional and other clients seeking to create or restructure corporate vehicles to minimize risk to, and liability of, underlying assets.

In 2004, the Isle of Man Government introduced the concept of the protected cell company ("PCC") into Isle of Man law. Just like a conventional company, a PCC has a single separate legal personality, is distinct from both its members and directors, and is subject to all the provisions of the Isle of Man Companies Acts.

Uniqueness of a PCC

A PCC differs from a conventional company in that the company is sub-divided into a number of legally distinct portions, known as the core (the non-cellular part of the company) and cells. Each cell has its own share of the PCC's overall share capital, allowing a shareholder to be the sole owner of one cell while only having small interest in the PCC as a whole.

Illustrative diagram of a PCC: 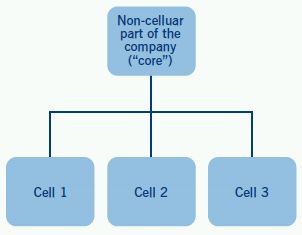 PCC under the Companies Act 2006

The recently introduced Companies Act 2006 ("the 2006 Act") provides for a new and flexible companies regime, which has updated and modernised Isle of Man corporate vehicles.

A company incorporated or regulated under the 2006 Act (which could be structured as a PCC) is able, notwithstanding any provision to the contrary included in its memorandum and articles of association, to undertake any business activity, to do, or to be subject to, any act or enter into any transaction, irrespective of corporate benefit. Such activities would, for example, include the ability to declare and pay dividends and make capital distributions, and provide financial assistance subject only to meeting a statutory solvency test.

Thus, while still protecting investors in individual cells from the liabilities and creditors of other cells, a PCC formed under the 2006 Act offers advantages of unlimited capacity and increased legal and administrative flexibility.

Liability of assets under a PCC

Pursuant to the 2006 Act, certain terms are implied into every transaction with a PCC. For example, any counterparty that seeks to make assets of a cell of the PCC liable in respect of a liability not attributable to that cell shall have an obligation to pay to the PCC an amount equivalent to the benefit received and/or hold the assets on trust for the PCC. In such an event, the amount or benefit held on trust will be used by the PCC to compensate the adversely affected cell.

A receivership mechanism exists under the 2006 Act in order to allow an "insolvent" cell to be "wound up" without the PCC as a whole entering liquidation. Thus, this would allow the PCC to carry on business notwithstanding the "insolvency" of any particular cell and without requiring the owner of the core to provide any further core or cell capital.

Cains is a leading Isle of Man law and professional services group. Its legal side is expert in advising clients in the fields of international financial services, commercial real estate structures, space and satellite, shipping and capital markets. The business acts for a broad range of clients including multi-national corporations, financial institutions, regulatory bodies and family offices. Cains also has a strong track record of working in partnership with leading law firms to effect international transactions for clients, including market listings.

Cains is the exclusive Isle of Man Member of Lex Mundi, the world's leading association of international law firms. In addition to the Isle of Man, the company has offices in London and Singapore. The Cains group have recently consolidated all their Isle of Man offices to the landmark Fort Anne Building in the Island's capital, Douglas, allowing them to offer clients an enhanced, seamless, high quality, professional service.

ARTICLE TAGS
Isle of Man Wealth Management Offshore Company Formation
POPULAR ARTICLES ON: Wealth Management from Isle of Man
Rights Of A Discretionary Beneficiary And Liabilities Of The Trustee
Walkers
The rights of a beneficiary under a discretionary trust are more difficult to identify than those of a beneficiary with a fixed interest.
Q&A With Hong Kong-based Private Wealth Expert Wisdom Hon
Ogier
Wisdom Hon leads Ogier's Private Wealth team on the ground in Hong Kong, advising international wealthy families and trust companies on estate and succession planning
Key Benefits Of Using BVI Structures
Harneys
Companies incorporated in the BVI are, by most measures, the most popular offshore holding structure in the world
Asset Management Regulations In UAE
STA Law Firm
The asset management sector within the United Arab Emirates (UAE) is responsible for sustainable growth of financial sectors ...
EU Directive 2019/1151 - Formation Of Companies And Registration Of Branches To Be Completed Fully Online
Kinanis LLC
The European Parliament and the Council of the European Union on 20 June 2019 decided to amend the existing Directive in regards to the rules and procedures on the formation of companies, registration of branches, ...
Reducing Share Capital By A Company: An Overview
Appleby
It is a fundamental principle of Bermuda company law that the share capital of a company should be maintained.
FREE News Alerts
Sign Up for our free News Alerts - All the latest articles on your chosen topics condensed into a free bi-weekly email.
Register For News Alerts
Article Tags
Isle of Man Wealth Management Offshore Company Formation
Related Articles
Foundations And Their Practical Application In The Isle Of Man Simcocks
Who Wants To Be A Billionaire?! DQ Advocates
Features Which Make Isle Of Man Foundations Attractive Asset Protection Vehicles Dixcart
Use Of A Guernsey Or Isle Of Man Family Investment Company To Hold UK Assets Dixcart
Fintech 2018 Appleby
Mondaq Webinars
Patent Filing, Prosecution, and Enforcement in India
LexOrbis
Webinar New Delhi India
Trade, Competition and Foreign Subsidies: What New EU Rules Might Mean in the Wake of Brexit
Van Bael & Bellis
Webinar Brussels Belgium
More Webinars
Mondaq Advice Centres
Global
Trademarks in SAARC Countries
Global
Investment Immigration
More MACs
Curated Content
A Different Perspective To Employer`s Liability For Anti-Competitive Behaviors: Arçelik's Application For Leniency
ELIG Gürkaynak Attorneys-at-Law
Losing The Battle, Winning The War? – Ramifications Of The Newly Introduced Settlement Mechanism Under Turkish Competition Law
ELIG Gürkaynak Attorneys-at-Law
Upcoming Events
Mondaq Social Media