by Sanjay Sanghvi , Raghav Bajaj and Ujjval Gangwal
Khaitan & Co
Your LinkedIn Connections
with the authors

Hon'ble Prime Minister (PM) Mr Narendra Modi launched a 'Transparent Taxation' platform on 13 August 2020 comprising faceless assessments, faceless appeals and a taxpayer's charter (Charter) enumerating responsibilities of the income-tax department towards taxpayers and also listing down duties of the taxpayers towards the income-tax department. The reforms are part of the Government's attempt to honour 'honest' taxpayers of the country and to make the tax system 'seamless, faceless and painless'. The Hon'ble PM, however, expressed that while there has been a decrease in complexity, tax rates, tax litigation and increase in transparency, compliance and trust; the number of taxpayers in the country is still very low in relation to the nation's population. While faceless assessments and the Charter are effective immediately, faceless appeals will be effective from 25 September 2020. In addition to this, the Central Board of Direct Taxes (CBDT) passed two separate orders on 13 August 2020 to introduce some additional measures.

Charter: Section 119A of the Income-tax Act, 1961 (IT Act) empowers the CBDT to adopt and declare a Charter and issue such orders, instructions or directions or guidelines to other income-tax authorities, as it may deem fit for the administration of the Charter. In furtherance of such powers, the Charter has been released on 13 August 2020. The Charter provides responsibilities of the income-tax department towards taxpayers and also lists duties of the taxpayers towards the income-tax department. Please see below an image of the Charter released by the CBDT: 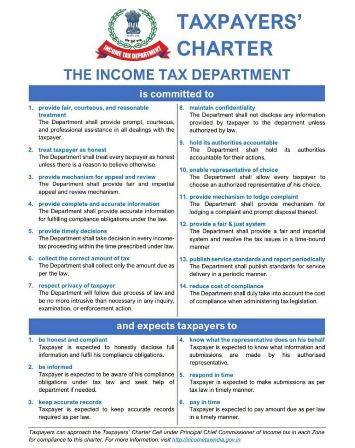 Faceless Assessments: All income-tax assessments will now be carried as per the Faceless Assessment Scheme, 2019 which was introduced by the Government earlier (please see our ERGO dated 26 September 2019 in this regard) with the following exceptions:

b) assessment orders in cases assigned to international tax charges.

This is a welcome move by the Government especially considering its intent to eliminate human interface between taxpayers and tax officers and to bring greater transparency during tax administration. Simultaneously, certain amendments have also been introduced in the Faceless Assessment Scheme, 2019 in furtherance to the above amendments. Having said so, much would depend on how effectively it is implemented at the ground level, especially because though the Charter says that the income-tax department will treat every taxpayer as honest, there are certain provisions under the IT Act which cast a heavy burden of proof on the taxpayer.

While the Charter does not lay down any material new rights for taxpayers, taxpayers will want to take recourse to their rights mentioned in the Charter in future income-tax proceedings. It would have been much better if the Charter would have also mentioned that the Government will not introduce retrospective legislation in the future.

It is worthwhile to note that under physical tax assessment, a taxpayer has a chance to explain to the satisfaction of the tax officer its business activities and how the business is being conducted. This eventually plays a very important role while framing tax assessment orders. Going forward, it will be interesting to follow how this will be carried out under the faceless assessment regime. Thus, it would be important to note that written submissions that are going to be filed under the faceless assessment regime must contain detailed explanations to tax officers' queries and be filed with utmost care.

Lastly, the Hon'ble Finance Minister in her Budget speech for financial year 2020-21 stated that one of the objectives of introducing the Charter was clear enumeration of a taxpayers' rights. Given the fact that Charter has not been expressly defined in the statute and the Charter itself makes no mention of the word 'rights', it will be interesting to see how much importance/weightage is accorded to the Charter in a judicial forum and whether the commitments given in the Charter have the force of a 'statutory right' vested on taxpayers.