by Priyanka Rastogi and Saipriya Balasubramanian
S&A Law Offices
Your LinkedIn Connections
with the authors
To print this article, all you need is to be registered or login on Mondaq.com.

The Office of Controller General of Patents, Designs and Trademarks issued the finalized Guidelines for examination of Computer Related Inventions (CRIs)1 with effect from 21st August 2015. The basic aim of the draft guidelines is to bring uniformity and consistency in the examination procedure. The said Guidelines discusses in detail about the legal provisions relating to CRIs, different terminologies used, procedure to be adopted by examiners for examination of such patent applications and jurisprudence involved in granting or rejecting patents in the field of technology. The finalized guidelines also includes illustrative example of inventions which are Patentable and which are non-patentable. The following is some important points as mentioned in the finalized guidelines.

The terms and definitions used in CRIs are summarized as follows;

The determination that the subject matter relates to one of the excluded categories requires greater skill on the part of the examiner and the following focus more on this aspect in consideration of novelty, inventive step, industrial applicability, sufficiency of disclosure and other requirements under the Patents Act and the rules made there under.

The sub-section 3(k) excludes mathematical methods or business methods or computer programme per se or algorithms from patentability. Computer programmes are often claimed in the form of algorithms as method claims with some 'means' indicating the functions of flow charts or process steps. It is wellestablished that in patentability cases, the focus should be on underlying substance of the invention not the particular form in which it is claimed. 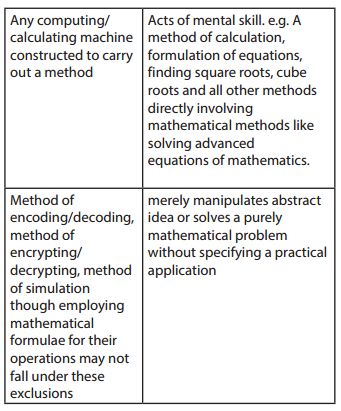 2. Claims directed at "Business Method": The claims drafted not directly as "business methods" but apparently with some unspecified means are held unpatentable. However, if the claimed subject matter specifies an apparatus and/or a technical process for carrying out the invention even partly, the claims shall be examined as a whole. Only when in substance the claims relate to "business methods", they are not considered to be a patentable subject matter.

However, mere the guidelines further states that usage of the words such as "enterprise", "business", "business rules", "supply-chain", "order", "sales", "transactions", "commerce", "payment" etc. in the claims should not lead to conclusion of a Computer Related Invention being just a "Business Method", but if the subject matter is essentially about carrying out business/ trade/ financial transaction and/or a method of selling goods through web (e.g. providing web service functionality), should be treated as business method.

3. Claims directed at algorithm: The guidelines specifies that algorithms in all forms including but not limited to, a set of rules or procedures or any sequence of steps or any method expressed by way of a finite list of defined instructions, whether for solving a problem or otherwise, and whether employing a logical, arithmetical or computational method, recursive or otherwise, are excluded from patentability.

4. Claims directed at computer Programme per se: The guidelines states that the claims which are directed towards computer programs per se are excluded from patentability like,

i. Claims directed at Computer Programmes/set of instructions/ routines and or Sub-routines written in specific language

Note: The legislative intent to attach the suffix per se to computer programme is due to the view expressed by Joint Parliamentary Committee while introducing Patents Amendments Act, 2002:"In the new proposed clause (k) the words ''per se" have been inserted. This change has been proposed because sometimes the computer programme may include certain other things, ancillary thereto or developed thereon. The intention here is not to reject them for grant of patent if they are inventions. However, the computer programmes as such are not intended to be granted patent. This amendment has been proposed to clarify the purpose."

The guidelines state that for being patentable, the subject matter should involve either;

i. A novel hardware or

ii. A novel hardware with a novel computer programme or

iii. A novel computer programme with a known hardware which goes beyond the normal interaction with such hardware and affects a change in the functionality and/or performance of the existing hardware.

A computer Program, when running on or loaded into a computer, going beyond the "normal" physical interactions between the software and the hardware on which it is run and is capable of bringing further technical effect may not be considered as exclusions under these provisions.

(i) whether the claimed technical feature has a technical contribution on a process which is carried on outside the computer;

(ii) Whether the claimed technical feature operates at the level of the architecture of the computer;

(iv) whether the claimed technical contribution results in the computer being made to operate in a new way;

(v) in case of a computer programme linked with hardware, whether the programme makes the computer a better computer in the sense of running more efficiently and effectively as a computer;

(vi) Whether the change in the hardware or the functionality of hardware amounts to technical advancement.

If answer to ANY of the above questions is in affirmative, the invention may not be considered as exclusion under section 3 (k) of the Patents Act, 1970.

Note: Certain provisions of Manual were deleted by the office of CGPDTM. Chapter 08.03.05.10 of the Manual, containing provisions pertaining to section 3(k) of the Patents Act, 1970 shall stand deleted with coming into force of these Guidelines for examination of CRIs.

EXAMPLES OF CLAIMS WHICH ARE PATENTABLE:

The draft guidelines provide some illustrative examples of some of the granted claims by Indian Patent Office:

While dealing with a patent application having title "Method for controlling a wind turbine and a wind turbine", IPAB observed that this is normally a computer operated or computer controlled technical instrumentation processing of the utilities to achieve the target in an automatic fashion and this technical process control associated with or directed to a computer set up to operate in accordance with a specified program (whether by means of hardware or software) for controlling or carrying out a technical process control such as the above, cannot be regarded as relating to a computer program per se or a set of rules of procedure like algorithms and thus are not objectionable from the point of view of patentability, more so when the claims do not claim, or contain any algorithm or its set of rules as such, but only comprise of some process steps to carry out a technical process or achieve a technical effect finally the maximum power output by controlling the wind turbine. Hence the objection that invention is not patentable under section 3(k) fails or not valid.

Examples of Claims which are not Patentable

1. A patent application was filed with the following main claim:

The above guidelines discussed various provisions relating to the patentability of computer related inventions. The guidelines further provide various examples and case laws relating to CRIs for better understanding of the issues involved from the perspective of the Patent Office. Therefore, the guidelines for the examination of patent applications in the field of CRIs by the Indian Patent Office serve as ready reckoner for the examiners so as to foster uniformity and consistency in the examination of such applications.