by Ernst & Young
Ernst & Young
To print this article, all you need is to be registered or login on Mondaq.com.

Facts of the case:

ABC Limited (the Company), which commenced operations in 2001, is a 100% holding company for four different companies operating in the healthcare sector. The Company has eight operating hospitals across India. In addition, there are two more hospitals under construction, with more than 50% work completed but on hold due to funding challenges. Four of the eight operating hospitals were acquired in the last three years. All the acquired hospitals are run by independent management with overall reporting to the central management team.

Based on the latest consolidated financial information available for the year ended June 2016, the Company had a top-line of INR7,500 million, with EBITDA of INR1,000 million and net loss of INR1,500 million. The Company had:

A term loan of INR1,200 million is due for repayment in the next 12 months. The majority of the debt is in the holding company; however, some of the debt is also in the operating entities.

Total financial debt is provided by a syndicate of six banks with the lead banker holding 37.5% and the balance divided equally among the other banks, with each holding 12.5%.

The Company has around 3,500 employees and workmen, and the employee cost has significantly increased over the last few years. Apart from the employee cost, rental cost is the other significant expense, with 7 of the 10 properties on a long-term lease.

ABC Limited has been breaching covenants for the last few quarters and has defaulted on the repayment of its quarterly instalment for the last three quarters. However, it has managed to make payments on a delayed basis to avoid NPA classification.

The promoter (holding majority shareholding) has proposed a plan with the following key points to deal with the situation: "

ABC Limited was in a difficult financial position and required a clear strategy and open communication between all the stakeholders for revival. As far as the banks are concerned, they had three options:

c) Act proactively to rescue and revive the business

To choose an option with the objective of maximization of benefit to all stakeholders, the banks had to evaluate deeper and make an independent assessment of business viability. They needed to answer the following questions:

Commissioning of IBR to assess viability

Option A was not an option as it would have only delayed the inevitable with a risk of the assets being stripped of any residual value.

To answer the questions noted above, the banks in their core committee (combining the debt of the entire Company) decided to get an independent business review (IBR) done. They expected the IBR to help in assessing the viability of the business and validating the promoter's assertions. In four weeks, the banks received an IBR report. Some of the key facts included in the report were as follows.

(i) On an as is basis, EBITDA from business would only be able to service part of the interest in the next 12–18 months and no principal payment would be possible. Principal repayment could only start after 18 months.

(ii) All the four greenfield hospitals had optimal utilization levels and were cash flow positive; however, margins had been either flat or declining in the last 3 years.

(iii) From the four operating hospitals acquired by the group, two would be free cash flow positive only in 2019 and the other two in 2022.

(iv) The report identified a list of non-core assets, which could be liquidated to realize cash of up to INR500 million. Also, there were assets worth INR500 million that were not yet pledged against any loan and could be provided as additional security against a loan.

(v) There was a benchmarking study done with other hospitals in the same geography and the report identified a few measures to save annual costs in the range of INR200 million to INR300 million. The report also provided details of the potential of consolidating some functions such as finance, procurement and HR into a single unit for all the hospitals.

(vi) The report indicated the potential of improving the working capital cycle by 10 days.

(vii) The expected capex to complete the under-construction hospital was approximately INR1, 000 million. 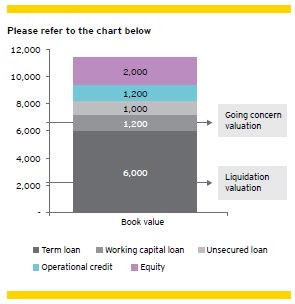 What did the banks do?

Based on the IBR report, the bankers concluded that the business was viable and they wanted to support it. Else, they ran the risk of taking the Company into liquidation, which would result in significant loss of value to all class of creditors. Further, a delayed liquidation would result in further deterioration of value.

However, the banks also recognized the need for operational and financial restructuring along with close monitoring and, therefore, all the stakeholders should cooperate in the turnaround strategy to minimize their losses.

(iii) A part of the debt (INR 1,000 million) be converted to a long-term instrument carrying a nominal rate of interest with repayment being made over 5 years starting in 2021.

The resolution plan was discussed with all the key stakeholders – banks, promoters and potential investors. Based on the comments received, the plan was modified and an in-principle agreement was reached.

Code vs outside the Code

Under the current circumstances, the banks decided to invoke the Code to get an approval on the resolution plan. The following benefits could be realized upon invoking the Code.

In summary, the banks could help revive the Company because of the following:

ARTICLE TAGS
India Insolvency/Bankruptcy/Re-structuring Insolvency/Bankruptcy
POPULAR ARTICLES ON: Insolvency/Bankruptcy/Re-structuring from India
Insolvency Proceedings Against Personal Guarantors Under The Insolvency And Bankruptcy Code, 2016- A Missed Opportunity?
IndusLaw
After a lapse of almost 3 years, the MCA finally issued a notification dated November 15, 2019 that renders insolvency and bankruptcy proceedings against personal guarantors to be governed by the Insolvency and Bankruptcy Code, 2016.
Insolvency And Bankruptcy Code: Quarterly Review Of Significant Judgments
Phoenix Legal
The judiciary has rendered numerous path-breaking decisions to complement various amendments to the Insolvency and Bankruptcy Code, 2016
Avoidable Transactions Under The Insolvency And Bankruptcy Code: Key Considerations
S&R Associates
For the success of any insolvency regime, it is critical that distressed companies are prevented from takings measures which could hamper recovery to creditors in the event insolvency proceedings were to commence.
Can A Decree Holder Approach The National Company Law Tribunal For Execution Of A Decree? A Discussion In Light Of The Recent Judgement By Nclat
Singh & Associates
In the last few years, it has been noticed that the homebuyers struggle to get their decree executed as the orders of the Real Estate Regulatory Authority ("RERA") have not been executed.
Swiss Ribbons v. Union Of India – The Foundation For Modern Bankruptcy Law
Cyril Amarchand Mangaldas
The Supreme Court's decision in Swiss Ribbons v. Union of India upholding the constitutionality of the provisions of the Insolvency and Bankruptcy Code, 2016 (IBC or the Code) is a landmark in the development of the Code.
Personal Guarantors Now Subject To IBC: A Brief Overview Of The Insolvency Resolution Process
Dhaval Vussonji & Associates
By a notification dated 15th November 2019, the Central Government has from the 1st of December, 2019 brought into effect Part III of the Insolvency and Bankruptcy Code, 2016 (save and except provisions dealing with ...
FREE News Alerts
Sign Up for our free News Alerts - All the latest articles on your chosen topics condensed into a free bi-weekly email.
Register For News Alerts
Article Tags
India Insolvency/Bankruptcy/Re-structuring Insolvency/Bankruptcy
Related Articles
Withdrawal Of A Resolution Plan: Not A Recourse Available To A Successful Resolution Applicant Under The Ambit Of IBC Phoenix Legal
One Time Restructuring Framework For Stressed Borrowers IndusLaw
NCLAT Affirms Admission Of Insolvency Petition Against The Corporate Guarantor Of A Sole Proprietorship Firm VGC Law Firm
Restructuring & Insolvency Monthly Newsletter - October 2020 HSA Advocates
Can Ex-Employee Of Financial Creditor Be Interim Resolution Professional? S.S. Rana & Co. Advocates
Mondaq Webinars
Global Investigations During the Covid 19 Pandemic
The Law Offices of Panag & Babu
Webinar New Delhi India
Patent Filing, Prosecution, and Enforcement in India
LexOrbis
Webinar New Delhi India
More Webinars
Comparative Guides
Alternative Investment Funds
Blockchain
Cartels
Cybersecurity
Enforcement of Foreign Judgments
Mondaq Advice Centres
India
Insolvency
India
Trademarks
India
Arbitration, Litigation and Conciliation
Global
Investment Immigration
Global
Trademarks in SAARC Countries
More MACs
Curated Content
A Different Perspective To Employer`s Liability For Anti-Competitive Behaviors: Arçelik's Application For Leniency
ELIG Gürkaynak Attorneys-at-Law
Losing The Battle, Winning The War? – Ramifications Of The Newly Introduced Settlement Mechanism Under Turkish Competition Law
ELIG Gürkaynak Attorneys-at-Law
Upcoming Events
Mondaq Social Media