Blockchain is a tamper-proof electronic ledger. Think of it the same way as you would an accounting ledger book, a cash book, a land title register or a medical health file. The key difference between them is that records in a typical accounting book or land title register can be manipulated, but not on the blockchain. 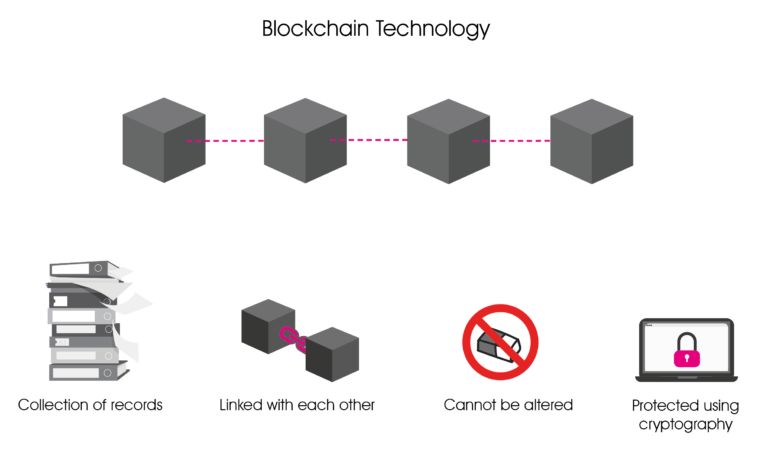 Removing this intermediary, blockchain mitigates the risk of fraud and corruption and makes transactions frictionless, fast and cost-effective. Blockchain helps you do away with intermediaries such as escrow agents, share custodians, health-record companies and money transmitters – anyone who brokers a transaction and charges a fee merely because they introduce an element of trust in the system. Take the example of money transmitters who help Indian workers in Dubai to remit money to their families in Kerala. In 2018, India received over USD 83 billion in inward remittances. The estimated cost of these was USD 4.1 billion. Remittance through blockchain would have cut out the intermediaries, reducing this cost by 60% translating to saving of INR 18,000 crore per year.

How does blockchain work?

Blockchain technology connects millions of computers (much like the internet) that can all store/host encrypted copies of these records. So instead of one record keeper, you have millions of record keepers called 'nodes'. One record keeper can tamper records, collude with third parties and commit fraud, but now there are a million nodes who are keeping a watch on each other.

Are cryptocurrencies different from blockchain?

What do cryptocurrencies do?

Think of blockchain as record-keeping infrastructure of millions of interconnected user-nodes. These user-nodes build and maintain this record-keeping infrastructure and also use it for their own record keeping. The technology is designed in a way that users need "ink" to write their records. When the users build and maintain the infrastructure, they collect ink as fee from other users. And then the users use the ink themselves to write. This makes the blockchain ecosystem self-sustaining without depending on any government or organisation owning, building and maintaining it.

And what are they not? Cryptocurrencies should not be seen as a currency. The name cryptocurrency is a misnomer. They do not serve as an alternative to the Rupee or other fiat currency. They really are an asset/software that is used to write on the blockchain and for incentivising the nodes – if at all they serve as an instrument for payments, this use case is limited to within the blockchain ecosystem to incentivise the nodes.

Why can't you just pay the nodes dollars for their services? Why incentivise the nodes with cryptocurrencies?

Much like the internet, the blockchain infrastructure runs across the globe with millions of nodes writing billions of new records every second. These nodes are paid fractions of a dollar for every micro-transaction. It is impossible to use the existing fiat money infrastructure to make real-time, micro-payments to millions of nodes across the world. Fiat money payments have to pass through intermediaries such as banks, money changers, card networks etc., and are subject to friction, delays, exchange rate fluctuations, transfer charges, and other cost inefficiencies.

What are the government's concerns around use of cryptocurrencies?

The government is concerned about 1. the use of cryptocurrencies for illicit activities – tax evasion, money laundering, terrorism financing; and 2. loss of control over monetary policy and flight of capital overseas.

Are the government's concerns valid?

Yes. However, all new technologies pose risks. The question is whether these risks can be mitigated and managed to a reasonable extent such that the benefits of the technology outweigh the risk. There were concerns around the use of the printing press (jobs), automobiles and aeroplanes (safety), internet (surveillance-free communication) as well, as with many new technologies such as artificial intelligence, drones and robotics. A ban is usually not a good answer to regulating new technologies.

How can the risks imposed by cryptocurrencies be mitigated and managed?

Regulation can solve for this concern. Across the world, regulators (including in the US, Singapore, Japan, Dubai and UK) have evolved regulation to solve for this issue. Licensed intermediaries (crypto-exchanges) can help the regulator maintain oversight and control over cryptocurrency transactions through mandatory requirements such as extensive know-your-customer or KYC checks on traders, taking anti-money laundering measures and maintaining transaction records. This is how existing financial institutions such as banks and stock exchanges keep track of financial transactions and verify customer identity. A dashboard can be made accessible to all relevant authorities to provide real-time trading data in relation to all exchange users in India; and trade of cryptocurrencies can be restricted to only those users whose addresses have been whitelisted by licensed exchanges in India. These features can provide substantial controls to the regulator to monitor flows of cryptocurrencies and restrict them to verified/legitimate users. We also propose adoption of Aadhar-based e-KYC, mandatory capitalization requirements, creation of a central repository with details of blacklisted users and formation of an investor protection and education fund.

What will be the effects of a ban on cryptocurrencies?

A ban will deprive India, its entrepreneurs and citizens of a transformative technology – as foundational as the internet itself – that is being rapidly adopted across the world, including by some of the largest enterprises such as Tesla and Mastercard. It will overnight erase enormous amounts of wealth held in cryptocurrencies by over fifty lakh Indians and deprive them of one of the greatest wealth-creation opportunities of the next decade.

Banning cryptocurrency, and not regulating it, will likely create a parallel economy where its illegitimate uses (such as for illicit trade or money laundering) will increase and legitimate uses will be abolished.  This is what happened when the RBI imposed a banking ban on crypto-businesses in 2018- the largest crypto-startups in the country shut down. And all trade in cryptocurrencies moved away from responsible and sophisticated crypto-exchanges that followed safeguards such as extensive know-your-customer or KYC checks on traders, anti-money laundering measures and maintaining transaction records. Instead, over-the-counter platforms sprung up on Telegram channels that deal in cash and maintain no records.

This bill provides for building a digital currency issued by the RBI. Let's start with that?

Issuing a digital official currency is a good idea for India. However, issuing a digital official currency but excluding other 'private cryptocurrencies' is not a good idea. It is like saying in 1993 that the government is concerned about the use of the internet by terrorists to send emails, and will build its own email service. We would have had to live with a singular email application and would not have benefitted from multiple email products such as Yahoo mail, Hotmail, Rediffmail, and Gmail. This would have also prevented the creation of various internet-based applications such as social media (Facebook), chat services (WhatsApp), video steaming (Netflix) and e-commerce platforms (Flipkart) that were built privately on top of the internet. Also, India would have cut herself off from the global digital infrastructure for e-mail communication. If the existing 1500 cryptocurrencies are the various applications of the internet, then an RBI-backed cryptocurrency will be akin to a local area network or a home wifi – limited in its potential and not inter-operable with other applications being built, and not allowing other developers to innovate on top of it. It is risky to reduce the potential of all cryptocurrency applications to their use as currency; much like it would have been to reduce the internet down to email.

Further building an RBI-issued digital currency will be a multi-year project. To create a digital currency, tender it out, pilot it and eventually build it out on a pan-India level will leave us years behind the rest of the world. A few other countries that have declared their intention of building out centrally backed cryptocurrencies are merely evaluating these decisions from a policy standpoint or running pilots. For example, China has been running pilots since 2017. We should look at our official currency project as independent of so-called "private cryptocurrencies."

Some state governments have already implemented blockchain based projects that do not require cryptocurrencies. Then why do we need cryptocurrency?

As discussed above, these projects are akin to building a local area network or a home wifi, and not the internet. Such localised projects can and should co-exist with other private innovation. Further, such projects, whether it is the 'digital Rupee' or state-run land records management, will require the government to build the entire infrastructure at its own cost. When these projects use an existing privately-built cryptocurrency network, the infrastructure is already built and can be used on a pay per use model. It is relatively easy to replace the infrastructure and move to a better service. Should such government services be operated on privately operated infrastructure? Yes, many government applications operate on the open internet. Additionally, the true potential of this technology is realised when it is used in a decentralised fashion. When centralised (i.e., when it is run by the government or an organisation on its own infrastructure), the records are only as safe as the central server is. A decentralised project on the other hand does not have a single point of attack and is considered highly secure.

What is the intrinsic value of cryptocurrencies? They work purely on demand and supply. Given its volatility, isn't it an extremely unsafe class of financial assets, and open to manipulation?

Cryptocurrencies have an inherent utility as a technology. People also buy them to use them as a monetary asset, and demand and supply determine their value. Now this is similar to buying land – you can buy land to use it (build a house etc) or invest in it. Likewise, people invest in cryptocurrencies. These investments are used by cryptocurrency developers to fund further development of their projects. Given the tremendous potential of this technology, investments here will reap high returns. Taking a note of this companies such as Tesla are investing their treasury reserves in to bitcoin.

Interestingly, cryptocurrencies have delivered the highest returns on investments in a ten-year period than any other asset class in a lifetime. This is also to say that a critical mass of investors believe in the potential of the underlying technology.

Yes, cryptocurrencies can be volatile and open to speculative trades. There have been reports of frauds and market manipulation. However, such activity can be regulated through licensed intermediaries. For instance, certain countries only allow sophisticated investors (having a threshold net worth) to invest in cryptocurrencies.

Yes, some cryptocurrencies such as bitcoins requires a high amount of energy. However, advancements in technology are beginning to address this concern. A commonly used technique for cryptocurrency mining, called 'proof of work' or PoW validation, is an energy inefficient technique. Instead, a highly energy efficient technology called 'proof of stake' or PoS is increasingly being used. Ethereum, the world's second-largest cryptocurrency, 1 is currently transitioning from a PoW to a PoS validation model. 2

Further, access to cheap electricity is important for miners, as they won't have any incentive to continue mining if its cost exceeds the profit earned by them through selling bitcoins. Consequently, many cryptocurrency miners use renewable-energy based electricity, as it is generally cheaper than coal-produced electricity. For example, a study by Cambridge University found that over 39% of the total energy consumed by cryptocurrencies including Bitcoin, Ethereum, Bitcoin Cash and others comes from renewable energy sources. 3 Cryptocurrency mining in Iceland runs almost completely on renewable energy. 4 This helps to reduce the harmful environment impact of cryptocurrency mining.