by Lefteris Androkli
Premioserve
Your LinkedIn Connections
with the authors

For many businesses, their IPs is the main profit driver. This is more prominent in the digital era and economy in nowadays. The IP is amongst the main reasons why some businesses differentiate from the competition or why some products/services are sold at a higher price. IP comes into different forms such as patents, licenses, software and other non-obvious legally protected IPs.

Tax considerations are important for business and Multinational Enterprises (MNEs) as a tax efficient structure would increase after tax profits and value for shareholders. Non – tax considerations such as IP protection, expertise on Research and Development (R&D), costs etc. are also important and are taken into account in the decision-making process.

Traditional tax royalty models involve an IP owner company and IP users (related companies) located in different jurisdictions where IP owner grants a license to the IP users to exploit the IP as a return for a royalty. The IP owner is usually located in a non-tax/low tax jurisdiction and the IP users in a high tax jurisdiction where these royalties are tax deductible and with low or zero withholding tax (based on a double tax treaty or EU Interest/Royalty Directive) for royalty payments to the IP owner.

These traditional models have been under scrutiny by OECD BEPS project (Actions 8 to 10) and based on the 2017 OECD Transfer Pricing (TP) Guidelines. These initiatives and guidance have a goal to align/allocate   profits created with the value created by the parties involved. Especially for intangibles the profit allocation should be done based on the Development – Enhancement – Maintenance – Protection – Exploitation (DEMPE) functions undertaken, risks assumed, and assets used by the parties (group entities).

Cyprus has an attractive IP tax regime (key characteristics are described below), that enables MNEs to structure their operations in an efficient and effective manner incorporating OECD BEPS and TP Guidelines into their structures. This can be achieved using the so called "principal" entity model where a centralized Cyprus entity (the Principal entity) exist and undertakes most of the high value generation activities of the group. As a result, this entity is entitled to most of the group profit generated. Taking into advantage the up to 80% deduction on qualifying profits from exploitation of intangibles, as per CY IP Box regime, the effective tax rate of the group is significantly reduced.

Below is an example of a principal entity structure for a Group that deals with the development and sale of IP such as a computer software. The Cy based company will be entitled to the most of the profits of the group given that is the principal entity carrying most of the DEMPE activities and R&D activity is performed either by its own employees, third parties or by a foreign branch. The related limited risk non cy companies are earning a low margin on services offered.  Intra group pricing needs to be supported by a transfer pricing study and value chain analysis. 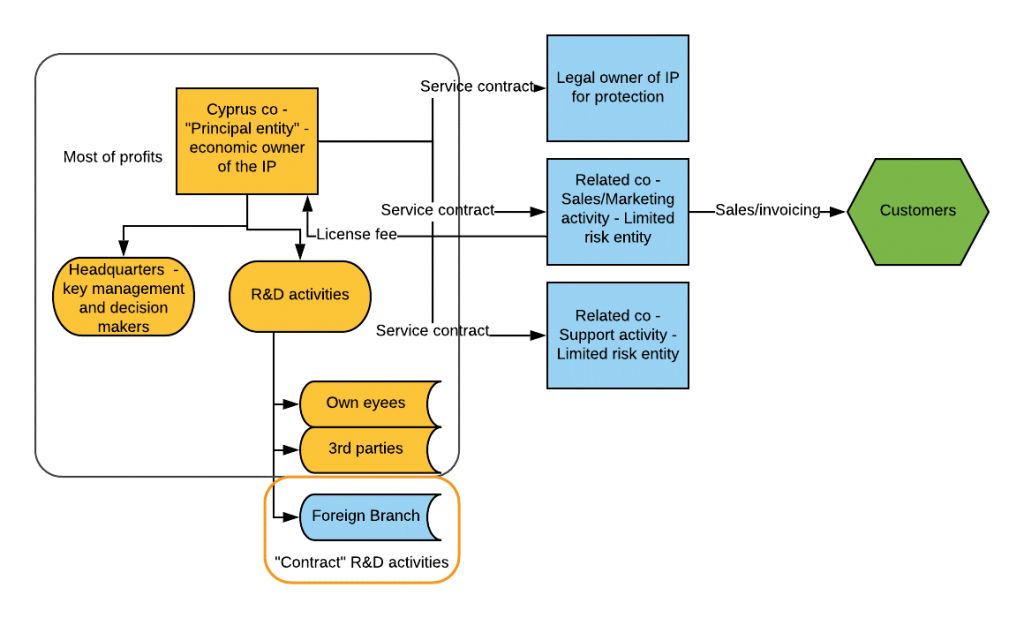 Further to the IP tax regime, Cyprus has several tax incentives for expatriates to relocate in Cyprus (such as lower tax rates, tax exemptions etc.) that their main purpose is to give motives to MNEs and individuals to relocate their key personnel to Cyprus.

The Cyprus IP tax regime at a glance:

The current law enacted as from 1 July 2016 and is fully compliant with the provisions of Article 5 of the OECD BEPS project following the " Modified Nexus Approach" which this approach only allows to taxpayer to benefit from an IP regime to the extent that it can show that it itself incurred expenditures, such as R&D, which gave rise to the IP income.

Under Cyprus IP regime, an allowance (in the form of notional expense deduction) is given on qualifying profit resulted from a qualifying IP. The allowance can be up to 80% of the qualifying IP profit.

The key characteristics of the regime are as follows: 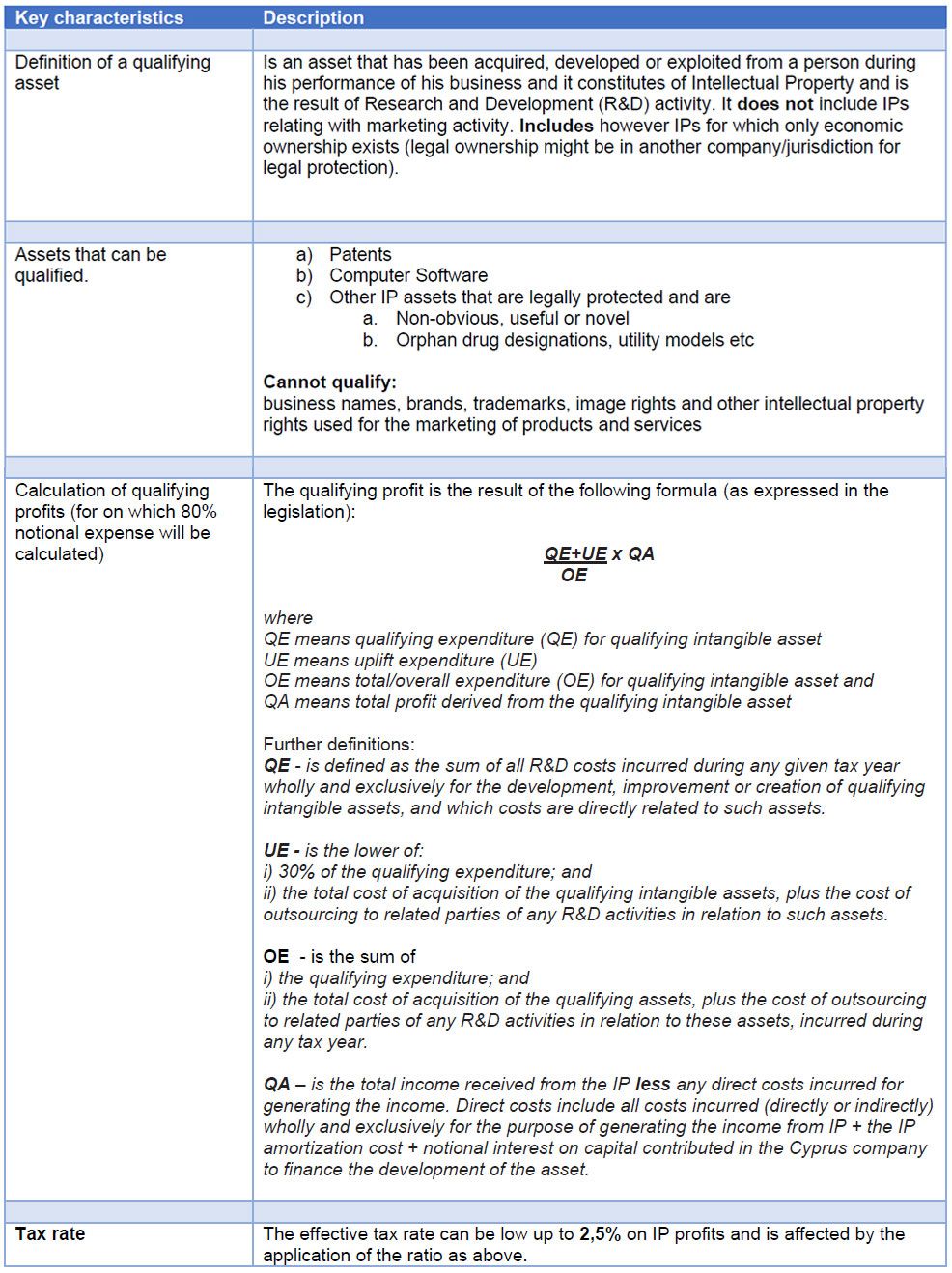