by Charalambos Meivatzis , Andri Michael and Elena Andreou
Kinanis LLC
Your LinkedIn Connections
with the authors

Cyprus is dynamically positioning itself as one of the top emerging investment fund centres in Europe. The fully upgraded and modernised legislative and regulatory framework, which is in full compliance with the European legislation, has enhanced competiveness and has placed the country in the league of important jurisdictions for the Alternative Investment Funds industry.

The Government, the Regulator and the Professionals have firmly committed in providing their full support in developing further the Funds industry in Cyprus and there is strong belief that this joint effort will create even more positive results.

B. WHO CAN BENEFIT FROM THE SET UP OF A FUND 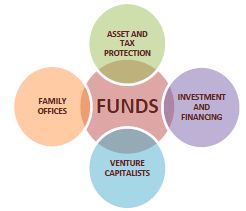 Conducting business through a fund, a vehicle which operates under more strict and transparent rules than normal limited liability companies, gives the ability to raise capital from private and institutional investors who are not really interested in being involved in the day to day management of their investment but seek a good return on their investment in accordance with the risk they chose to undertake.

Funds are traditionally being used as an alternative method to bank financing and are used to finance real estate, shipping and other large scale investments. It is also one of the most widely used vehicle from Venture Capitalists whose investments may need extra funding.

The way investment funds operate provide a clear separation between ownership and the management and control of the underlying investments. This is due to the fact that the management is not performed by the owners (unitholders) but by fund managers who are subject to specific rules and supervision. This makes it appropriate for High Net Worth Individuals seeking to achieve asset protection and tax optimisation by replacing their traditional holding companies with a more sophisticated and professionally managed and regulated vehicle, as well as Family Offices who want to manage the family wealth in a more flexible and transparent way with specific risk and investment characteristics.

C. WHY SET UP A FUND IN CYPRUS

Cyprus being an EU Member State has a lot to offer in the financial services sector and the Funds industry in particular. With its efficient and up-to date regulation, which is fully harmonised with the related EU Directives, provides a framework in which Fund Managers and Funds can operate efficiently.

Further, Cyprus is an already established International Business Center with years of experience in servicing international clients. The skills and knowhow obtained from the experienced lawyers and accountants is now put at work in servicing the Funds industry in a cost effective manner, keeping the set-up and ongoing operational costs well below other established EU Fund jurisdictions, without compromising the quality of the services offered.

The island's strategic geographic location allows Cyprus to act as a footbridge between Europe and the emerging Middle East and African markets as well as the attractive Asian economies.

Finally, Cyprus enjoys one of the most attractive taxation systems which is fully compliant with EU and OECD requirements. Funds set up in Cyprus will have access to a wide network of double taxation treaties and will be benefited from low tax burdens levied on Cyprus based entities. In addition, specific incentives exist for fund managers and high-earning employees making the relocation of such persons very attractive from a taxation perspective.

The Cyprus Securities and Exchange Commission (CySEC) is the regulatory authority, responsible under the AIF Law for the licensing and supervision of Alternative Investment Funds in Cyprus.

The application for the granting of authorisation for an AIF must be accompanied by the following data:

CySEC shall inform the external manager of the AIF or the AIF directly, if internally managed, within 6 months of the submission of a complete application file as described above.

An AIF may be established and operate as open-ended or close ended fund and take the following legal forms:

An AIF may operate as an Umbrella Fund structure, with more than one investment compartments (sub-funds).

According to the AIF Legislation, the Umbrella Fund and the Sub-Funds constitute a SINGLE legal entity but each Sub-Fund is: 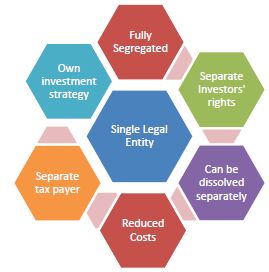 AIFs may be either internally or externally managed.

An AIF which is internally managed, may take the form of an Investment Company or a Limited Partnership with separate legal personality1.

An externally managed AIF may take any legal form and can be managed by:

The assets of the AIF shall be entrusted to a depositary which has its registered office in Cyprus, an EU member state or a third country.

The eligible depositaries for an AIF include Credit Institutions, Investment Firms or an institution under prudential regulation and supervision, and recognised by the Member State as eligible to be appointed as depositaries.

The depositary of an AIF is responsible for:

Under certain conditions, the depositary may delegate the duty of safekeeping the AIF's assets to third parties.

The duties of the depositary and the external manager or the AIF in case it is internally managed, must be performed independently and exclusively in the interest of the unitholders of the AIF.

The directives issued by CySEC set the restrictions and investments limits that apply to an AIF's investment strategy. These relate to:

The primary goal of the restrictions and investment limits is to ensure liquidity and promote a well-diversified investment portfolio.

A Cyprus registered AIF can be addressed to professional and well-informed investors. It may also market its units to retail investors, however, certain conditions and prior approval from CySEC must be obtained.

7. Limitation on Number of Investors

A Cyprus AIF has no restriction as to the number of investors provided that the legal form of the AIF allows it.

In the case of an externally managed AIF there are no initial capital requirements, as such requirements are imposed on the manager.

For internally-managed AIFs that fall below the AIFMD thresholds, the minimum capital requirements are set to €125.000, which must be available at any time in the form of cash which is deposited in the name of the AIFLNP in an approved credit institution in an EU member state or in the form of assets readily convertible to cash.

For internally-managed AIFs that fall within the conditions of the AIFMD the minimum capital requirement is set at €300.000.

9. Value of Assets under Management

An AIF must hold assets of at least €500.000 for each investment compartment within 12 months from the date of registration, through the means of capital raising from investors

CySEC may extend the 12 month period for up to additional 12 months, if this is considered as necessary.

Any capital commitments for the acquisition of units as well as the amount of minimum initial capital as identified in section 9 above, are not taken into account for the calculation of the AIF assets under management.

Cyprus based funds and their investors can benefit from a favourable tax environment. An AIF will be subject to Corporation tax at 12.5% on the resulting net profits without any imposition of taxes on the net assets of the Fund. 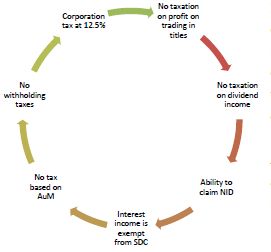 It must be noted however that dividend income as well as any profit generated from the trading of titles – such as shares, units of funds, bonds, options etc, are exempt from taxation in Cyprus.

Any interest income received from an AIF is considered as "active" income and is exempt from Special Defence Contribution Tax. This means that interest income is taxed as normal business income at 12.5% on any resulting net profits.

Further, the amount of capital raised from investors (unitholders) may be eligible to receive a Notional Interest Deduction (NID) as per the provisions of the Cyprus Tax Legislation which can potentially reduce the taxable base of a company type AIF by up to 80%.

There are no withholding taxes on dividend payment to foreign investors irrespective of the percentage of the participation in the Fund and no taxation applied on the redemption of units of an AIF.

F. FUNDS AT A GLANCE 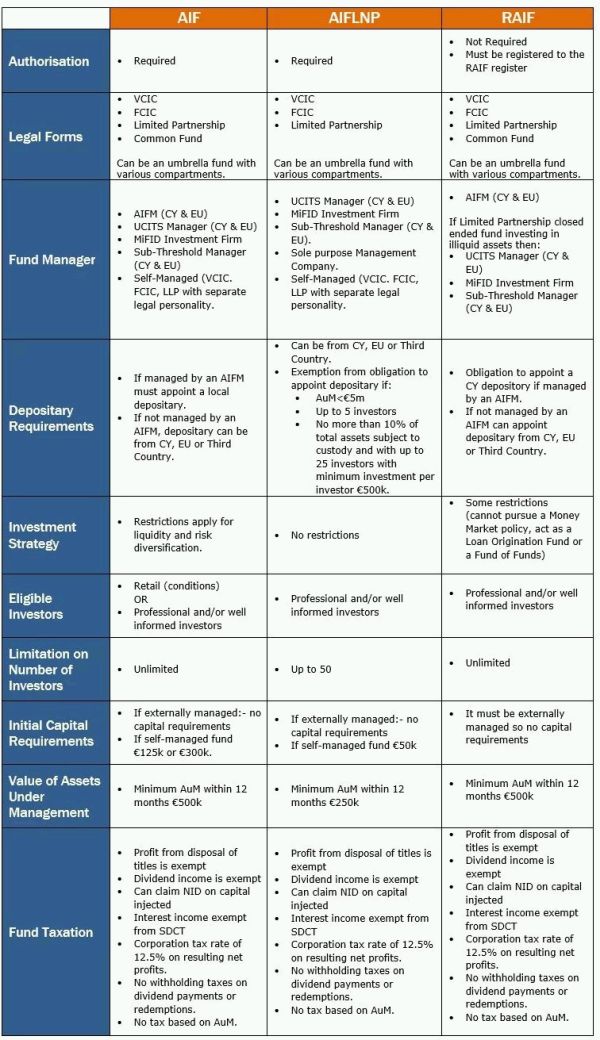 G. THE FUTURE OF FUNDS IN CYPRUS

The transformation of the investment funds regime in Cyprus in combination with the island's strategic geographic position, attractive tax environment and the experienced professional service sector has made Cyprus the rising star of the EU funds jurisdictions.

As the value of assets under fund management in Europe is increasing with a consistent growth rate, Cyprus with steady and important steps to the right direction, will play a significant role in the future of the global funds industry.