by Bernard Kwasniewski and Mitchell T. Dost
Torys LLP
Your LinkedIn Connections
with the authors 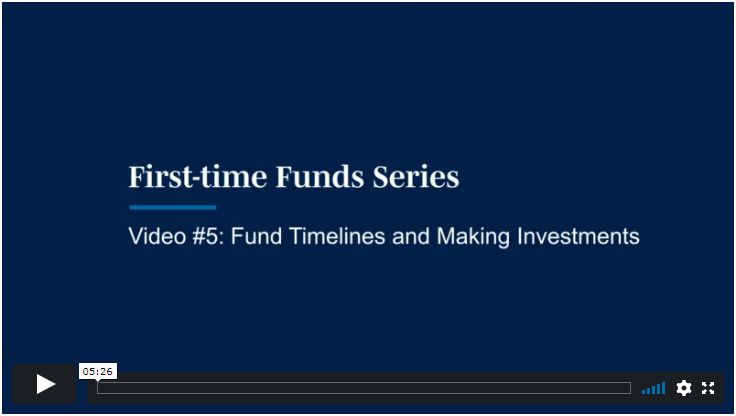 In the fifth video of our first-time funds series, Bernard Kwasniewski and Mitchell Dost of our Private Equity practice explore fund timelines and making investments.

They discuss key considerations, including:

Play the video above to watch the informal discussion and stay tuned for the next episode of our first-time funds series on sponsor-side housekeeping.

Mitchell Dost (00:26):  Thanks, Bernard, and thanks everyone for tuning in. I'm an Associate in the Funds Private Equity Group and as Bernard mentioned, today we'll be discussing fund timelines. Now, Bernard, I've often thought that one can break down the lifeline of a fund into four main areas: formation, investing, harvesting and eventually dissolution. Do you think that's an appropriate way of thinking about the life of a fund?

Bernard Kwasniewski (00:48): Mitchell I think that is a great way of summarizing it. But obviously at each stage there's a lot going on, on both the fund side and on the investor side. Focusing on the first stage of formation at the outset of this stage, the fund itself hasn't been legally formed. Rather, this is the time when the fund's investment strategy is developed, and the fund can focus on marketing the investment opportunity, often using a private-placement memorandum or an offering memo. These are both marketing documents that summarize the investment opportunity.

Mitchell Dost (01:27): And this is also the time when negotiating with initial investors takes place both on the limited partnership agreement and on the side letters—which Colby and Mark mentioned in the prior video—are much more common when dealing with institutional or strategic investors, and less so with friends and family funds. Once all these legal documents are finalized and eventually executed, that's when the initial closing can occur and the fund's life or term can really begin.

Bernard Kwasniewski (01:53):  That's right. A typical closed-end fund has a term of around 10 years. This can be longer or shorter depending on the investment strategy of the fund. That term can be extended if the limited partnership agreement provides for that, either by the general partner unilaterally, or with the consent of the limited partners.

Mitchell Dost (02:14): And while traditionally a fund's timeline has been approximately 10 years in length, recently there's been a shift to more longer-term vehicles. We started to see that closed-end funds have a timeline of somewhere around 11 to 15 years, and with evergreen or open-ended funds being utilized for more illiquid assets that have a relatively stable value.

Bernard Kwasniewski (02:38):  That's right. In an evergreen fund, new investors are permitted to come into the fund on a rolling basis so throughout the life of the fund, the fund can hold closings. In a more standard closed-end fund, it's also common for the fund to be able to bring investors in after the initial closing, but only during the fundraising period, which in a standard closed-end fund is anywhere from 12 to 18 months from the initial closing. The fund is ready to begin the second stage after it's held its first close and that's the investment period. So the investment period is typically 5 to 6 years following the initial close. During this period, the fund sponsor is sourcing, evaluating, negotiating, and ultimately—if they have found a good investment—closing fund investments to build the fund's portfolio. The time from the initial investment's exit can be as little as a few months to many years. It depends on the nature of the investments and the strategy of the fund.

Bernard Kwasniewski (04:38):  Yeah, those are interesting developments that we're seeing recently. So following the harvest period, the fund enters its final period: dissolution. During this time, the fund will be legally dissolved and the fund sponsor will usually liquidate investments during the entire life of the fund. But at dissolution, whatever is remaining will be sold. All the proceeds are distributed to investors and the fund sponsor in accordance with the terms of the distribution waterfall.

Mitchell Dost (05:10):  Thanks, Bernard. And thanks for tuning in to this installment of our first-time funds discussion. You can hear all of our Private Equity insights at www.torys.com. Thanks.