Australia: Westpac: The Issues, Regulators And Lessons To Be Learnt

Since the Royal Commission was established to inquire and report on misconduct in the banking, superannuation and financial services industry in Australia (on December 2017 )1, it has been revealed that several banks have been involved in fraudulent and criminal conduct, one of them being Westpac Banking Corporation.

One of the more egregious acts of misconduct, according to the Royal Commission, was Westpac filling out loan forms and documents on behalf of its clients. Westpac was quick to acknowledge that it was normal practice for staff to help clients fill out documents on their behalf. However, after further investigation, there was evidence to suggest that the bank falsely witnessed documents and marked documents without client approval and acknowledgement2.

The case of Ms. Flanagan

A specific case for this issue was that of an elderly pensioner, Ms. Carolyn Flanagan. Ms. Flanagan became a guarantor for a business loan taken out by her daughter. Westpac, despite having knowledge of Ms. Flanagan's numerous medical conditions such as being legally blind, deafness, depression and a previous battle with cancer, allowed her to become a guarantor of AUD 165,000 business loan while claiming her home as collateral. Unfortunately, her daughter's business failed two years after the loan was taken out in 2010. Westpac sought to evict the pensioner to recoup funds, but allowed Ms. Flanagan to live in her home until her passing. However, if she decided to sell the property, even for the purpose of funding her aged care and medical bills, she would have been liable to pay AUD 170,000 from the sale, plus three per cent per annum accruing.

Westpac's general manager has admitted that the bank had incorrectly filled out Ms. Flanagan's daughter's loan. The marked document suggested that Ms. Flanagan sought independent legal and financial advice regarding the business loan, when in fact, she had not. Westpac admits its staff had wrongly assumed that Ms. Flanagan would be seeing a lawyer after the meeting. The bank lacked due diligence in checking for the elderly's sources of income, placing the loan at greater risk. Furthermore, a Westpac employee admitted to signing the loan documents as a witness even before Ms. Flanagan signed the document.

After the scandal was released, Westpac Group's CEO Brian Hartzer released a public apology and a guarantee that the bank will learn from its mistakes3. The introduction of low rate credit cards, lower transaction fees, amendment of remuneration structures and other initiatives are some of the measures taken by Westpac to remedy its misconduct4.

Despite the 25 per cent cut of short-term cash awards to executives, shareholders still showed concern of executives receiving large amounts of bonuses following the scandals revealed by the Royal Commission. Westpac Chairman Mr. Lindsay Maxsted pointed out that such misconduct was not limited only to Westpac, and he continued to defend via the decrease in short-term awards for executives. He further urged shareholders not to focus on the issues released by the Commission as this does not reflect the overall culture of the company8. Westpac has allotted AUD 281 million for customer compensation and litigation costs910. After the no-confidence vote on the company's remuneration report, Mr. Maxsted said that the bank will be reviewing the remuneration structure and taking shareholder feedback very seriously11.

CGLytics' Pay for Performance analysis (using its Pay for Performance modeling application) shown below, has compared Westpac's CEO total realized pay with the industry peer group's three-year Total Shareholder Return (TSR). The CEO's pay is in the 45th percentile compared to the three-year TSR being ranked in the 20th percentile which shows that the CEO's pay is aligned to the TSR performance following the 25 per cent decrease in short-term cash awards. 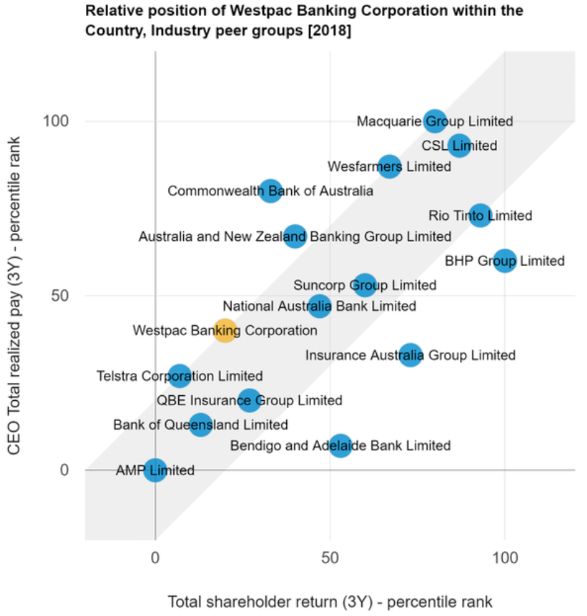 After the 2018 AGM, the Australian Regulation Prudential Authority (APRA) requested that Westpac undergo an assessment of its culture, governance and accountability (CGA)12. The bank's CGA self-assessment report stated that the company needs improvement of understanding non-financial risks. Westpac admitted that the bank's management of non-financial risks was "generally less mature" than its management of financial risks13. The bank's recommendations are focused around five streams, namely: governance, risk and compliance, customers, remuneration and accountability and culture. The CGA report was released in the hopes of avoiding a second strike during the 2019 AGM.

Towards the end of November 2019, Austrac, an Australian Government regulator for financial crimes, discussed legal actions against Westpac following an estimated AUD 23 million legal breaches worth over AUD 11 billion14. Among these breaches, the most detrimental is the one regarding transactions involved in child exploitation in the Philippines.

Westpac was accused of not conducting due diligence despite having knowledge of the aforementioned practices. Only 18 months after the transactions had occurred did Westpac take any action.

Westpac responds to scandal with changes to their board

After the release of this new scandal, shareholders of Westpac have been aggressive in wanting to terminate CEO Brian Hartzer16. However, the Board of Directors have expressed that there is no evidence that Mr. Hartzer was aware of these criminal transactions. As a result, Westpac again promised to cut down bonuses of its senior executives and promised to create a financial crime committee17. Despite these efforts, pressure and criticism from shareholders pushed CEO Mr. Brian Hartzer, Non-Executive Director and Chair of the Board Risk Committee Mr. Ewen Crouch, and Chairman Mr. Lindsay Maxsted to step down from the board and company18.

After the awaited 2019 AGM on December 12, 2019, results were released that 35.90 per cent of shareholders voted against the adoption of the remuneration report, earning them a strike two. However, 91.26 per cent of shareholders voted no on the conditional spill resolution19. All directors except Mr. Ewen Crouch, who had withdrawn his re-election, passed the re-election and election on their positions20. Mr. Maxsted stated that the Board will be decreasing 20 per cent in executive pay, and deduct short-term awards to zero.

Westpac's board skills matrix and expertise

Looking into Westpac's board expertise and skills, one may want to deduce if the Board had the right skills set to manage the affairs of the Board. According to CGLytics' Board Expertise application, Westpac has a significant number of directors that have experience in advisory which is timely and relevant during this turbulent time. Westpac has claimed that the Board is competent in finance, including financial risks. However, the Board lacks expertise in risk management, specifically in non-financial risk to account for risks such as reputational damage, for the next AGMs. Another expertise that is crucial in this time is legal, where compliance and governance is much needed to enforce regulatory frameworks provided by Austrac, APRA and other regulators 21.

Westpac has responded by appointing a new Chairman, Mr. John McFarlane, who has over 40 years of experience in banking and is expected by shareholders to quickly settle current issues as well as appoint a new Chief Executive Officer22. Another step that Westpac has taken following the scandals is to appoint Accountability Review Advisory Panel members. The following members of the panel are: Mr. Colin Carter, Dr. Kerry Schott and Dr. Zygmunt Switkwoski23. The panel's objective is to give recommendations on risk governance and accountability in response to Austrac.

Are you prepared for the 2020 proxy season? The CGLytics platform provides users with a wealth of governance insights. From executive remuneration, board composition and risk indicators, CGLytics empowers Companies, Boards, Investors and Third-parties to be one step ahead.