In 2013, the venture capital market produced a strong performance for the third consecutive year. Financing activity approached the highest level since the end of the dot-com boom, and the number of venture-backed US issuer IPOs was the largest since 2007. Based on activity to date in 2014, both financing and liquidity conditions appear to remain favorable for VC-backed companies.

The number of reported venture capital financings dipped 5%, from 3,649 in 2012 to 3,480 in 2013. Despite the normal lag in deal reporting, the tally for 2013 was the third-highest annual total since the collapse of the dot-com bubble. Once all 2013 deals are accounted for, the decline from 2012 is almost certain to be erased and the 2013 count is likely to end up as the highest since the all-butunapproachable total of 6,448 financings in 2000. The quarterly figures of 849, 874, 856 and 901 financings in 2013 are particularly encouraging in light of delayed reporting of some second-half transactions. 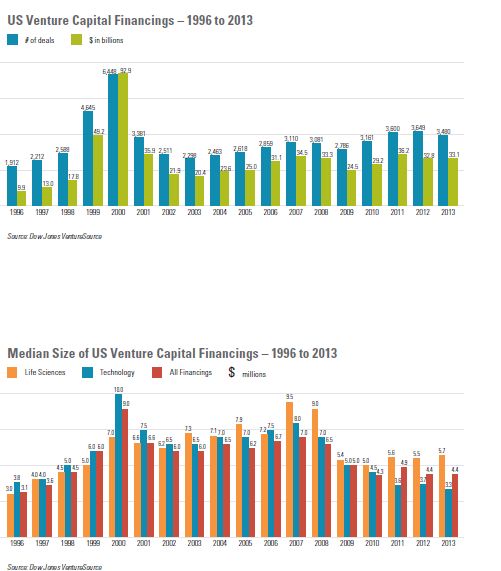 Proceeds from seed and first-round deals represented 18% of all venture capital financing proceeds in 2013, down from 21% in 2012. The percentage in both years is well short of the 32% average for the 1996 to 2000 period, reflecting the proliferation of earlystage companies receiving smaller financing amounts and surviving on lower burn rates than historical norms.

Technology companies accounted for 30% of all venture capital financings in 2013, compared to 33% in 2012. After declining for three consecutive years, the market share for life sciences companies increased from 20% in 2012 to 21% in 2013. The next-largest sectors in 2013 were business and financial services (22% market share) and consumer services (20% market share).

California—which has led the country in financings in each year since 1996 (the first year for which this data is available)— accounted for 40% of all venture financings in 2013 (1,389 financings).

New York, home to companies with 349 financings in 2013, finished second in this category for the second year in a row, ahead of Massachusetts with 294 financings. Texas (150 financings) and Pennsylvania (95 financings) rounded out the top five positions for 2013. 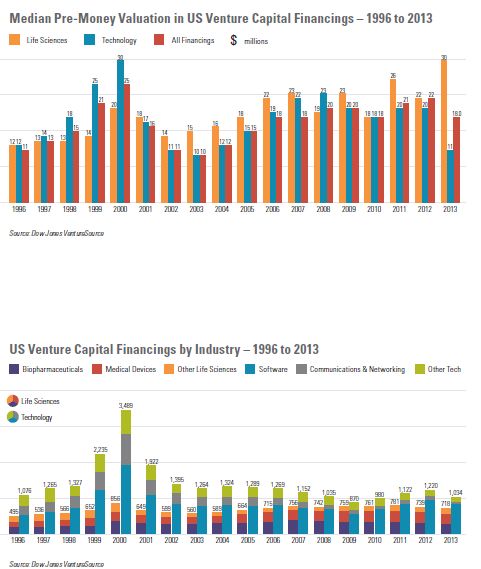