The Metaverse Standards Forum (MSF) was announced on June 21, 2022. The MSF aims to "foster interoperability standards for an open metaverse," and its existence could accelerate developing metaverse technologies. This post will provide an overview of standards development organizations (SDOs) and how they advance technologies through cooperation between competitors. It will also explore how and why the MSF seeks to differentiate itself from SDOs, including with regard to intellectual property.

(For those interested in what the metaverse is, please see our previous Holland & Knight posts: The Metaverse: Building a Fairer World in Virtual Reality and The Metaverse: Patent Infringement in Virtual Worlds.)

I. What Are SDOs?

SDOs are collaborations between competing entities to develop global technological standards. Absent these collaborations, competing technologies will appear that are incompatible with one another. For example, anyone who has traveled beyond North America learns fast that other countries do not use the same power outlets as we do. To solve the problem, travelers must carry around bulky converters to connect their electronics into outlets in foreign nations.

The power outlet example illustrates where SDOs focus most of their attention: interfaces, or that space between two components (e.g., plug and outlet). Interfaces loom large over any engineering project where components must interact with each other in some way, and engineers will spend a great deal of time developing these connections between components. In the power outlet example, builders need to install outlets, and electronics manufacturers need to put plugs on their devices. The interface problem there asks what shape both ends should be so they fit together, as well as what voltage the outlet should provide and the plug receive. By defining the answer to those questions in written standards specifications, both plug and outlet manufacturers have a reference point to understand what to expect from one another.

Because global standardization never happened with power plugs and outlets, travelers need to pack their own separate interface: a power adaptor that can receive any type of plug on one end and fit into any type of outlet on the other. These power adaptors are effectively trophies of inelegant, unnecessary engineering (and I have to admit that I cringe a little whenever I put one in a suitcase).

II. The Success of SDOs

While electrical plugs and outlets are not subject to any global standard, many other industries have adopted global standards and found tremendous success in the marketplace. Perhaps the best example of such success is the 3rd Generation Partnership Project (3GPP), which develops global cellular communications specifications.

3GPP arose to solve the "electrical plug problem" in telecommunications. In the 1980s and 1990s, different geographic regions had different cellular standards. Here is just a partial list of those "1st Generation" (1G) standards: AMPS (U.S. and the Americas); NMT (Sweden, Norway, Denmark, Finland and Iceland); TACS (U.K.); C-Netz (West Germany, Portugal and South Africa); Radiocom 2000 (France); RTMI (Italy); and MCS-L1/L2 (Japan). This fractionalization of cellular standards meant that your (then very large) phone only worked within national boundaries. The incompatibility was due to differing interfaces between phones and networks country to country. In effect, a French phone and a Norwegian network did not "speak the same language."

In the early 1990s, the European Telecommunications Standards Institute (ETSI) sought to build a global cellular standard such that the interface between phone and network was fixed and defined. The result was the Global System for Mobile Communications (GSM), which was deployed broadly across Europe and ushered in numerous important advancements in cellular technologies (including SIM cards and SMS messaging). GSM eventually captured roughly half of the U.S. market, but even that market was fractured. The other roughly half of U.S. cellphones used the IS-95 (CDMA) standard.

Since then, 3GPP has developed other global cellular standards well-known to consumers: LTE and 5G. International travelers still need to worry about foreign roaming charges, but their phones will work anywhere on Earth because the communications interface between the phone and any network is now the same worldwide. The history of cellular standards is the Tower of Babel story in reverse: fractured languages abandoned in favor of a global tongue.

The success of 3GPP is apparent to anyone using a smartphone today: 3GPP networks incorporate the best telecommunications ideas available to provide high-speed data to users. Interestingly, these ideas come from fierce competitors in the cellular marketplace. These competitors are collaborating to develop the best possible cellular standards, but each continues to compete to build the best smartphones and infrastructure equipment.

This mix of collaboration on interfaces and fierce competition on all other elements of a product creates a tension with regard to intellectual property rights (typically referred to as "IPR"). Entities that participate in SDOs are often developing related, patented technology at the same time as they define the standards. These entities may want their patented technologies to become part of the developing global standard at the SDO because global adoption will make those patents more valuable.

To resolve this IPR tension between collaboration and competition, SDOs typically require participating entities to openly declare their IPR as essential to the developing standards. (For example, 3GPP requires all of its meetings to begin with a formal "Call for IPR.") Entities must declare their IPR so it is disclosed to all members of the SDO. If the SDO adopts the patented technology, then the declaring company can still benefit from global adoption, but often must agree to license the technology to others on fair, reasonable and non-discriminatory (FRAND) terms.

Like 3GPP, the MSF has positioned itself as an umbrella organization for various metaverse SDOs: 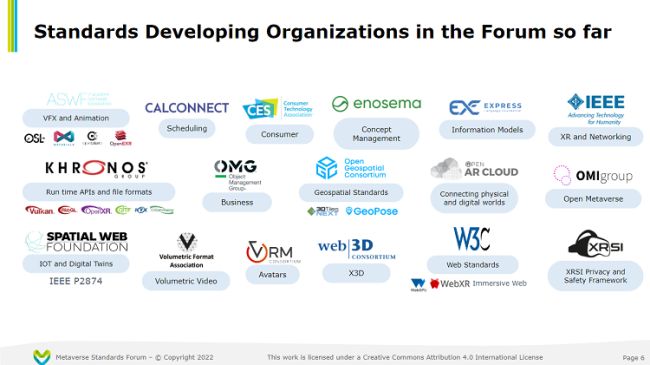 Unlike 3GPP, however, the MSF is explicit that it is "NOT another SDO[,]" and that all standardization activities will occur within the member SDOs. The MSF will instead focus on fostering interoperability between these various SDOs.

As an analogy, the MSF compares the problem it seeks to solve to the problem of interoperable standards in computers. Computers are a collection of various global standards, including Wi-Fi for wireless networking, Bluetooth for short-range wireless connections, HDMI for video output and USB for peripherals. These various standards need to "talk to" one another using standardized interfaces for the computer to work. A similar same problem arises in the metaverse context. There is a host of SDOs developing hardware standards (e.g., for headset equipment) and software standards (e.g., for virtual assets and virtual worlds). For a system (or systems) to utilize these metaverse standards, they will need to interoperate over standardized interfaces. The MSF plans to foster interoperability through "prototypes, hackathons, plugfests and tooling projects." The early list of topics that MSF may work on includes the following, which spans nearly the entire metaverse domain: 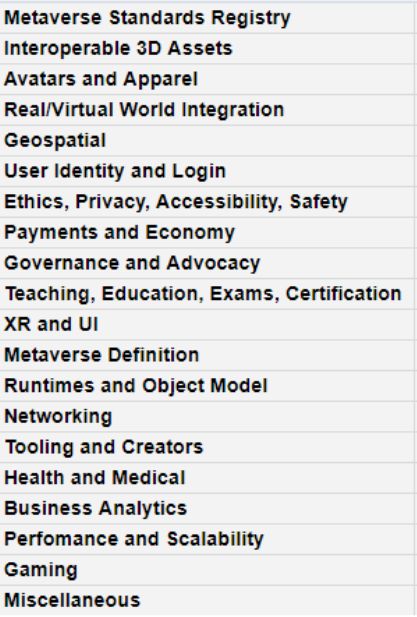 The MSF is just beginning to perform its work, but it has the potential to do for the metaverse what 3GPP did for cellular networks: promote the best ideas in the space, build solutions that benefit consumers and accelerate adoption of the technology.