2020 brought the COVID-19 pandemic and other headline-grabbing challenges, along with "the usual" quadrennial questions around the U.S. election. Early in the year, businesses and dealmakers focused on the pandemic and revised their strategies as understanding of its impact evolved. The M&A market, like the overall economy, was hit hard, before rebounding later in the year.

In this alert, we look at some of the ways M&A changed in 2020, particularly those changes likely to continue into 2021.

Unsurprisingly, M&A activity reached record lows in early 2020, as the pandemic encircled the globe and companies acted to protect their personnel and businesses and faced an unprecedented reality of closures, social distancing and other restrictions. Companies reacted quickly though, getting back to potential deals that had been put on hold and moving on new deals. Dealmakers applied new tools and processes to an almost exclusively remote work environment. Globally, after falling 25% in the second quarter compared to the first quarter, M&A activity rose 90% in the second half of the year, ending the year with only a 3% decline in volume from 2019.1

In the U.S., deal value likewise jumped back in the third quarter and even more in the fourth quarter, but didn't make up for the drop in the second quarter; deal value for the year ended up down 21%. Reflecting a potential impact of the pandemic, acquisitions out of bankruptcy rose 59% by value. 2 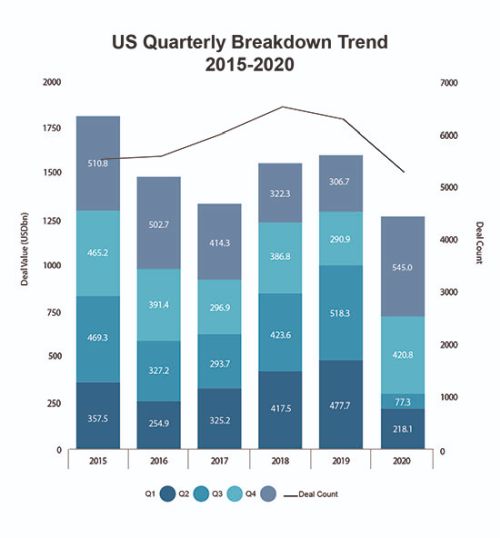 While the private equity market experienced a short jolt early in the year, the industry posted record numbers in the second half, finishing the year with the highest annual value since the global financial crisis.4 As we covered in last year's Key M&A Trends alert, private equity firms entered 2020 with record levels of cash on hand, which allowed them to look for opportunities in the midst of a tumultuous market. A more detailed look at PE trends is provided in our Global PE Trends 2020 and Outlook for 2021.

Technology was the winning sector for M&A activity in 2020, dominating market share as the world moved into an online environment. Globally, the Technology, Media and Telecommunications (TMT) sector clocked $850 billion in deal value in 2020, almost twice that of the next best sector, Energy, Mining and Utilities ($480 billion). In the U.S., Technology, the only sector to grow in value over 2019, was the most active sector, followed by Pharma, Medical and Biotech. 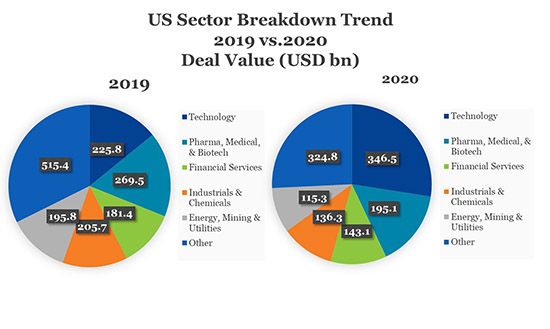 While 2020 proved, even more than most years, that nobody can predict the future, we expect many of 2020's M&A trends to continue into 2021. Much attention is focused on the pandemic, including the impact of vaccines, and questions also remain about the change in the U.S. administration and other issues. But equity markets are at record levels, PE dry powder remains plentiful (even without counting the surge in SPACs, as described below), debt is available, and acquirors are looking to strengthen their businesses and deploy their cash.5

1. M&A Deal Terms Evolve in Response to the Pandemic

"Many buyers requested additional reps and warranties, and target companies expanded their related disclosures, to address the various disruptions resulting from the pandemic.

As economies, businesses and governments responded to the pandemic, buyers and sellers scrutinized existing agreements, looking to avoid the unexpected. Some pending deals, particularly those signed before or in the early days of the pandemic, headed into court – most of those settled, with deals recut or abandoned. Terms in new agreements evolved in response, with some changes likely to remain in agreements long after the pandemic recedes.

The pandemic virtually eliminated in–person meetings. Buyers and sellers moved quickly to adapt their diligence and other deal processes. Parties strove to understand technology solutions for remote diligence, conferencing and other logistics (not to mention the new dress codes). Deal processes are unlikely to return completely to the pre-pandemic "normal."

The federal government took unprecedented steps to support businesses and, in particular, their employees, resulting in potential liabilities that must be addressed in acquisition agreements. Chief amongst these was the Paycheck Protection Program ("PPP"), created in March by the Coronavirus Aid, Relief, and Economic Security Act (the "CARES Act") and extended in the stimulus package signed on December 27. The PPP provides loans, principally to small businesses, that, in the right circumstances, are forgiven without repayment – but otherwise must be repaid.

Potential buyers can address the first two items above via due diligence and reps and warranties. The consents, and any necessary escrow, must be incorporated into the agreement structure and pursued prior to closing. Especially in transactions where the purchaser's diligence has raised cause for concern around PPP loan eligibility or the ability to obtain forgiveness of the loan, a purchaser can go a step further by requesting a special indemnity from the seller.

While once considered principally as an option for less attractive IPO candidates, private company merger targets now may consider de-SPAC transactions a more practical transaction alternative. Part of the reason is the SPAC structure has evolved to create a much more competitive alternative to IPOs, providing the opportunity for greater certainty around execution, but, typically, at the cost of greater dilution and expense.

Given the amount of capital raised and the number of SPACs searching for targets, we expect to see significant de-SPAC transaction volume in 2021 and 2022. We also expect that targets may have some more leverage to negotiate favorable economics, particularly with SPACs nearing the end of their 18-24 month acquisition periods. The SPAC model may continue to evolve, requiring sponsors to put more of their capital and equity at risk. SPAC shareholders and regulators also are likely to take a closer look at proposed transactions and disclosures.

Governments responded to the pandemic by shutting down national borders on a global scale. Governments also became more concerned with supply chains and sustainability, with particular focus on medical supplies. Even as cross-border M&A volume fell, governments focused on national security issues related to foreign investments.

CFIUS. The U.S. continued to implement the legislative expansion of authority of the Committee on Foreign Investments in the U.S. ("CFIUS").

The increased jurisdictional scope of CFIUS and the mandatory filing requirement have resulted in a significant increase in the use of the CFIUS streamlined joint declaration process that allows for a 30-day review period rather than submitting a full joint voluntary notice that has an initial 45-day review period plus potentially an additional 45-day investigation.

Targeted Company and Human Rights Actions. In a (very) high-profile decision, CFIUS determined in August that TikTok and its parent company, China-based ByteDance, present national security risks and ordered TikTok to sell its U.S.-based business. This action occurred in parallel to the administration's halted efforts to prohibit certain transactions with TikTok (and WeChat). Talks between TikTok and CFIUS are ongoing. Additionally, the Commerce Department added numerous Chinese companies to its Entity List following its determination that these companies were involved in human rights violations and abuses.

While the specific priorities of the new administration are not yet known, the heightened attention to national security, and the need for deal parties to prepare for contingencies, is expected to continue.

Accelerating a pre-pandemic trend, buyers and sellers are paying more attention to environmental, social and governance ("ESG") factors, particularly those relating to climate change, privacy and diversity and labor practices. Such factors have gained prominence in corporate governance generally, as reflected in the Business Roundtable's 2019 redefinition of corporate purpose to include commitments to customers, employees, suppliers and communities, as well as to shareholders. Activists and institutional investors, including Blackrock, Vanguard and State Street, have pushed boards to act on ESG measures, citing the long-term benefits to individual companies and to their own investors. New funds are being formed to invest in companies with high ESG attributes and in companies with specific missions. States and other regulators have imposed substantive and disclosure requirements, such as for board diversity. And consumers and shareholders continue to push for attention to ESG issues.

As ESG factors are incorporated into M&A playbooks, companies increasingly may want to consider, among other things, the following:

5. These and other factors are reflected in the expectations of tech M&A dealmakers. Please see our survey results, "MoFo Survey: Tech M&A Leaders Overwhelmingly Bullish for 2021 Amid 'COVID Comeback,'" released on January 12.