World Music Day, or Make Music, was launched in 1982 in France as the Fête de la Musique, it is now held on the same day in more than 1,000 cities in 120 countries. In this article, we explore some of the patented inventions in the world of music.

The invention of the electric guitar shaped the sound of most of the previous century, and arguably, the music of today. First picked up by jazz, country and blues musicians, the electric guitar quickly became a success with its ability to produce new sound effects, such as "bending" the pitch of notes, and impressive glissando and deep vibrato effects.

An electric guitar uses one or more pickups to capture mechanical vibrations of a string and convert them into electrical signals, which are then amplified and reproduced by loudspeakers. This is unlike a classical guitar, where the vibrations of the strings are transmitted via saddle to a soundboard (the front piece of the guitar's body). As the soundboard vibrates, the sound is amplified by the hollow body of the guitar.

It is difficult to give credit to any one person for inventing the electric guitar, because electric guitars evolved from their acoustic ancestors through various attempts to electrically amplify the vibrations of a string instrument. For example, patents from the early 20th century show telephone transmitters placed inside of violins to amplify the sound. George Beuchamp was the inventor of the "frying pan" lap steel guitar (left) - the first electrically amplified stringed instrument to be marketed commercially. The distinctive Fender Stratocaster (the "Strat" – on the right) came 30 years later in the 1950s.

The earliest machines worked by recording sound onto a sheet of foil wrapped around a cylinder, which was slowly rotated and moved in the axial direction. The sound waves vibrated a diaphragm connected to a stylus, which engraved the sound waves onto the foil of the cylinder as grooves. The sound was played back by repeating the procedure in reverse: as the stylus was traced back over the grooves, it would vibrate the diaphragm which played back the sound. A peculiar consequence of this is that it was possible to overdub (layer) new sound onto the recording being played back. 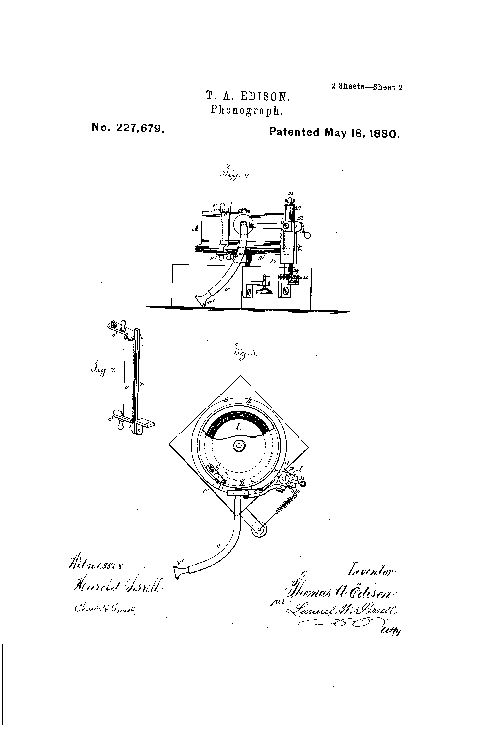 The invention of a microphone was undoubtedly an important technological development in music's history. The idea of recording a human voice so that it can be reproduced elsewhere has been developing over many millennia. Some early examples of this could be found in fifth century BC Greece, where performers would wear masks with horn-shaped mouth openings so that their voices could be acoustically amplified and heard even in the most remote parts of the amphitheatre. In 1665 Robert Hooke experimented with "lovers' telephone" – two tin cans joined by a string, where sound from one cup was transmitted via the mechanical vibrations of a string and then converted back. 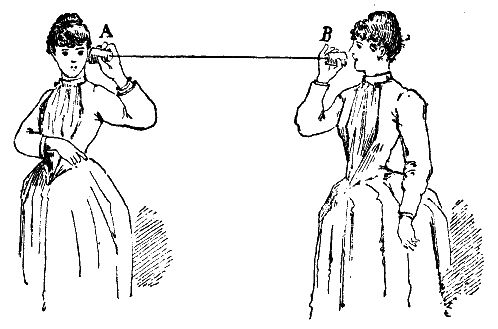 The working principle behind the early microphones is that sound waves cause a diaphragm to vibrate, the movement of which triggers the change in an electrical property (such as resistance) of a medium to which the diaphragm is connected. One of the early examples includes a metal plate fastened in a wooden box or plate, with a metal ball disposed against it, with current passing through the plate and ball. Vibrations of the metal plate cause the pressure between the plate and the metal ball to vary, which affect the strength of the current. 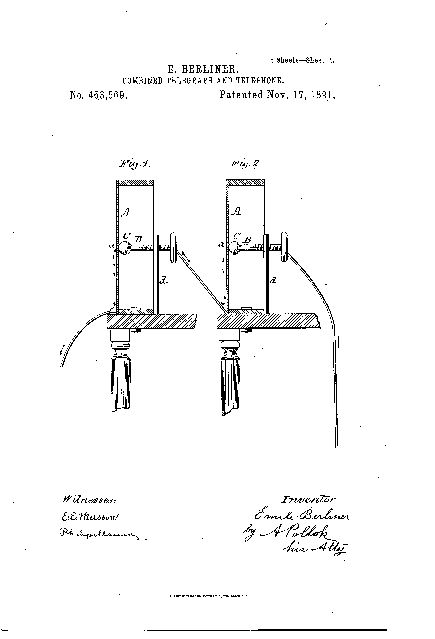 Another early example is the carbon microphone, which uses tightly packed carbon granules disposed between two metal plates to convert mechanical vibrations into electrical signals. One of the plates acts as a diaphragm, which vibrates and causes the carbon granules to deform. As the carbon granules deform, the contact area between each adjacent pair of granules changes, causing the resistance (and therefore the current passing through) to vary accordingly.

Arguably, one of the most rock-and-roll patents on the register is the Musical Instrument Support granted to Eddie Van Halen.

The supporting device supports the musical instrument by resting on the player's body, allowing the player to explore a new way of creating and performing music. 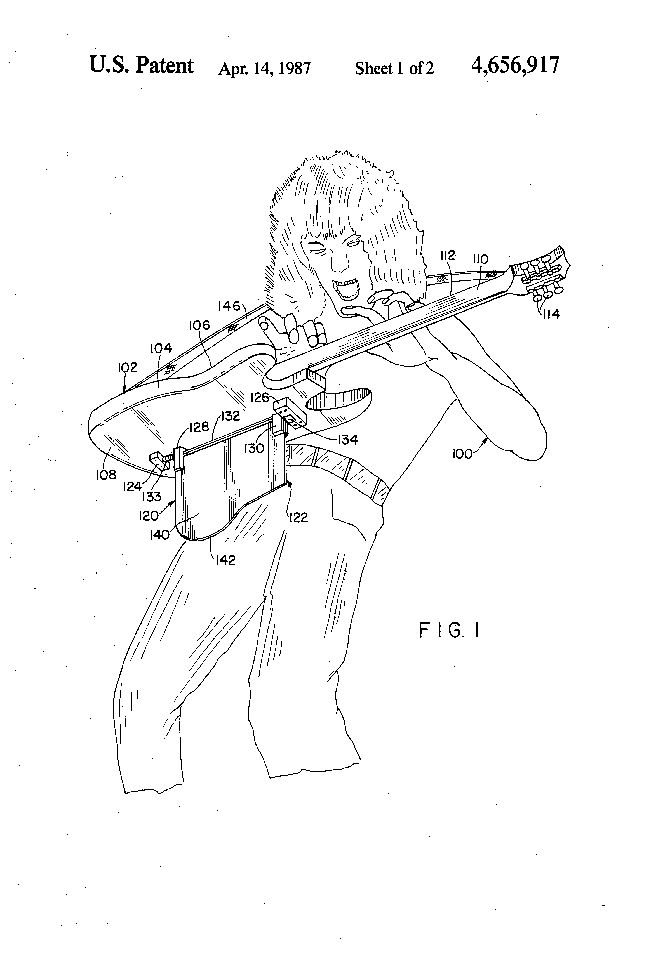 ARTICLE TAGS
UK Intellectual Property Patent Media, Telecoms, IT, Entertainment Music and the Arts
POPULAR ARTICLES ON: Intellectual Property from UK
The IP In NFTs – What Is Being Purchased?
Herbert Smith Freehills
As we reported in our first blog post in this series, non-fungible tokens (NFTs) are a new asset class that is being adopted eagerly across all sectors...
By Design: Where To File First?
Haseltine Lake Kempner LLP
When applying to register a design, most applicants will eventually want to secure protection in many places around the world. However, it is typical to begin with a single application in one country or region, ...
European Software Patentability: The Big Split
Kilburn & Strode
The long and winding code – a short history of European software patentability through the lens of pop culture
Protection For Plant Varieties In Europe And The UK Post-Brexit
Dehns
The International Union for the Protection of New Varieties of Plants (UPOV) functions to "provide and promote an effective system of plant variety protection...
French Supreme Court Says Cross-border Patent Infringement Claims May Be Possible
Herbert Smith Freehills
The French Supreme Court issued a decision quashing a Paris Court of Appeal decision and thereby opening the door to the jurisdiction on the merits of French courts to rule on cross-border...
Patenting DLT Innovations In Europe
Marks & Clerk
In Europe, inventions that utilise distributed ledger technology will generally fall under the heading of "computer-implemented inventions (CIIs).
FREE News Alerts
Sign Up for our free News Alerts - All the latest articles on your chosen topics condensed into a free bi-weekly email.
Register For News Alerts
Article Tags
UK Intellectual Property Patent Media, Telecoms, IT, Entertainment Music and the Arts
Similar Articles
Powered by mondaq AI
MATCH
40%
Deadline For CMA To Publish Its Market Study Into Music Streaming Herbert Smith Freehills
47%
Music Rights - Striking A Chord With Investors Mayer Brown
41%
Too Many Trap(P)S For "The Trapp Family? Taylor Wessing
40%
House Of Commons Digital, Culture, Media And Sport Select Committee Publishes Report Into The "Economics Of Music Streaming" Calling For A "complete Reset" To Fairly Reward Performers And Creators Wiggin
Related Articles
The IP In NFTs – Strategies For Protecting Your Brands And Products In The Metaverse Herbert Smith Freehills
Photonic Wire Bonding Marks & Clerk
G 1/19: Did This Decision Surprise Us? HGF Ltd
Preventative Measures Being Taken In Response To The JPO's Recent Restrictions On "Multi-Multi Claims" Marks & Clerk
Artificial Intelligence (AI) In The Agritech Space Marks & Clerk
Mondaq Webinars
Litigation Funding in Canada
Nomos Capital Corp.
Private Wealth - Getting it Right: Trusts, Foundations and Funds
Dixcart Group Limited
More Webinars
Comparative Guides
Anti-Corruption & Bribery
Artificial Intelligence
Banking Regulation
Blockchain
Cartels
More Guides
Mondaq Advice Centres
UK
Coming to and Investing in the UK
Global
Trademarks in SAARC Countries
More MACs
Curated Content
Protection For Plant Varieties In Europe And The UK Post-Brexit
Dehns
The Silent Treatment: The EPO's Approach To Non-therapeutic Methods Encompassing Therapeutic Effects
Dehns
Implications Of The Genetic Technology (Precision Breeding) Bill On The Life Science IP Sector
Dehns