South Africa: The Role Of The Principles Of Good Faith And Ubuntu In The Law Of Contract

by Bianca Da Costa , Andricia Hinckemann and Barr-Mary Tyzack
Fasken
Your LinkedIn Connections
with the authors

Historically, the roles of fairness, reasonableness and good faith in the law of contract have been the subject of debate; one of the most controversial issues is whether a court can refuse to enforce a valid contract if it considers that the enforcement would be unfair, unreasonable, or unduly harsh. In light of this, our courts have developed principles governing the enforcement of contracts, through principles such as good faith and ubuntu.

In the distinguishable case of S v Makwanyane and Another 1995 (3) SA 391 (CC) 484, the Constitutional Court explains ubuntu as humaneness, personhood and morality. Metaphorically, it expresses itself in umuntu ngumuntu ngabantu, describing the significance of group solidarity on survival issues so central to the survival of communities. The court stresses that the spirit of ubuntu "...emphasises respect for human dignity, marking a shift from confrontation to conciliation..."

HM Du Plessis, a senior lecturer in the University of South Africa1, makes a key distinction between the concept of good faith and ubuntu and provides that although both notions encourage contractual justice between the parties, ubuntu includes an additional duty to promote the parties' and community's social and economic well-being. As a result, unlike good faith, ubuntu is concerned with promoting substantive equality in private relationships

It is against this background, that we set out a timeline below on how the courts have applied the principles of good faith and ubuntu, which has influenced the interpretation of contracts over time.

Good faith and ubuntu, from a case law analysis: 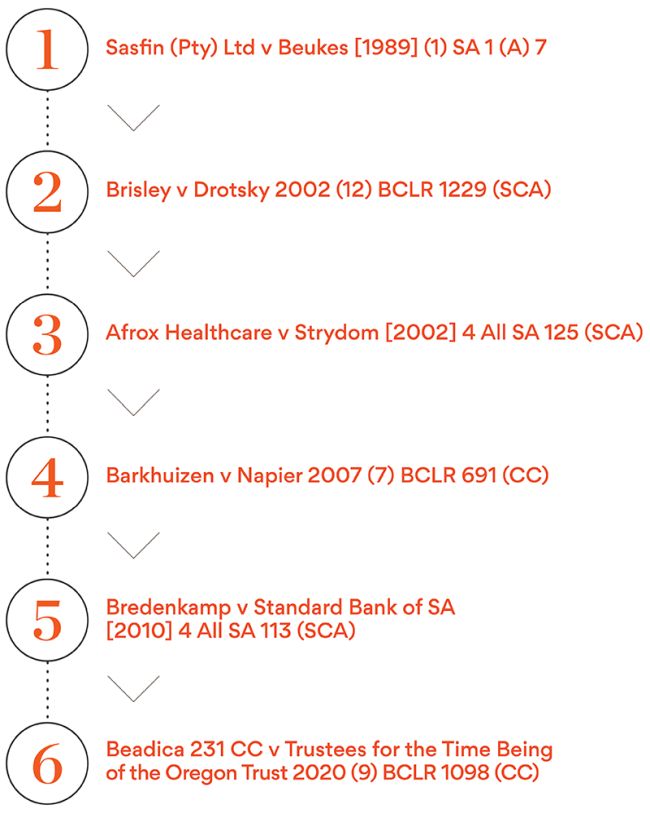 The above case law emphasizes the position that principles such as good faith, fairness, reasonableness and ubuntu do not provide a free-standing basis upon which a court may interfere in contractual relationships but rather that the application of these principles is facilitated through the rules of contract law and it is only where it is so unfair, unreasonable or unjust that it can be said that a court may interfere with an agreement by considering principles such as good faith and ubuntu.