Uzbekistan: Privatization Of Land In Uzbekistan

by Kosta Law Firm
Kosta Legal
To print this article, all you need is to be registered or login on Mondaq.com.

On August 13, 2019, the Law on Privatization of Non-Agricultural Land Plots (the "Law") was adopted. An unofficial translation of the Law is available in English at the following link: https://kostalegal.com/publications/law-on-privatization-of-non-agricultural-land-plots. The Law will come into force on March 1, 2020.

The adoption of the Law is an initial point from where the land privatization reform starts. Continued state ownership of lands is subject to partial termination as the land privatization process mainly concerns non-agricultural land plots. As per the Article 8 of the Land Code, "agricultural land is land provided for agricultural needs or designated for such purposes. It includes irrigated and rain-fed lands, croplands, lands with hayfields, permanent grassland, permanent crops and vineyards." Land plots that fall outside the definition provided will be within the scope of the Law.

Together with the Law, Presidential Decree No. UP – 5780 of August 13, 2019 (the "Decree") was signed. Under this document, the Government clarified the reason of delayed effective date. As per the Decree, a legal experiment for testing the procedure of non-agricultural land privatization will be carried out in Syrdarya region of Uzbekistan before the Law enters into force. The experiment is aimed at identifying shortcomings and may help amend the Law. Moreover, the adoption of the Decree implies that the Law will be effective within the territory of Syrdarya region before it officially enters into force. By the end of September, corresponding legislative act will be signed for the experiment to start.

According to the Law, the regulation of land privatization is centered on the following government authorities:

The concept of Land privatization and its key principles

"Land privatization" for the purposes of this Law is the transfer of land rights to private parties that are residents of the Republic of Uzbekistan. According to the Law, privatization is based on the principles of legality, voluntariness (privatization is carried out solely on a voluntary basis), a fee-based principle, the unity of privatized land plots and immovable property located on them as well as the principles of openness and transparency (free access to all information concerning privatization).

Subjects of the Law

As per the wording of the Law, residents of the Republic of Uzbekistan, both individuals and legal entities are eligible to privatize land plots. Non-residents and stateless persons are not regarded as subjects of the Law and, as a result, not allowed to privatize land plots. Stateless persons and non-residents are not entitled to acquire privatized land plots unless otherwise provided by the Land Code and/or international agreements of the Republic of Uzbekistan.

Objects of the Law 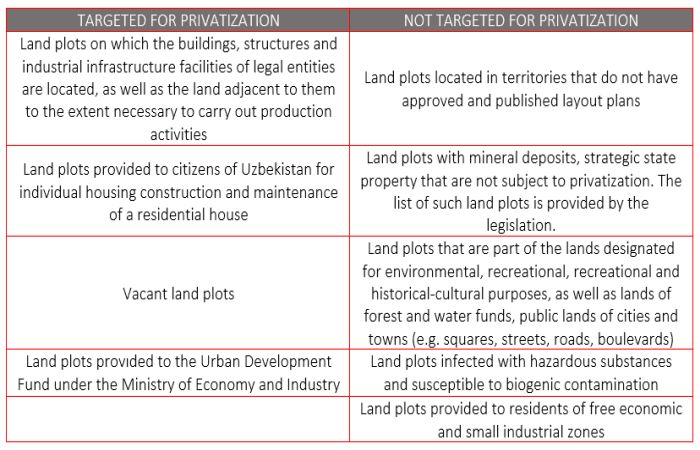 p>As the Law provides, resident legal entities are allowed to privatize land plots on which the buildings, structures and industrial infrastructure facilities belonging to legal entities are located, as well as the land adjacent to them to the extent necessary to carry out production activities. Whereas citizens are allowed to privatize land plots provided to them for individual housing construction and maintenance of a residential house.

It is to note that the Law foresees the adoption of the Regulation on the Provision of State Services on Land Privatization by the Cabinet of Ministers. Such Regulation shall establish more clarified privatization procedures and, among other things, may provide for applications of standard forms. 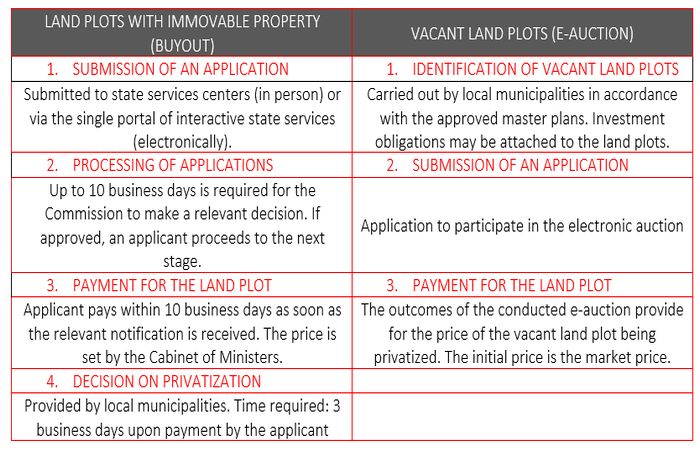 Pursuant to the Law, an applicant may be denied the right to privatize the land plots only in the following cases:

Unsatisfied applicant has a right to appeal to the Administrative Court against decisions taken by the Commission.

The Law allows for the seizure of privatized land plot only in the following cases:

ARTICLE TAGS
Uzbekistan Real Estate and Construction Construction & Planning Real Estate
POPULAR ARTICLES ON: Real Estate and Construction from Uzbekistan
Importance of intention to be bound on execution of Heads of Agreement (HOA)
Holding Redlich
The HOA was expressed as a valid, binding agreement, giving rise to a binding option to purchase the hotel.
Theyre suing us for the unpaid amount of the deposit, but they sold the property to someone else and made a windfall. Which case won?
Stacks Law Firm
Interesting case where sellers sue buyers for balance of deposit.
Renting From A Non-Canadian Tax Resident? You May Have Tax Obligations
Crowe MacKay LLP
What many tenants don't know is there is a specific section of the Income Tax Act indicating that they are responsible to withhold 25% of the rent they pay to non-resident tax residents of Canada.
Electronic Affixing Of Seal Of An Owners Corporation
Vincent Young
It was always the case that the seal of an Owners Corporation needed to be affixed physically and in the presence of appropriate witnesses to comply with s273 of the Strata Schemes Management Act...
Real Estate Comparative Guide
NEXUS Avocats
Real Estate Comparative Guide for the jurisdiction of Switzerland, check out our comparative guides section to compare across multiple countries
New Restrictions On Selling Land: An Overview Of The Prohibition On The Purchase Of Residential Property By Non-Canadians Act
McMillan LLP
On January 1, 2023, the Prohibition on the Purchase of Residential Property by Non-Canadians Act (the "Act") will come into force for a period of two years. The Act bans non-Canadians...
FREE News Alerts
Sign Up for our free News Alerts - All the latest articles on your chosen topics condensed into a free bi-weekly email.
Register For News Alerts
Article Tags
Uzbekistan Real Estate and Construction Construction & Planning Real Estate
Similar Articles
Powered by mondaq AI
MATCH
91%
Legal Framework For Privatization Of Non-Agricultural Land In Uzbekistan Dentons
87%
Uzbekistan Reinforces Legal Framework For Privatization Of Land Kinstellar
81%
Law On Privatization Of Non-Agricultural Land Plots Kosta Legal
78%
The Process Of Privatization Land Plots For Non-agricultural Purpose Is Amended In Uzbekistan GRATA International
70%
Legislative Amendments In Land Tenure Arrangements In Uzbekistan GRATA International
Related Articles
Protection Of Property Rights Is Strengthened In Uzbekistan GRATA International
There Has Been Established The List Of States Whose Citizens Can Buy Real Estate Without A Residence Permit In Uzbekistan GRATA International
Uzbekistan Has Taken Measures To Improve The Efficiency Of Special Economic Zones GRATA International
There Have Been Taken Steps To Boost Private Investment And Further Build Confidence In The Business Community In Uzbekistan GRATA International
There Has Been Established The Procedure For Privatization Of Non-agricultural Land Plots In Uzbekistan GRATA International
Mondaq Webinars
The New Swiss Data Protection Act - What You Need To Know
FABIAN PRIVACY LEGAL GmbH
Global Offshore Fintech Focus on Crypto: Laws, Regulations and Trends [REPLAY]
Carey Olsen
More Webinars
Mondaq Advice Centres
Global
Trademarks in SAARC Countries
More MACs
Upcoming Events
Mondaq Social Media