by STA Law Firm
STA Law Firm
0 Liked this Article
To print this article, all you need is to be registered or login on Mondaq.com.

The hidden gem of UAE, the emirate of Ras Al Khaimah (RAK) is a mesmeric stretch of golden beaches, terracotta desert, backed up by the wild mountains of Hajar and an ocean of Bedouin Oasis is just out of the shadow of Dubai's extravagant skyscrapers. The pearly-white and multi-domed  Sheikh Zayed Mosque overlooks the Al Qawasim Corniche, a paved boulevard with kiosks, benches, and restaurants fronting the creek.RAK is also the gateway to the glorious Musandam Peninsula, an enclave of Oman. This emirate has some of the most diverse landscapes in the country, from opulent date palm havens to slithering dunes and the unambiguous Rocky Mountains. Captivating Gulf waters bring not only adventures but also a sea of business opportunities to expats. The UAE's northernmost emirate RAK is not just limited to its diverse scenery ranging from sandy beaches to sprawling oases, but the tranquil Gulf comes with numerous business opportunities.  In recent years, RAK has witnessed exponential growth, resulting from the free-trade zone established and other luxurious tourist spots.

UAE's fast-rising economy and culturally diverse businesses and industries attract corporations from all around the world. Free Zones in the UAE are specific areas that have a distinct set of rules than the rest of the UAE and has a unique framework of rules for tax, import, and customs. The UAE has several free zones across Dubai, Abu Dhabi, Sharjah, Fujairah, Ajman, Ras al Khaimah and Um Al Quwain and RAK Maritime city is one novel free zone amongst others. Free-trade zone exemptions are:

Each Free Zone has outlined around at least one business industry area and offered licenses to organizations inside those classifications. An autonomous Free Zone Authority (the FZA) represents each free zone and is in charge of issuing Free Zone working permits and helping corporations with setting up their businesses in the Free Zone. Financial specialists can either enroll another corporation as a Free Zone Establishment (the FZE) or just set up a branch or agent office of their current or parent organization based inside the UAE or abroad. An FZE is a limited risk organization represented by the standards and directions of the Free Zone in which it is set up. Except for getting nationality in the UAE, the arrangements of the Federal Law Number 2 of 2015 concerning the Commercial Companies Law (the CCL) don't make a difference to FZEs, given that the Free Zones have exclusive arrangements directing such corporations.

Ras Al Khaimah has five Ports which play a significant commercial window to the rest of the World. These ports are essential to the Emirate's economy which include Saqr Port, the region's largest bulk handling terminal. Others include Al Jazeera Port, focusing on dry docks and ship repair, Al Jeer Port, which houses livestock handling facilities and yachts, and RAK Khor Port, which provides warehousing and where plans are getting developed for cruise terminals and RAK Maritime City. RAK Maritime City is a part of the Free Zone facility, which is one of the most emerging business hubs in the Middle East offering its conveniently-located logistics  gateway, excellent infrastructure,  flexible  company set-up agendas and technical support services.RAK Ports provides a wide range of high-quality marine services including pilotage, harbor towage, vessel mooring, vessel traffic control, hydrographic surveying, emergency response, aids-to-navigation and lay-up at anchorage for all the vessels. The team of trained and well-experienced pilots, tug-crew, technicians, surveyors, and a group of staff led by The Harbor Master support the above services.

RAK's location as the first port of call into the Gulf with5km of quay wall for dedicated berths and private jetties is unique and encourages industries to establish their businesses. RAK Maritime City Free Zone Authority inspires long-term partnerships with the industries connected with the maritime. Maritime City pursues to attract between 40 and 50 significant tenants with plots starting from 25,000 square meters and lease agreements ranging from 25 to 99 years. RAK Maritime City FZA is not just for business owners but also aspires to create up to 5,000 jobs for Ras al Khaimah.

What is different about RAKMC?

RAK Maritime City is the second free zone in Ras al Khaimah, an emirate with scarce oil and gas holdings which was created by Emiri Decree in December 2009. The Decree has also mentioned that clear boundary of RAK maritime city.As a result, the emirate has long relied on other resources such as quarries to build up a cumulative trading business and cement factories. Maritime City will be a tremendous economic booster for RAK as it encourages foreign expats to establish their corporations with Free Zone privileges. Maritime city seeks to attract businesses as a "one-stop shop" with the benefits of a free zone environment, state of the art, 21st-century harbor infrastructure within a developed and established aport. It aims to provide a cost-efficient and highly safe environment for its tenants, as well as quality industrial and maritime facilities, superior logistics and high-quality amenities.

The construction of RAK Maritime City is a critical component of the Emirate's economic roadmap to build an advanced ports' network in RAK. This aspect will empower the emirate to get recognized as significant shipping and freight center that will be able to compete on the global level as a significant logistics and trans-shipment hub in the Gulf. RAK Maritime City gets zoned into areas for specified use like retail, warehousing, general cargo handling, industrial production and manufacturing, tank storage and shipbuilding or repairs. RAK Ports, managed by Saqr Port Authority, has been given the responsibility to oversee the growth of the maritime industry in the region and drive the economic development of Ras AlKhaimah.

RAK Maritime City Free Zone supports through every step of the process for the establishment of the corporation from the initial application, company registration, facility leasing, the securing of licenses, permits and residence and more to launch the business with ease and within the legal framework of FZA and the respected Emirate. Today each of the five ports in the Emirate has a defined role, specializing in a shipping or transport role, that matches the Emirate's ambitions to get recognized as a modern maritime hub. RAK Maritime City company connects all the businesses in the company to a large area of million square meters. The free zone currently accommodates thousands of firms with different scales which belongs to different sectors.

The following table is for the investors willing to establish the company in RAK Maritime City, the table provide the list of documents required for different types of company to be registered in the free zone: 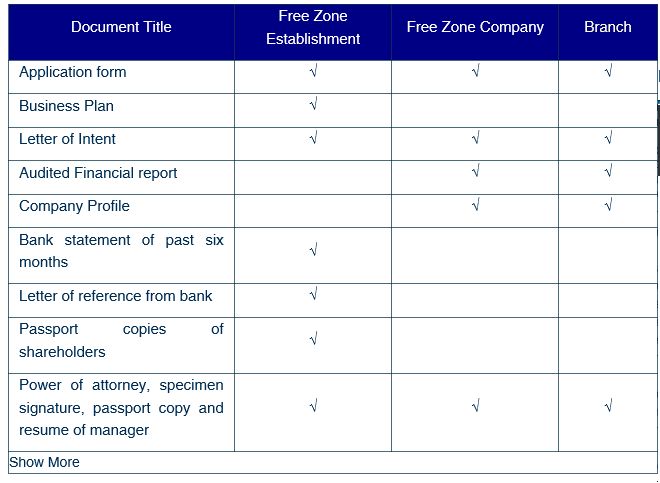