India: On A Sticky Wicket: A Point Of View On Understanding The Impact Of The Proposed Prevention Of Sporting Fraud Bill, 2013

Timing is everything when it comes to sports. This couldn't be more true, as the Government of India is set to discuss the Prevention of Sporting Fraud Bill, 2013 ("the Bill") in the Indian Parliament, in a bid to curb issues such as match fixing that have brought much embarrassment to the sporting community in India.

Match fixing is a global concern and has been described as the biggest threat to sport in the 21st Century1..Match-fixing per se is not new to India, with such incidents being brought to public attention as early as the 1990s. However, the increasing frequency, involvement of corporates and large amounts of money in match fixing in recent times have made it a national sporting menace.

By introducing the Bill, India is likely to become the first country to have a distinct legislation for sports fraud related to match fixing.2 3 The table below highlights key aspects of the Bill. 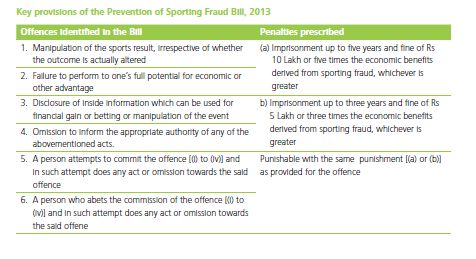 With respect to offences committed by companies, every person who, at the time when the offence was committed, was in charge of and was responsible to the company shall be deemed to be guilty of the offence and shall be punished accordingly. Further, if any offence is similar to those for which an individual is liable (see table- i-iv) and is committed by a company, all persons, including any director, manager, secretary, or other officer of the company, due to whose consent or involvement or neglect such offence has occurred shall be deemed to be guilty and punished accordingly.

The Bill does not have any retrospective implications and may not impact past offenders including those currently under scrutiny for betting and spot-fixing4.

It should also be noted that on the face of it the Bill appears to suggest that for such company representatives (as mentioned above) to be held liable the 'company' itself should commit the fraud i.e., it will not be sufficient to convict the representatives of a company if the fraud is committed by a player or coach or agent of the team owned by the company. Thus, the onus in such cases would fall on the government to prove that the fraudulent act was undertaken or given consent to by the company as a whole, which may be daunting.

Impact of the Prevention of Sporting Fraud Bill, 2013 on Corporates

Considering the Bill specifically indicates the liability for organizations in light of the offences, companies who sponsor or own sporting teams (not limited to just cricket) need to re-evaluate their fraud risk management program. This is further covered by Section 134 of the Companies Act, 2013, which mandates that the Board of Directors must report the development and implementation of a fraud risk management policy. To do so, they must start by realistically assessing the fraud risks they can potentially face.

Corporates owning sports teams may usually be impacted by some of the following types of fraud, non-compliance and reputational risks5

Often, given the dependence on players for game related outcomes as well as publicity, measures taken to mitigate the above mentioned fraud risks are primarily aimed at players. Players are given access to professionals such as strategists, image consultants, lawyers, financial experts and medical experts, who can manage their sporting careers and public image. However, there are limited efforts by sporting organizations to develop a comprehensive fraud risk / noncompliance management program that extends beyond players.

In light of the provisions of the Bill, organizations may now have to undertake more comprehensive measures such as the following6-

Until now, some of these measures may have been undertaken by companies voluntarily. However, with the introduction of the Bill, it may become necessary for all companies operating in the sports management area to identify key fraud risks and introduce specific measures to mitigate them.

2 At present individuals (who are not public servants) deemed guilty for match-fixing are prosecuted under the Indian Penal Code for cheating and criminal conspiracy. (Source: http://sports.ndtv.com/indian-premier-league-2013/news/208080-spot-and-match-fixing-to-be-criminal-offence-under-new-law-kapil-sibal) (http://www.legalserviceindia.com/articles/social.htm).

3 The UK has incorporated relevant clauses in the British Gambling Act, 2005, their Criminal Law Act, 1977 and their Prevention of Corruption Act, 1906. Similarly in the United States, at a Federal level incorporates the relevant provisions in Chapter 18 (Crimes and Criminal Procedure) of the United States Code, 2006.  (Source: http://www.unodc.org/documents/corruption/Publications/2013/Criminalization_approaches_to_combat_match-fixing.pdf)