India: Patents Law In India - Everything You Must Know

The history of Patent law in India starts from 1911 when the Indian Patents and Designs Act, 1911 was enacted. The present Patents Act, 1970 came into force in the year 1972, amending and consolidating the existing law relating to Patents in India. The Patents Act, 1970 was again amended by the Patents (Amendment) Act, 2005, wherein product patent was extended to all fields of technology including food, drugs, chemicals and micro-organisms. After the amendment, the provisions relating to Exclusive Marketing Rights (EMRs) have been repealed, and a provision for enabling grant of compulsory license has been introduced. The provisions relating to pre-grant and post-grant opposition have been also introduced.

An invention relating to a product or a process that is new, involving inventive step and capable of industrial application can be patented in India. However, it must not fall into the category of inventions that are non-patentable as provided under sections 3 and 4 of the (Indian) Patents Act, 1970. In India, a patent application can be filed, either alone or jointly, by true and first inventor or his assignee. 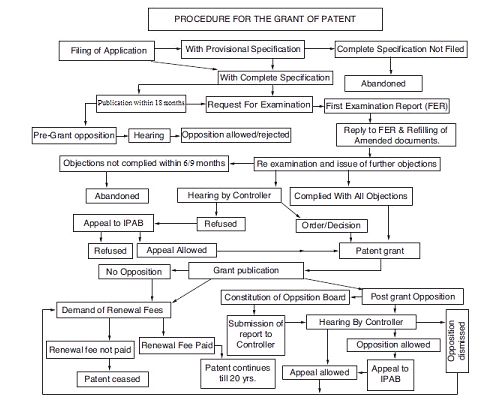 India being a signatory to the Paris Convention for the Protection of Industrial Property, 1883 and the Patent Cooperation Treaty (PCT), 1970, a foreign entity can adopt any of the aforesaid treaties for filing of application for grant of patent in India.

(c) The invention was publicly known or publicly used in India before the priority date of that claim;

(d) The invention is obvious and does not involve any inventive step;

(e) That the subject of any claim is not an invention within the meaning of this Act, or is not patentable under this Act;

(f) Insufficient disclosure of the invention or the method by which it is to be performed;

(h) That the complete specification does not disclose or wrongly mentions the source and geographical origin of biological material used for the invention; and

(i) That the invention was anticipated having regard to the knowledge, oral or otherwise, available within any local or indigenous community in India or elsewhere.

The term of every patent in India is 20 years from the date of filing the patent application, irrespective of whether it is filed with provisional or complete specification. However, in case of applications filed under the Patent Cooperative Treaty (PCT), the term of 20 years begins from the international filing date.

If the invention uses a biological material which is new, it is essential to deposit the same in the International Depository Authority (IDA) prior to the filing of the application in India in order to supplement the description. If such biological materials are already known, in such a case it is not essential to deposit the same. The IDA in India located at Chandigarh is known as Institute of Microbial Technology (IMTECH).

Rights granted by a Patent

Before filing an application for grant of patent in India, it is important to note "What is not Patentable in India?" Any invention which is (a) frivolous, (b) obvious, (c) contrary to well established natural laws, (d) contrary to law, (e) morality, (f) injurious to public health, (g) a mere discovery of a scientific principle, (h) the formulation of an abstract theory, (i) a mere discovery of any new property or new use for a known substance or process, machine or apparatus, (j) a substance obtained by a mere admixture resulting only in the aggregation of the properties of the components thereof or a process for producing such substance, (k) a mere arrangement or rearrangement or duplication of known devices, (l) a method of agriculture or horticulture and (m) inventions relating to atomic energy, are not patentable in India.

It is further important to note that an application for compulsory licensing may be made by any person notwithstanding that he is already the holder of a licence under the patent.

The Government of India has while exercising its power under section 66 of the Patents Act, 1970 in the Public Interest, revoked Patent No. 252093, entitled "a synergistic, ayurvedic functional food bioactive composition (Cinata) and a process of preparation thereof" granted to m/s Avesthagen Ltd., on the ground that the aforesaid patent is prejudicial to public.

Patent infringement proceedings can only be initiated after grant of patent in India but may include a claim retrospectively from the date of publication of the application for grant of the patent. Infringement of a patent consists of the unauthorised making, importing, using, offering for sale or selling any patented invention within the India. Under the (Indian) Patents Act, 1970 only a civil action can be initiated in a Court of Law. Further, a suit for infringement can be defended on various grounds including the grounds on which a patent cannot be granted in India and based on such defence, revocation of Patent can also be claimed.

Licensing and Assignment of Patent

An assignment in a patent or a share in a patent or a mortgage, license or the creation of any other interest in a patent is permissible. In the case of patents, assignment is valid only when it is in writing and the agreement is reduced to the form of a document embodying all the terms and conditions governing the rights and obligations of the parties to the agreement. The application for registration is required to be made by the transferee in the prescribed form.