India: Restriction On The Number Of Layers Of Subsidiaries

by Kartik Ganapathy , Kriti Bhatia and Sanjana Ramkumar
IndusLaw
Your LinkedIn Connections
with the authors

The Ministry of Corporate Affairs notified the Companies (Restriction on Number of Layers) Rules, 2017 (the "Rules") on September 20, 2017. The Rules have been issued pursuant to Section 2 (87) of the Companies Act, 2013 (the "Act"), which provides the Central Government the power to cap the number of layers of subsidiaries that a company may have.

The definition of 'subsidiaries' under the Act is in line with the concept of 'control' under the SEBI (Substantial Acquisition of Shares and Takeovers) Regulations, 2011.

The following classes of companies are specifically exempted from the restriction on the number of layers:

In this context, it must be noted that the Rules apply to body corporates, which include companies incorporated outside India. Hence, the Rules can be read to say that a company outside India cannot have more than 2 (two) layers of subsidiaries in India as well.

For the purpose of computing the number of layers under the Rules, one layer which consists of one or more wholly owned subsidiaries does not need be to taken into account. 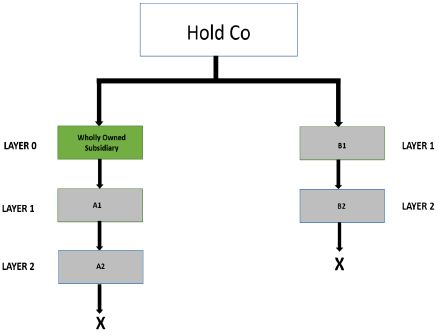 As explained in the above structure, a layer consisting of a wholly owned subsidiary is not taken into account for the purpose of calculating the number of permissible layers. Although the language in the Rules is slightly ambiguous, the language could be interpreted to mean that the exception works vertically, and not horizontally.

To illustrate, in the structure above, B1 will be considered to be a layer, although the Wholly Owned Subsidiary is at the same level as B1.

Section 186 (1) of the Act prescribes that a company is prohibited from making investments through more than 2 (two) layers of investment companies. The proviso to Section 186(1) exempts the following companies from the restriction:

The Rules clarify that they are not in derogation of the exceptions to Section 186 (1) of the Act.

The Rules are prospective in nature. They have to be complied with from September 20, 2017. If any company has more than 2 (two) existing layers of subsidiaries, it is required to file Form CRL-1 with the Registrar of Companies to disclose the details of the layers of subsidiaries. This filing is to be made within 150 (one hundred and fifty) days from September 20, 2017. The filing does not preclude a company from complying with the Rules prospectively with respect to any new subsidiaries acquired or created by them.

The restriction on the number of layers of subsidiaries was intended to clamp down on companies that are (or were) involved in illicit funding activities through shell companies. The restriction was a reaction to various scams that came to light in the time immediately preceding the Act. The reporting requirement will also provide the government with a database of all companies that possess more than 2 (two) layers of subsidiaries.

However, the Rules seem to be fairly restrictive, with the potential to impair the operational flexibility of companies to structure their group companies for strategic reasons. Since the definition of 'subsidiaries' is quite wide, corporate restructuring may prove to be challenging.

The ambiguity created by the overly broad definitions and loosely worded Rules is sure to cause an interpretative quandary. For example, in the structure outlined in Paragraph 3 above, if the board of A1 is controlled by B2, A1 will be a subsidiary of B2. This could make A1 a third layer of subsidiary of the Hold Co, though each chain of holdings as illustrated would seem to also seem to be consonant with the wording of the Rules.

With the enactment of the Rules, structuring transactions and holdings just got more complicated and interesting. We will wait to see how the interpretation of the Rules evolves in practice, and update our readers as issues develop and find resolution.

ARTICLE TAGS
India Corporate/Commercial Law Corporate and Company Law
POPULAR ARTICLES ON: Corporate/Commercial Law from India
The Limited Liability Partnership (Amendment) Act, 2021
Lumiere Law Partners
The Amendment Act was passed in the Rajya Sabha on 04 August 2021 and in the Lok Sabha on 09 August 2021.
Some Recent Trends In Oppression & Mismanagement Cases Under The Companies Act, 2013
Factum Law
The provisions regulating oppression and mismanagement in companies are an integral part of corporate governance. They ensure that interests of a company are protected and that no shareholder or...
Clean Slate Principle Re-Affirmed By The Hon'ble Supreme Court, ‘Inter Alia'
K Law
The Hon'ble Supreme Court, in its recent landmark judgment of Ghanashyam Mishra & Sons Pvt Ltd vs. Edelweiss Asset Reconstruction Company Limited, has settled the legal position on various issues arising under ...
Exclusive Jurisdiction Clause In Contracts
Upscale Legal
The law relating to ‘Contracts' in India is dealt under the Indian Contract Act, 1872. The Contracts/ Agreements can be with respect to an individual working at an organization...
Intricacies Involving Termination Of A Contract Without Adhering With The Due Procedure
Singh & Associates
Termination of contract is considered to be lawful when a legitimate reason exists to end the contract before performance has been completed.
Governance Of AIFs: In Contrast With Corporate Governance
Nishith Desai Associates
Alternative Investment Funds are primarily instituted as private trusts in India, even though the Securities and Exchange Board of India allows an AIF to be instituted as a company, a limited liability partnership, …
FREE News Alerts
Sign Up for our free News Alerts - All the latest articles on your chosen topics condensed into a free bi-weekly email.
Register For News Alerts
Article Tags
India Corporate/Commercial Law Corporate and Company Law
Related Articles
Related Party Transactions Put Under Tighter Scrutiny | Co-Investment Through Portfolio Managers Notified By SEBI Economic Laws Practice
Changes In The Regulatory Framework For Related Party Transactions, Scheme Of Arrangement By Listed Companies And Alternative Investment Funds Economic Laws Practice
SEBI's ICDR Amendment: A Welcome change (but some additional clarifications would be welcome too!) Economic Laws Practice
SEBI Tightens Governance And Disclosure Requirements For Related Party Transactions Khaitan & Co
Disclosure Of An Indian Issuer's Potential FCPA Violations: The Implications For Other Indian Companies IndusLaw
Mondaq Webinars
What Can Be Achieved in Luxembourg in Terms of Securing Assets in Pre-Trial, Pre-Enforcement Situations?
Bonn Steichen & Partners
Webinar Luxembourg Luxembourg
Hot Topics in Fund Finance [REPLAY]
Cadwalader, Wickersham & Taft LLP
Webinar New York United States
More Webinars
Comparative Guides
Alternative Investment Funds
Artificial Intelligence
Aviation Finance
Aviation Regulation
Blockchain
More Guides
Mondaq Advice Centres
India
Trademarks
India
Arbitration, Litigation and Conciliation
India
Insolvency
Global
Trademarks in SAARC Countries
More MACs