The benefits of Guernsey as a fund domicile.

Guernsey is one of the world's largest offshore finance centres, with a thriving funds industry. Over 1,400 investment funds and sub-funds are currently administered in the island. The value of funds under management and administration in Guernsey as at the end of June 2021 is US$533 billion (up 24.4% in 12 months), based on the most recent available data published in The 27th annual Monterey Insight Guernsey Fund Report.

But what are the reasons for this? And what are the advantages of establishing a fund in Guernsey when compared to other jurisdictions?

As the leading legal adviser to Guernsey's investment funds sector by both number of funds advised and by assets. We believe that the following reasons help to explain Guernsey's success and provide strong arguments for choosing Guernsey.

This engagement has given Guernsey a strong track record in innovation, having created the "protected cell company" now 25 years ago (now copied globally).

Guernsey maintains a proportionate, flexible and competitive funds regulatory regime, adopting a risk based approach to ensure that appropriate levels of investor protection are maintained, whilst at the same time avoiding unnecessarily complex or burdensome regulation (or granting waivers of certain regulatory requirements where considered appropriate).

Simplicity is also key: Guernsey fundamentally has only two fund types – registered or authorised – each of which has a small number of classes, aimed at various types of investors.

Guernsey's financial services regulator, the Guernsey Financial Services Commission ("GFSC") works closely with the funds industry to ensure that the regulatory regime continues to evolve and provide the kinds of structures required by today's investors. There is ongoing engagement between the GFSC and industry experts to further the island's interests.

This engagement has given Guernsey a strong track record in innovation, having created the "protected cell company" over 20 years ago (now copied globally). More recently, the "Private Investment Fund" ("PIF") regime was launched, providing a fund class specifically designed to reflect the often close relationship between fund managers and their investors.

The close relationship between the GFSC and Guernsey's funds industry also ensures a high level of responsiveness. Fund vehicles can be established on a same-day basis and regulatory approval times can be as little as one day.

In approving a Guernsey fund, the GFSC is also willing to take a practical approach in determining the suitability of prospective managers: where they are based in other jurisdictions, the GFSC will (depending upon the jurisdiction) take such authorisations into account (although such authorisation is not in itself sufficient; a demonstrable track record in the promotion and management of funds is required).

THE POLITICAL AND LEGAL REGIME

Guernsey is politically and fiscally autonomous, with a stable political and legal structure. Though originating from Norman customary law, nowadays Guernsey law has adopted many principles of English common law and equity. The principle of the right of contracting parties to agree a deal between themselves is upheld and legal redress can be sought through a reliable judicial system, with ultimate appeal to the Privy Council in England.

The legislation governing Guernsey companies, limited partnerships and trusts provides flexible regimes to facilitate the establishment and operation of these vehicles.

For example, Guernsey companies can make distributions of capital to investors based on simple solvency tests, whilst Guernsey limited partnerships are able to elect to have their own separate legal personality, and have specified "safe harbours" to avoid limited partners losing their limited liability status by conducting the management of the partnership.

Guernsey provides an uncontroversial tax neutral environment for funds and fund managers. Funds structured as limited partnerships are tax transparent in Guernsey. Funds structured as companies or unit trusts may apply for an annual exemption from income tax, subject to meeting certain criteria. The exemption is subject to payment of an annual fee currently fixed at £1,200. In the absence of such exemption, such entities are subject to income tax at the rate of 0%.

Income from the provision of investment management services to collective investment schemes in Guernsey is subject to income tax at 0%. Guernsey does not levy any form of VAT, and so management fees charged or transaction/deal costs incurred by a Guernsey manager do not suffer any VAT leakage.

Guernsey does not levy any form of capital gains tax or inheritance tax. No stamp or document duty, or transfer tax, is payable in respect of companies, unit trusts or limited partnerships that are funds.

At Carey Olsen, our lawyers understand the requirements and priorities of each interest group and tailor our services accordingly. We have a collective depth and breadth of knowledge and experience unrivalled in Guernsey, and remain abreast of the latest developments and trends, working closely with leading onshore counsel to advise many of the world's most successful fund managers. Carey Olsen's funds lawyers have in many cases previously worked in major international onshore law firms and have extensive experience of delivering for clients as both lead onshore and lead offshore counsel.

Guernsey also benefits from a number of experienced independent non-executive directors to provide guidance and oversight to funds and to ensure that the highest standards of corporate governance are observed.

Located in the English Channel, Guernsey is in the same time zone as the UK and (as an English-speaking Crown Dependency) has strong links with the UK government and the UK funds industry, and benefits from excellent transport links with the UK.

Carey Olsen also has several Guernsey funds practitioners based permanently in its offices in the heart of the City of London and Singapore (with the latter supported by in-house native-Chinese speakers).

Guernsey funds also boast a broad international appeal and familiarity. Guernsey funds are promoted or sponsored in more than 55 jurisdictions globally, and are well known to the market worldwide. Guernsey is a tried and tested fund domicile for investors from all key global markets (North America, UK, Asia, Middle East, South Africa, Switzerland and continental EU).

Or, rather, the lack of it. Guernsey is neither a member nor an associate member of the European Union (the "EU") and as such is classified as a third-country. The AIFMD therefore has no application to Guernsey funds or fund managers when they are not marketed into the EU.

Guernsey funds continue to raise significant amounts of capital from EU based investors by utilising national private placement regimes. These are now thoroughly tried and tested routes to market which typically require only partial adherence to the provisions of the AIFMD2 (the reporting and disclosure requirements of Articles 22-24 and (where control is acquired of an unlisted company) the notifications requirements of Articles 26-20) which can result in lower running costs and consequently higher investor returns.

In addition, with Guernsey having been given an "unqualified and positive assessment" by ESMA3, Guernsey funds are best placed to benefit from the full passporting regime once activated (although this will require the fund's manager to opt into the full AIFMD regime).

Thus although marketing into the EU brings with it a requirement to adhere to some or all of the AIFMD, this is entirely optional. A fund manager may wish to steer clear of the EU entirely and will thus avoid all of the (arguably unnecessarily burdensome and costly) requirements of the AIFMD, including:

Guernsey adheres to the highest standards of international tax and regulatory principles and is committed to ensuring that this continues.

Guernsey has given its full support for the transparency principles central to the current G20, OECD and EU tax initiatives and is working as part of the wider international community in the development and effective implementation of internationally agreed standards, including those set by the Financial Action Task Force ("FATF") and the Organisation for Economic Co-operation and Development.

Guernsey has been assessed as being amongst the best quality financial centres in the world when measured against the rigorous international standards for tackling money laundering and terrorist financing set by the FATF.

Guernsey also participates fully in numerous international initiatives such as the OECD's base erosion and profit shifting project and developing the global "Common Reporting Standard" and the automatic exchange of information between tax authorities.

We believe that the attractiveness of Guernsey as a funds domicile is borne out by the market data as described in the 27th Monterey Insight Guernsey Fund Report. Of Guernsey's funds under management and administration, Private Equity/Venture Capital funds remain the most popular product of serviced funds with a net asset value of US$388.4 billion (72% of the total assets under management and administration on the island), followed by Alternative Investment with US$60.8 billion. During the 12 months to 30 June 2021, over 90 new groups and sub-funds were launched and gained $24.4 billion of assets, of which US$22.2 billion were private equity/venture capital products. In addition, over 90 serviced funds and sub-funds migrated to the island during this period.

Among fund managers, Apax Partners retain their top position of the largest promoter/initiator of serviced funds in Guernsey with US$53 billion of assets under management. Permira with US$43.5 billion and Cinven with US$29.9 billion. Please refer to Annex 1 for a list of some other well-known fund managers using Guernsey as a funds domicile. 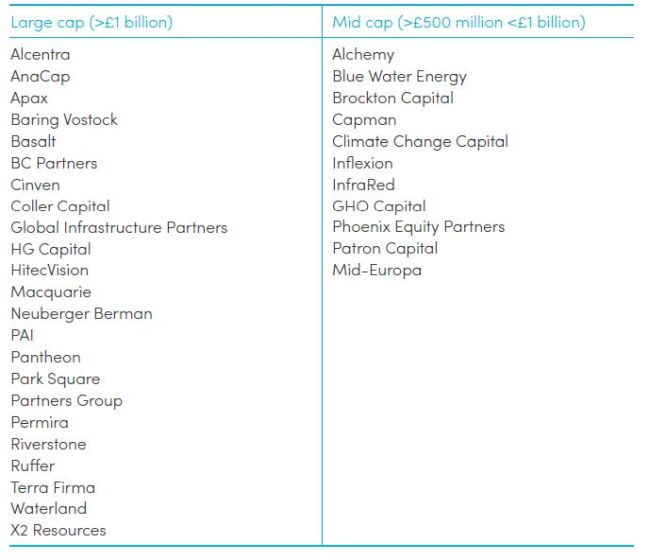 3. The European Securities and Markets Authority.

ARTICLE TAGS
Guernsey Finance and Banking Financial Services Fund Management/ REITs
POPULAR ARTICLES ON: Finance and Banking from Guernsey
BVI Regulatory Obligations And Filing Deadlines 2017
Maples Group
During the past year we have seen that the British Virgin Islands ("BVI") Financial Services Commission (the "Commission") has become increasingly strict with payment and filing deadline...
The Applicability Of Regulation (EU) No 1286/2014 On PRIIPs KID To Funds And Fund Managers
Finance Malta
On 22nd December 2022, the Malta Financial Services Authority (the "MFSA") issued a circular on the applicability of Regulation (EU) No 1286/2014 (the "Regulation") on Key Information Documents...
Green Loans
Camilleri Preziosi Advocates
The term ‘green loan' has become increasingly omnipresent in economic and market discourse. What is a ‘green loan' and what distinguishes it from your typical ‘loan'?
A Legal Notice 199 Of 2021
CSB Group
A Legal Notice (L.N. 199 of 2021) was published on the 30th April 2021 providing a number of amendments to the principal regulations, the Prevention of Money Laundering and Funding
What Is Culture And What Does It Mean?
Baker & Partners
The Wolf of Wall Street film or the Netflix series on Bernie Madoff provide entertaining and graphic examples of where culture and conduct spiral out of control leaving devastated employees...
CRS Obligations For Investment Managers And Advisers
BeesMont Law Limited
Generally, under the Common Reporting Standard (CRS) investment managers and advisers are classified as ‘Investment Entities' and are ‘Reporting Financial Institutions' for CRS purposes.
FREE News Alerts
Sign Up for our free News Alerts - All the latest articles on your chosen topics condensed into a free bi-weekly email.
Register For News Alerts
Article Tags
Guernsey Finance and Banking Financial Services Fund Management/ REITs
Related Articles
Global Finance Professionals Are Invited To Join Guernsey Alumni GuernseyFinance
Assessing Lender Risk In Fund Finance Markets Carey Olsen
Fund Finance Laws And Regulations 2023 – Guernsey Appleby
COP15 And The Bailiwick GuernseyFinance
Investing Into Africa – Efficient Route To Market Using A Guernsey/South African Structure Dixcart Group Limited
Mondaq Webinars
Considering the Nigerian Start-Up Act & The Opportunities for Tech
Oake Legal
A Guide for Business and Investors – The Sleeping Giant; Why is Nigeria the New Emerging Market for Global Business
Threshing Fields Law Practice
More Webinars
Comparative Guides
Alternative Investment Funds
Immigration
Insurance
Restructuring & Insolvency
More Guides
Mondaq Advice Centres
Global
Trademarks in SAARC Countries
More MACs
Upcoming Events
Mondaq Social Media