The Concept sets out a standardized approach regarding the calculation of administrative fines in accordance with article 83(4) and (5) of the General Data Protection Regulation (GDPR) and also takes into account the circumstances of the individual case as described in article 83(2) GDPR. The Concept provides a uniform determination of administrative fines under GDPR without losing the flexibility to consider the individual case and situation of the violating person or organization (Violating Entity).

The Concept is not binding on courts, non-German authorities, or the European Data Protection Board (EDPB) and shall only be used for violations in Germany that are not cross-border cases. The Concept shall only be used until the EDPB has issued its own guidelines for the determination of fines under article 83 GDPR. In addition, the Concept shall not be used for fining associations or natural person outside of their economic activity.

In this blog, we explain the five-step procedure that the DSK applies in the calculation:

The procedure for determining GDPR fines described in the Concept comprises five steps: 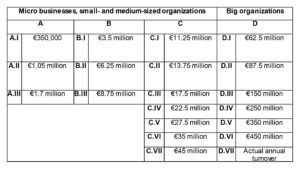 In the third step, the supervisory authorities determine a daily rate by dividing the annual average turnover by 360 days as a basis for the calculation of the actual fine.

In the fourth step, the GDPR violation will be categorized into one of four degrees of severity (low, medium, serious, or very serious), taking into account all factors and circumstances of the individual case as set out in article 83(2) GDPR.

Each degree of severity contains several multipliers that are applied to the daily rates determined in the Step 3.

Fifth, the amount determined in Step 4 will be adjusted in accordance with article 83(2) GDPR but also taking into account other circumstances, such as very long proceedings or impending insolvency of the Violating Entity.

The Concept is a paradigm shift with regard to administrative fines for data protection violations. Until a few months ago, and even under "old" data protection law, Germany was a safe haven since administrative fines were not high (only ranging up to €200,000). Under the Concept, fines will now increase significantly. For example, the Berlin Data Protection Authority recently announced that it is preparing a fine in the double-digit million amount of euros (more on our blog).

At first glance, the Concept seems to be reasonable, particularly with regard to smaller Violating Entities. However, the Concept does not provide for a multiplier smaller than 1. This leads to bigger organizations facing high fines even in minor cases. The minimum fine for a medium-sized organization in a minor incident with an annual turnover of €45 million to €50 million is now €125,000. For a bigger organization with a turnover of €450 million, it is already €1.25 million.

It is questionable whether the annual turnover of the group of undertakings is the correct scale. According to recital 150 GDPR, the definition of the term "undertaking" in article 83(4) and (5) GDPR is to be based on the concept of an undertaking as defined in competition law (articles 101 and 102 TFEU), which is interpreted very broadly (that is, it includes associated companies)

It is not clear if the German DPAs even have the competency to create the Concept. Article 70(1)(k) GDPR provides that it is the task of the EPDB – not the national supervisory authorities – to draw up guidelines for supervisory authorities concerning the setting of administrative fines under article 83 GDPR. The aim of this provision is to harmonize the application of the GDPR across all member states. However, if the member states develop different fine concepts, this goal will not be reached. The DSK has recognized this issue and has limited the scope to Germany and set the Concept under the condition that the EDPB must decide in accordance with article 70(1)(k) GDPR. However, it has to be asked whether a national solo run with the annual turnover as the primary scale was necessary or if an entry to the EDPB without using the Concept on a national level would not have been the better approach.

The EDPB are in a continuous process to streamline the enforcement of the GDPR on an EU level, which started with EDPB's opinion WP253, where the EDPB said that this is an evolving process. Germany now has provided a blueprint for a unified approach. If the EDPB adopts the Concept, high fines across Europe would be standard.