Finance Minister Ken Ofori-Atta read the Akufo-Addo government's sixth annual budget in parliament yesterday. It takes place amid severe economic pressure, highlighted in his statement, and unprecedented demands for him to leave his post. In getting to this point, the New Patriotic Party (NPP) administration has engaged with several questions highlighted in our recent analyses. See: Ghana's battle lines (November 2022) Songhai Advisory and Ghana's hard yards (November 2022). Songhai Advisory. Still more questions loom ahead. And they are weightiest.

The fifth question could be rephrased as – Does the government 'get it'? – It being the portion of its woes that come from internal missteps rather than the volatile external environment. And what does it plan to do about it? On that front, there has been some movement. But more is needed, and God is in the detail.

Government has accepted that "Ghana is now considered to be in high risk of debt distress" and that the IMF is the only game in town. Credit rating downgrades over the course of the year are now traced to "what started as a political disagreement over revenue measures...that undermined the credibility of our budget" rather than unfairness and incompetence of the rating agencies. See: Ghana's credit rating moment (February 2022. Songhai Advisory). There was also a more full-throated thanks to parliament including, even particularly, the opposition NDC than you will find in any of the preceding 2017-2022 budgets. 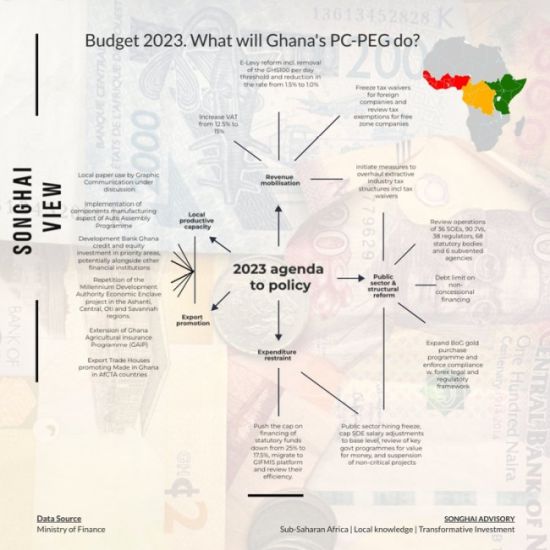 And against this backdrop, the government has premised its Post-COVID-19 Programme for Economic Growth (PC-PEG) on a seven-point agenda that includes: (i) aggressive domestic revenue mobilisation, (ii) expenditure rationalisation, (iii) public sector and structural reforms, (iv) improving local productivity, (v) export promotion/diversification, (vi) digital and climate-responsive physical infrastructure development, as well as (vii) protection of the most vulnerable. Key measures associated with the plan are mapped below.

In his statement, the finance minister pledges 'an equitable debt operation programme' and on the radio waves his deputy John Kumah has said there may be a 'haircut' of up to 30% on the principal for foreign. Three weeks prior, President Nana Addo Dankwa Akufo Addo said no such thing can happen. Between these three positions is too much space for confusion.

Unfortunately, despite the improvement in tone, this creates a situation wherein we can almost copy and paste conclusions from our analysis at the start of the month. Namely, that this most recent policy statement "captures something of the difficulty the government has had delivering a coherent, compelling and sustainable message to its constituents at home and abroad... The pledge that there will be no haircuts without explaining how or why assumes a level of trust and goodwill that no longer exists. Not even within the ruling party itself".

The bill will be debated next week.