We have prepared this bulletin for our clients and colleagues who work with us in the Norwegian ship finance and shipping capital markets space. Norway continues to be of importance to our transaction focused corporate practice, a foundation of which is our extensive relationships with Norwegian law firms, defence clubs, corporates and financial institutions. We are committed to supporting and sustaining these relationships through the distribution of this bulletin and regular visits to Norway.

2016 was another challenging year for new financings and equity raises in the shipping sector. Accessing the equity capital markets - especially in the shipping area - remains challenging. Despite the relatively positive performance of the Oslo Børs, only one new IPO featured in 2016.

This reflected the global trend where new IPO issuers (-16%) and capital raised (-33%) declined significantly, compared to 2015. Our clients have instead focused on alternatives, including debt restructuring and private placements.

As we predicted last year, new issuances in the bond sector have been difficult for those other than established corporates, and additional capital has been sought from shareholders through rights offerings. Due to heavy exposure to oil and gas and oil service industries, Norwegian HYB issuers have shown extreme vulnerability to lower oil prices, especially among those with exposure to the capital-intensive offshore drilling sector.

Since the latter part of 2014, issuers have continued to work with banks and investors to "amend and extend" bond covenants. When time and investor patience runs out, more painful restructuring is the result and we have finally observed evidence of this trend.

The Bermuda Ship Registry achieved its long-stated ambition of restructuring as a quango, following record years for new vessel registrations in 2015 and 2016. The Registry is now better positioned to accommodate and service ship owners.

Our shipping work in Norway continues to account for approximately 30% of our Bermuda shipping practice. In line with previous years, vessel finance accounted for 45% of our Norway sourced work in 2016. New ship registrations continued the upward trend, setting yet another record from the previous year. The increase in restructuring work (referenced earlier in the bulletin) contributed to the significant increase in general corporate work to 45% (up from 32% in 2015). Capital markets work declined significantly (from 11% to 5%), which reflects the challenges of debt and equity capital markets for issuers in the shipping and oil and gas industries. 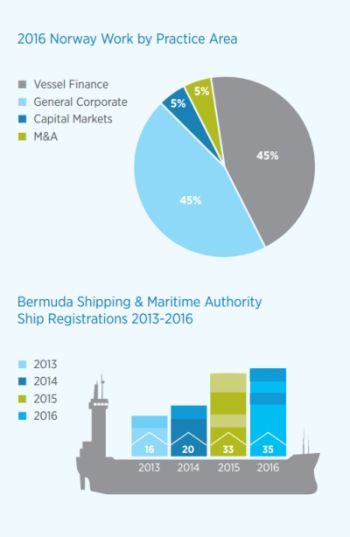 2016 was a watershed year for the Bermuda Ship Registry as the operations of the former Department of Maritime Administration were transferred into a new body, named the Bermuda Shipping and Maritime Authority. It now operates as a quasi-autonomous non-governmental organisation (or quango). The move to a quango has been in the works for many years and will provide a level of independence to Bermuda's ship registry and maritime authority. There were 35 new vessel registrations in 2016 (two more than the previous record of 33 set in 2015), the majority of which were handled by our shipping practice.

BERMUDA CORPORATE PRACTICE BY THE NUMBERS 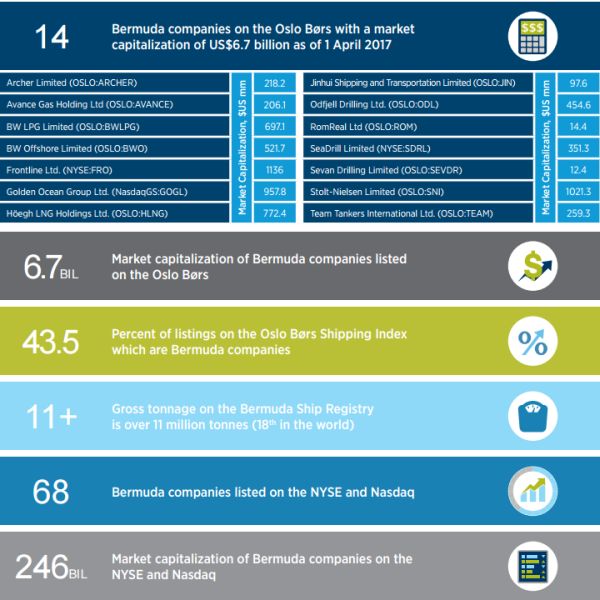 Conyers is acting for Nordic Trustee ASA on the restructuring by Golden Close Maritime Corp. Ltd. of its corporate bonds, consisting of US$400 million 9% senior secured callable bonds 2014/2019. Measures to enhance the company's liquidity include a PIK issuance and subsequent debt for equity swap in respect of accrued and unpaid interest; the issuance of new bonds to the drillship manager in return for a reduction of its fixed-fee and allocation of administration cost until the end of 2020 and a release of a US$5 million reserve on the operating accounts. More favourable borrowing terms will be put in place by the swapping of all but US$100 million of the remaining senior bonds for convertible bonds, which are coupon-free. Additional financing of up to US$50 million in super senior bonds in one or more tap issues, or up to US$20 million in borrowings to fund bid guarantees, will support the company's capital requirements.

Conyers advised BW Offshore Limited (OSLO:BWO) on the Bermuda law aspects of its restructuring, which implemented a new long-term financial platform for BWO. The new long-term financial platform is expected to contribute more than US$500 million in improved liquidity in the period through 2020 and thereby give the company a significant runway until an expected market recovery.

Conyers advised BW LPG Limited (OSLO:BWLPG) on the Bermuda law aspects of the company's voluntary exchange offer to acquire all the shares of Aurora LPG Holding ASA. The company's offer comprised either 0.3175 new common shares of BW LPG and NOK7.40 in cash, or NOK16.00 in cash, for each of the remaining Aurora LPG shares BW LPG did not already own. BW LPG has since acquired all of the shares of Aurora LPG, and delisted Aurora from the Oslo Axess.

GasLog Ltd. (NYSE:GLOG), an international owner, operator and manager of LNG carriers, returned to the capital markets once again in June 2016 with the issuance of NOK750 million senior unsecured bonds due in May 2021 with Nordic Trustee ASA as the bond trustee. Conyers advised GasLog on the bond issuance. This bond issuance follows from a previous bond offering in 2014.

ADVANCE GAS AMENDS US$450 MILLION AND US$200 MILLION FACILITIES

Conyers advised the agents, DNB Bank ASA and Nordea Bank Norge ASA respectively, in connection with the amendment of each of Avance Gas Holding Ltd's (OSLO:AVANCE) US$450 million and US$200 million facilities. The amendments provide for a 2.5 year period, which commenced 1 January 2017, and state that amortization payments, on both facilities, will be reduced by 50%, deferring a total of US$55 million of amortization payments over the period. Avance Gas also managed to raise the required US$55 million of new equity in October 2016.