Australia: Life insurance and genetic discrimination in a world of perfect data

With advances in the accuracy and availability of genetic testing, it is clear that genetic testing can be used by insurers to reduce their risk profile, in both predictive and diagnostic ways:

Conversely, they will also reduce the uncertainty for individual life insureds, who may question the utility of life insurance (other than accidental death cover), leading to a pool of adverse selected lives and profit deterioration.

There has been some debate about the use of genetic information in respect of human rights and discrimination.

The current law of the Commonwealth and in each state and territory exempts insurers from discrimination laws with respect to the terms on which an annuity, a life assurance policy, an accident or insurance policy or other policy of insurance is provided:

This exemption operates even if the genetic information gives rise to a disability or impairment within the meaning of the legislation.

In summary, genetic discrimination is not unlawful so long as it is justifiable in the circumstances.

The Joint Parliamentary Committee issued a report in March 2018 on, among other things, proposed reforms to the law of insurance. Chapter 9 dealt with approaches to the use of genetic information by life insurance companies.

By way of comparison, Chapter 9.18 of the report compares the position in respect of the use of genetic information by life insurance companies in EU countries and the US and Canada as follows: 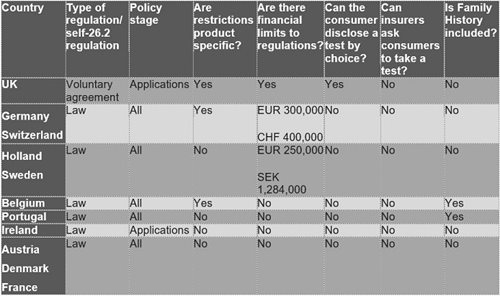 In Australia, the life insurance code of practice is mandatory for all members of the Financial Services Council (FSC).

The FSC is responsible for a self-regulatory regime and its life insurance code of practice (LifeCOP) contains a series of standards, the most relevant of which is standard 11, which as the Committee noted:

...specifies that insurers must not ask a consumer to undergo a genetic test. However, where an applicant has already undertaken a genetic test prior to the application process, insurance companies do have access to the results of such tests. ... (Report at 9.40)

The committee considered as a first step that the FSC should update the code and standard 11 to prohibit any life insurers from using the outcomes of predictive genetic tests at least in the medium term and should take a form similar to the United Kingdom's moratorium. This was incorporated in the June 2019 revision to the Standard by clause 3.2.

The Committee considers that the moratorium should be reviewed five years after being imposed.

However, similarly to the UK position, the Committee considered that the prohibition should not prevent a consumer from being able to provide genetic information to a life insurer in order to demonstrate that they are not at risk of developing an inherited condition (see Revised Standard 11 clause 3.5).

A life insurer may ask for results of a genetic test (but not that the applicant take a genetic test) where sums insured are high (clause 3.3) without breaching the standard. If the request is denied and the insurer declines cover then the insurer may have a defence under the discrimination legislation and will not have breached LifeCOP. Insurers must properly document their steps and evidence before rather than after any decision: Ingram v QBE Insurance (Australia) Ltd (Human Rights) [2015] VCAT 1936.

The report also makes other recommendations that speak to the interaction between discrimination law and insurance. The Committee recommended that an insurer must provide a person with written reasons when an application for insurance has been rejected or an insurance claim denied. Those reasons should be targeted to the part of a person's medical history relied on by the insurer in doing so.

The committee also recommended that the statistical and actuarial evidence relied on by the insurer be made available to the person on request. Currently, only the Disability Discrimination Commissioner can compel this.

There is a fine line between discriminating in favour of those who present genetic information to insurers to reduce premiums and the conversely higher premiums that are charged to those who do not do so. Some might try to argue that the latter are being used as a surrogate to discriminate against customers on the basis of genetic material (on the assumption that the failure to provide beneficial testing is functionally equivalent to having unhelpful genetic data).

A real question then arises as to whether having genetic material that predisposes someone to a condition should be a prohibited ground under Australian discrimination law.

Insurance is a product for a world of imperfect information, where the insured does not know when trouble will strike and the insurer gambles against the insured armed with statistics and a large pool to absorb loss.

We are moving into a world of perfect information, where those who have good genetic material, or have a good idea of their life expectancy based on genetic testing and lifestyle data, will choose not to purchase vanilla life insurance.

What effect that would have on the business of life insurance remains to be seen.