United States: A Look Under The Hood: Breaking Down DOJ's FY2018 Healthcare Recoveries

For all the headlines and law firm advisories that pore over the Department of Justice's (DOJ) annual False Claims Act (FCA) recovery statistics, that data only hints at big picture trends. DOJ doesn't explain where exactly the money came from, other than the few specific cases referenced in DOJ's accompanying press release. Fortunately, our blog tracks individually publicized recoveries by affected industry and sector—so you don't have to.

Take the healthcare and life sciences industry. DOJ reports recoveries for cases where Health and Human Services (HHS) was the "primary client agency." That's usually synonymous with what we call "healthcare cases"—but not always. So we track cases by identifying the affected industry and sector, rather than the affected agency. For example, the recoveries we track as "Healthcare: Provider" would include recoveries from providers where reimbursement claims were submitted only to TRICARE, even though DOJ's statistics would lump these under the Defense Department's FCA numbers. Ultimately, the difference between DOJ's "HHS" totals and our "healthcare" totals is negligible. As a result, our list of case-by-case healthcare recoveries reveals what DOJ's data doesn't: which sectors of the healthcare industry are getting hit hardest with FCA liability.

In FY2018, DOJ reported $2.5 billion in HHS recoveries (including settlements only announced after the fiscal year's end). For that same period, we were able to account for $2.41 billion derived from specific, publicly reported cases affecting the healthcare industry. By our count, more than $971 million—40 percent of all healthcare recoveries—came from cases involving healthcare providers, such as practitioners, hospitals, and managed care networks. This actually surpassed pharmaceutical-related recoveries, which we counted at $918 million in FY2018, down slightly from $954 million in FY2017 and $980 million in FY2016. 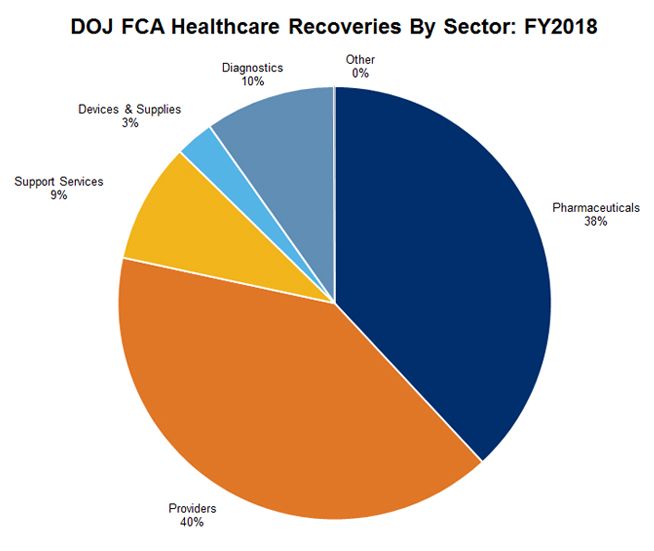 Of these provider recoveries, we count at least $143 million from cases involving individual medical practices and doctors (including podiatrists, psychiatrists, and dentists). That's more than DOJ recovered from every Defense Department-related settlement and judgment in FY2018. In fact, these recoveries involving individual doctors and practices are on a steady upward trend, from $81 million in FY2017 and only $44 million in FY2016: 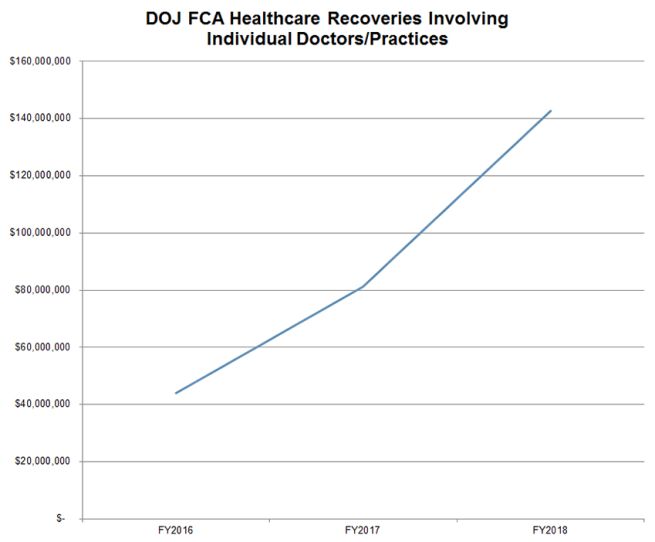 According to our numbers, the sharpest drop in recoveries came in cases involving medical devices and supplies: $69 million in FY2018, down from $400 million the year before and $380 million the year before that. There was also a dip in recoveries for cases involving medical support services (e.g., home health care, nursing homes, and ambulance services): $216 million, down from around $340 million in FY2017 and $296 million in FY2016. Another $235 million came from cases featuring diagnostics providers, such as laboratories and imaging companies, close to FY2016's $249 million after a notable dip in FY2017. 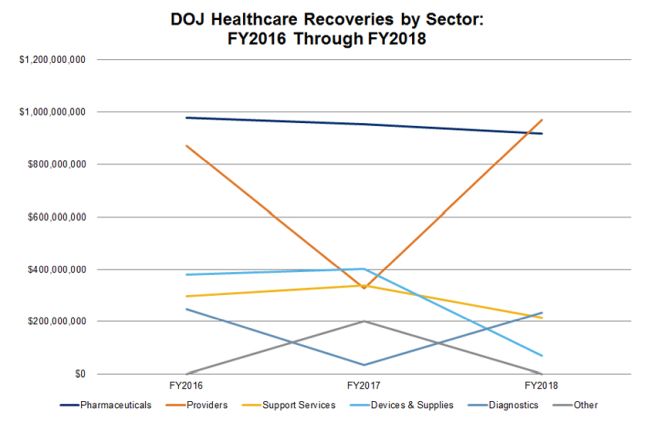 It's too early to tell what FY2019 holds for healthcare cases specifically. But in public comments released in January, DOJ's Deputy Associate Attorney General Stephen Cox confirmed that an ounce of prevention might be worth a pound of cure. He suggested that when investigating alleged Medicare/Medicaid overbilling, DOJ will pay special attention to whether the potential defendant has "an effective and robust compliance program in place," because this will inform whether DOJ views any billing issues "as a mistake or an anomaly," rather than "a knowing violation." Cox also reiterated the Brand Memo's policy that DOJ is "not going to use 'violations' of nonbinding guidance documents to establish a violation of law," and explained that DOJ will use its authority to dismiss qui tam cases "more consistently" to preserve DOJ's litigation-monitoring resources for higher priority cases. Even before the next DOJ data dump, our real-time recovery statistics should help shine a light on whether DOJ's professed restraint is more than just talk.