UK: The Letter Of The Law

Even black-letter law is not limited to words on a printed page: beneath and behind statutory language, values and principles which are often nowhere to be seen in the statute's text lie at the heart of the enacted law. A statute's silence, in this sense, does not stop it from speaking.

In 1882, Francis Palmer was poisoned. His killer: Elmer, his sixteen-year-old grandson, to whom he had left almost all of his New York estate. Elmer knew of the contents of his grandfather's will; he had been afraid that Palmer would change it, and wanted to find a way to enjoy, without any further delay, the property which in his view was rightfully his. Elmer was prosecuted, convicted, and imprisoned for his grandfather's murder: eventually, it fell to the Court of Appeals of New York in Riggs v Palmer 115 NY 506 (1889) to decide whether he should inherit the fortune.

The New York statute of wills said nothing explicit about whether a person named in a will could benefit from its provisions if he happened to have murdered the testator. Nevertheless, Earl J, giving the majority opinion in Palmer, distinguished 'the letter of the statute'  (its words) from 'the statute'  itself (the law it created). He concluded that it could not have been the legislator's intention for a will to operate in favour of someone who had killed in order to secure his ancestor's property: Elmer could not, therefore, inherit under its provisions. Earl J endorsed Matthew Bacon's 'equitable'  approach to construction (Abridgment, VI.385):

'In order to form a right judgment whether a case be within the equity of a statute, it is a good way to suppose the law-maker present, and that you have asked him this question, did you intend to comprehend this case? Then you must give yourself such answer as you imagine he, being an upright and reasonable man, would have given.'

Earl J warned that qui haeret in litera, haeret in cortice: clinging to the letter means clinging to the bark (going only skin-deep, never getting to the heart of the matter); he also argued that fundamental common law principles fell to be considered, since, as a matter of public policy, it would be an affront to justice to allow Elmer to profit from his own wrong (as volenti non fit injuria).

Gray J dissented: in his judgment, the statutory requirements for the execution, alteration and revocation of wills were 'strict and systematic'  and simply did not allow for 'considerations of an equitable nature'. Public policy did not in fact compel a different outcome, because 'the demands of public policy are satisfied by the proper execution of the laws and the punishment of crime'.

Ronald Dworkin considered these two divergent approaches in Law's Empire (1986). He pointed out that the disagreement in Riggs v Palmer was 'about what the law actually was, about what the statute required when properly read': Earl J did not contend that 'the law must be reformed in the interests of justice', and both judges appeared to agree that 'if the statute of wills, properly interpreted, gave the inheritance to Elmer, they must order the administrator to give it to him'. Dworkin explained the importance of recognising that the word 'statute'  was itself capable of bearing different meanings:

'It can describe a physical entity of a certain type, a document with words printed on it, the very words congressmen or members of Parliament had in front of them when they voted to enact the document. But it can also be used to describe the law created by enacting the document, which may be a much more complex matter.'

'The reason for the establishment of such rules, we may naturally assume, consists in the purpose to create those safeguards about these grave and important acts, which experience has demonstrated to be the wisest and surest ... The capacity and the power of the individual to dispose of his property after death, and the mode by which that power can be exercised, are matters of which the legislature has assumed the entire control, and has undertaken to regulate with comprehensive particularity.'

Ideas about value, as Riggs v Palmer  illustrates, lie at the heart of statutory construction: even if, as in Gray J's 'literal'  approach, they are not always easy to see.

'Ice cream is not meat': the Sunday Observance Act 1677

In England, the dangers of clinging to the letter (haeret in litera...) were recognised in Slater v Evans [1916] 2 KB 403, a case in which dictionary definitions shed very little light. In Slater, the Divisional Court had to decide whether ice cream was 'meat'  for the purposes of the Sunday Observance Act 1677 ('the 1677 Act').

On a midwinter Sunday evening in Aberavon, Slater the sailor emerged from Berni's sweetshop eating an ice cream. The headnote in Slater v Evans  fastidiously explains that the ice-cream wafer in his hands was 'composed of milk, sugar, eggs, and egg powder solidified by ice, sandwiched between two biscuits, and sold in that condition'. Slater, in due course, was aggrieved to find that he was convicted by the Aberavon justices of aiding and abetting Berni the shopkeeper in exercising 'any worldly labour, business, or work of their ordinary callings upon the Lord's Day', contrary to s. 1 of the 1677 Act (the selling of ice creams not constituting 'works of necessity and charity').

'... nothing in this Act contained shall extend to the prohibiting of dressing of meat in families, or dressing or selling of meat in inns, cooks' shops, or victualling houses, for such as otherwise cannot be provided'

The question of whether ice cream might fall within the saving in s. 3 had (perhaps remarkably) already been raised in Amorette v James [1915] 1 KB 124, although it had not been resolved. The authorities, Lord Coleridge CJ explained in Amorette, established that 'meat' was 'not confined to flesh'  and, in particular, that it could encompass potatoes; he went on magisterially to observe that in this context 'ice-cream'  presented a more difficult question than a 'mutton chop'. The justices had not, he said, been clear about the ice cream's ingredients, and he therefore reserved his opinion on the point. Shearman J's view, based both on the judgment in Bullen v Ward  (1905) 74 LJ (KB) 916 and the word's ordinary meaning, was that 'meat'  meant 'solid food', but he was similarly troubled by the court's ignorance of the ice cream's specific ingredients; he was also vexed by whether ice cream was closer to a solid or a liquid foodstuff. Horridge J, finally, was sceptical that ice cream could be 'meat'  at all – even if, as he accepted, potatoes could be.

In Slater, where the difficult question identified by Lord Coleridge CJ could no longer be avoided, Darling J was clear about the Divisional Court's task:

Scrutinising the dictionary meaning of 'meat'  could not by itself have disposed of the appeal: although Lord Coleridge CJ had observed in Amorette  that 'the secondary meaning of the word as given in the dictionary of Dr. Johnson shows that it implies food generally', he omitted to mention Johnson's first definition ('Flesh to be eaten'), which was restrictive just as the second was general, and would, in isolation, have pointed to the opposite conclusion. In the first of the three examples Johnson used to instantiate the first definition, meat is distinguished from corn and bread in Genesis: 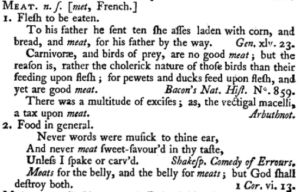 Darling J, having rejected the dictionary as well as popular idiom, considered the overall purpose of the 1677 Act: in his judgment, it was intended to prevent people exercising their ordinary calling on Sunday, the day of rest. It was clear that 'works of necessity and charity'  should be permitted, which led to the saving within s. 1 itself; as for s. 3, he went on to say:

'It also occurred to those who framed the Act that it was necessary to make provision against people being prevented from obtaining their Sunday dinner. Some people prepared that meal at home; others got it from a cookshop. Accordingly the exemption contained in s. 3 was inserted as to the dressing of meat on Sunday.'

Examining the statutory language in this way, Darling J came to the clear conclusion that ice cream could not, for these purposes, be 'meat'  (leading, as Sir Robert Megarry wryly put it in his Second Miscellanies-at-Law, to a headnote 'of splendid brevity', which read as follows: 'Ice-cream is not "meat" within s. 3 of the Sunday Observance Act, 1677').

The 1677 Act is now long repealed: with it, the definitive distinction between ice cream and potatoes is, for these purposes at least, consigned to history.

ARTICLE TAGS
UK Family and Matrimonial Wills/ Intestacy/ Estate Planning Litigation, Mediation & Arbitration Trials & Appeals & Compensation
POPULAR ARTICLES ON: Family and Matrimonial from UK
Trusts - Common Myths And Misconceptions
Weightmans
Trusts can be a useful tool in estate planning, enabling an individual to provide for their chosen beneficiaries by alternative means rather than an outright gift.
The Relationship Between Marital Breakdown And Loss Of Employment In The UK
Withers LLP
Divorce Day is said to be the first Monday of the new year, when family lawyers' phone lines ring off the hook after couples had spent a fraught Christmas together.
Deeds Of Variation And Deprivation Of Assets
Weightmans
A ruling by the Court of Protection has raised some interesting questions as to whether a deed of variation which allows a beneficiary to maintain an entitlement to means-tested benefits...
Trust Disputes — What, Why And Who?
Weightmans
A trust is an arrangement where one party (the settlor) gives someone else (the trustee) the ability to manage assets for the benefit of another person (the beneficiary).
Separation And Non-compliance: Dealing With Uncooperative Parties
Birketts
Yes. The Family Court has a range of powers that can assist. However it is worth bearing in mind that people find relationship breakdown difficult and stressful. Taking a punitive...
Divorce Day: New Year, New Me – Starting Again With Minimal Stress And Tension
Birketts
As a new year begins, January becomes an opportunity for a fresh start and a promise to do something differently. For some, this can simply mean drinking less or hitting the gym more but for others...
FREE News Alerts
Sign Up for our free News Alerts - All the latest articles on your chosen topics condensed into a free bi-weekly email.
Register For News Alerts
Article Tags
UK Family and Matrimonial Wills/ Intestacy/ Estate Planning Litigation, Mediation & Arbitration Trials & Appeals & Compensation
Related Articles
The Court Of Appeal Determines Where An Executor Appointed In Respect Of A Foreign Will Derives Their Authority To Bring English Proceedings Herbert Smith Freehills
Why You Should Update Your Will Weightmans
Divorce And The Family Business - How To Protect Your Assets Giambrone & Partners
Dictionary Of TLATA And Inheritance Act Claims Due To Be Published In February 2023 Gatehouse Chambers
Does Language Matter In The Family Court? Weightmans
Mondaq Webinars
Malta as an e-Money and Payment Services Centre
GVZH Advocates
Considering the Nigerian Start-Up Act & The Opportunities for Tech
Oake Legal
More Webinars
Comparative Guides
Anti-Corruption & Bribery
Artificial Intelligence
Banking Regulation
Blockchain
Cartels
More Guides
Mondaq Advice Centres
UK
Coming to and Investing in the UK
Global
Trademarks in SAARC Countries
More MACs
Upcoming Events
Mondaq Social Media