On 4 January 2022, after approximately four years from the UK government's first attempt to reform the UK national security screening regime, the National Security and Investment Act 2021 (NSIA) became operational. The NSIA represents a radical overhaul to investment screening in the UK as it introduces for the first time a mandatory and suspensory filing obligation for transactions in 17 sectors considered as particularly sensitive (among which are Synthetic Biology and Artificial Intelligence).

Alongside a mandatory and suspensory regime for certain transactions, parties are also encouraged to notify transactions voluntarily if-regardless of the sector concerned-the transaction might have national security implications based on (i) nature/identity of the acquirer, (ii) target's activities, and/or (iii) nature and degree of control acquired. Unlike the mandatory filing obligation which only captures acquisition of entities, the voluntary regime also captures the acquisition of tangible and intangible assets-thereby including the acquisition, assignment and/or licensing of IP rights over e.g. molecules, compounds, methods or technologies.

The flowchart below summarises the main considerations relevant to a decision as to whether a filing under the NSIA is to be made: 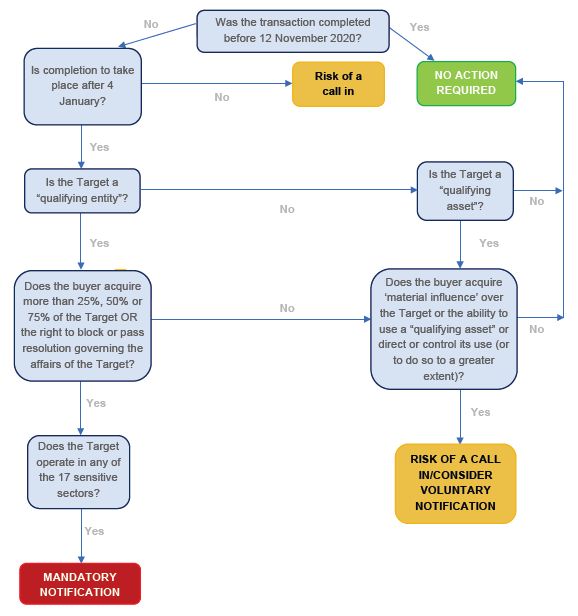 The new regime (Regime) has significant implications for investments in the life sciences sector. Due to, among others, the breath of its scope, the low equity/control right thresholds required to trigger a filing, the potential consequences for missing a mandatory filing (which include criminal sanctions), as well as the UK government's power to "call in"-for a period up to 5 years from closing-transactions subject to a voluntary filing, the Regime is likely to cause increased burden, costs, uncertainty and timing for deals in life sciences.

In our recent advisory (available at here), we analyse the most relevant features and practical considerations of the Regime, also in light of our experience so far and our intelligence of how the Regime has operated in its first six months of life.

The following are among the points worth flagging: