In a comforting decision for trustees, the Hong Kong Court of Final Appeal in Zhang Hong Li v DBS Bank and others has found that trustees do not owe a "high level supervisory duty" in respect of an underlying company's investments, where supervisory duties are excluded under the terms of trust (in what is commonly referred to as an "anti-Bartlett" clause). This case has been keenly discussed across major international private client and trust common law jurisdictions.

The Court of Final Appeal's judgment overturns earlier decisions in the case which had cast doubt on the scope of anti-Bartlett provisions, a common feature of many trust investment structures. The earlier decision of the Court of First Instance had found that the trustee had been in "serious and flagrant" breach of its duties and should not have approved various investment decisions of its underlying company, and that it owed a "high level supervisory duty" with regard to the purchase of high-risk investment products. This was despite the fact that the investment decisions were made and implemented by the trust's investment advisor (who was also a settlor of the trust and one of the plaintiffs to the proceedings), and despite a comprehensive "anti-Bartlett" clause (which broadly provided that the trustee was not responsible to supervise the underlying company's investment decisions).

The Court of Final Appeal's decision will be welcomed by trustees and their professional advisors as the investment structure in the case (broadly illustrated below) is one which is commonly utilised in practice. The structure allows a settlor to direct an investment profile or products of their choice rather than being restricted to the more conservative approach which a p rofessional trustee would likely prefer. 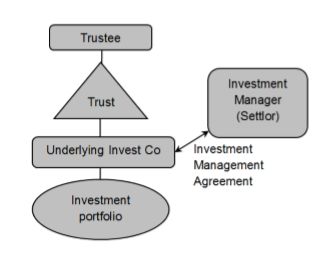 Prior to the Court of First Instance's decision, trustees had generally expected protection from claims of this nature by virtue of an anti-Bartlett clause in the relevant trust agreement. The case raised important questions as to the scope of anti-Bartlett clauses and the extent to which they should be relied upon by trustees.

There was also a question of whether a trustee, by its conduct (assuming a role of giving after-the-event approvals) could negate the terms of an anti-Bartlett clause.

The Hong Kong Court of Final Appeal was definitive in its finding that the purported "high level supervisory duty" was plainly inconsistent with the anti-Bartlett provisions  in the trust agreement. Thus, the anti-Bartlett provisions were effective in relieving the trustee from any obligation or duty to interfere with the investment decisions and business of the underlying company. Further, the after-the-event approvals of the trustee did not manifest any additional supervisory duties.

The Court of Final Appeal similarly found that the corporate director of the investment company did not have any supervisory duty in respect of the investment decisions and was not in breach of its fiduciary duties.

While the matter was heard in Hong Kong and the governing law of the Trust was Jersey law, the case is of significant importance for most common law jurisdictions, particularly offshore, where trust structures of this nature provide an attractive and commonly utilised investment vehicle.

ARTICLE TAGS
Bermuda Corporate/Commercial Law Corporate and Company Law Litigation, Mediation & Arbitration Trials & Appeals & Compensation
POPULAR ARTICLES ON: Litigation, Mediation & Arbitration from Bermuda
Case Summaries
Appleby
The Supreme Court had to address a preliminary objection raised by co-respondents Nos. 1, 2 and 3 on the ground of jurisdiction to contest and challenge the court's competence to determine the issues...
Snapshot: How Does The JFSC Gather Information - And Is It Protected?
Ogier
In order to discharge its functions effectively the JFSC requires a broad range of information, which often comes from the very firms it regulates.
Case Update: Polarcus – A Declaratory Relief For Cayman Islands Official Liquidators
Ogier
The Grand Court of the Cayman Islands (Court) has confirmed that the Court has the jurisdiction to grant declaratory relief within winding-up proceedings (In the Matter of Polarcus Limited (In Official Liquidation)...
Snapshot: Being Open And Cooperative With The JFSC - What Does It Involve And Why Does It Matter?
Ogier
Registered firms will be aware that one of the Principles to which they are subjected under the JFSC's Codes of Practice requires them to "deal with the JFSC in an open and co-operative manner" (sometimes referred to as the "duty of candour").
Snapshot: The JFSC's Decision-Making Process And Challenging JFSC Decisions
Ogier
If a firm or individual finds itself the subject of JFSC action, it is important to understand the JFSC's decision-making process.
Court ordered interim measures to support arbitration
Timothy Loh
Explore the scope of powers of the court & discusses two common types of interim measures which the court may grant.
FREE News Alerts
Sign Up for our free News Alerts - All the latest articles on your chosen topics condensed into a free bi-weekly email.
Register For News Alerts
Article Tags
Bermuda Corporate/Commercial Law Corporate and Company Law Litigation, Mediation & Arbitration Trials & Appeals & Compensation
Similar Articles
Powered by mondaq AI
MATCH
61%
Trustee Liability Issues – Offshore - Discussion Paper Appleby
56%
In The Courts: Trust Disputes Appleby
53%
To Be Or Not To Be A Trustee… MJM Limited
53%
For Love Nor Money?... A Guide To Trustee Fees, Expenses And Service Agreements Appleby
51%
Trustees: Insolvent Trusts And Conflicts Of Interest Kennedys Law LLP
Related Articles
Privy Council Issues Landmark Decision On Freezing Injunction Jurisdiction Conyers
Going It Alone Conyers
Bermuda Litigation Guide 2022 (Chambers) Carey Olsen
Enforcement Of Foreign Judgments - Bermuda (Kluwer Law International) Carey Olsen
Q&A With Jeffrey Elkinson, Director In The Litigation Department Conyers
Mondaq Webinars
Litigation Funding in Canada
Nomos Capital Corp.
Private Wealth - Getting it Right: Trusts, Foundations and Funds
Dixcart Group Limited
More Webinars
Comparative Guides
Immigration
Insurance
Mergers & Acquisitions
Private Client
More Guides
Mondaq Advice Centres
Global
Trademarks in SAARC Countries
More MACs