After thinking more about the recent decision by the U.S. Patent and Trademark Office to (at least initially) refuse federal registration status to the mark SLANTS used by a band of performers of primarily Asian descent, (see May 6, 2915 blog post "Disparagement, Political Correctness and the First Amendment"), I thought that, just for fun, I would check whether the relatively recent legalization of marijuana in a couple of states has led to rash of MARIJUANA mark filings.  Yup.

Just a few of the over 100 active pending MARIJUANA trademark applications include:

Really?  The MEDICAL MARIJUANA BUSINESS LAWYERS registered for attorney services in Florida? The irony is astounding to me.

The "other half" of the test for refusing marks under Section 2(a) of the Lanham Act, in addition to a finding that a mark is "disparaging," is the refusal of registration of a mark on grounds that it is "immoral or scandalous."  As defined by the courts, scandalous has been held to mean "shocking to the sense of propriety, offensive to the conscience or moral feelings or calling out for condemnation. "  In re McGinley, 660 F.2d 481, 484 n.6, 211 USPQ 668, 673 n.6 (C.C.P.A. 1981),

In fact, historically, famous marks have been entitled to protection from dilution by marks that are not confusingly similar, where the use amounts to tarnishment of the distinctive qualities associated with the mark.  Among the examples of unlawful tarnishing uses is use of a famous mark in connection with illegal drugs, as demonstrated in every trademark textbook and treatise I have ever seen by use of the famous stylized "Coca-Cola" trademark as shown below: 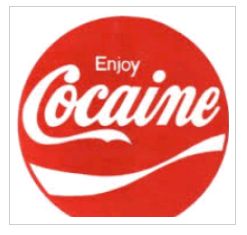 Certainly if the marks SLANTS and REDSKINS are disparaging then shouldn't MARIJUANA marks be held to be scandalous or immoral, at least when used in connection with drugs that are illicit in most of the country?  In fairness, the Lanham Act is written so as to allow refusal of the mark on grounds that the mark alone (without regard to its intended use) meets the scandalous or immoral criteria.

Whenever I am in Colorado visiting family, I amused and confused by use of the green cross symbol by marijuana dispensaries. 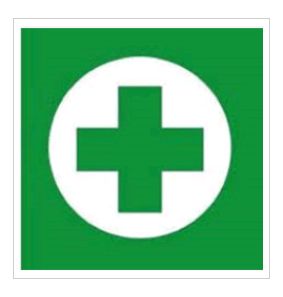 I assume that the original commercial impression was intended to suggest that the marijuana being dispensed at that location was for "medical" or "healing" uses.  Now that marijuana is legal in Colorado, I have to conclude that those who use some version of the green "first aid" symbol to sell marijuana intend to suggest that their products offer health benefits, even for the healthy among us.  Although the green cross design has arguably become merely descriptive (and thus unregistrable) for use with the sale of marijuana, a number of variations on the theme are quickly making their way toward branding status, i.e. registrable design trademarks.

The times they are a-changin'.