by Emre Hatem and Mevlüt Akbaş
PwC
To print this article, all you need is to be registered or login on Mondaq.com.

Total roads and motorways in Turkey reached nearly 66,4k km as of 2016 with the impact of the focus on divided road investments within the last decade. Increase in total roads and highways stayed limited due to priority of transformation of the existing roads into divided roads.

Turkey plans to invest in c. 5,8k km new motorways until 2023 with BOT model and reach 7,9k km motorways in total including the Dardanelles Bridge, which will be tendered in January 2017 and the Istanbul Big Tunnel Project. The estimated total investment size for new motorway projects is exceeding USD 70 bn, which in turn will mean around USD 50 bn debt financing need and USD 20 bn equity investment.

The contractual and financial structures of the existing mega motorway PPPs are proved to be bankable and expected to lead the structures of upcoming projects. 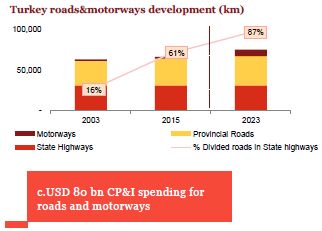 National railway network length is 12,5k km as of March 2016 where only 1,2k km of this network is high speed lines ("HSL") and the remaining 11,3k km is conventional lines.

The total length of planned additional railway lines is 12,6k km until 2023 which in turn will mean c.USD 30 bn investment in following 8 years time.

Currently the HSL projects are constructed through public procurement method.

Together with the road investments, international investors' interest is also increasing in Turkish railway sector investments. However localization strategy and the Government's support has a significant importance on the feasibility of the railway projects for the private sector for new HSL and train sets tenders. 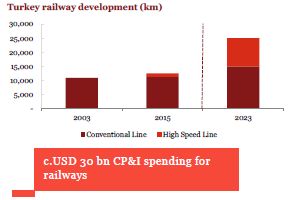 Utilizing the Geographical Advantage of the Maritime

The estimated investment amount is well exceeding USD 30 bn to reach 2023 targets, considering the transformation of fishing ports into marinas in addition to new port investments and other investments in maritime transportation sector.

Speaking of the financing of these projects, funds exceeding USD 25 bn will be required in addition to equity financing. 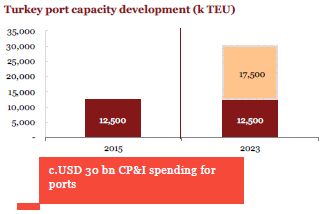 The initial target for 2023 was to reach 60 airports operational with a total capacity of 350 million passengers per year through c.USD 30 bn investment.

In line with the 2023 targets, the Government plans to increase the number of operating airports in the domestic flight network from 55 to 63 with the construction of new airports in Yozgat, Rize- Artvin, Bayburt-Gümüşhane (Salyazı), Niğde-Aksaray, Karaman, İzmir Çeşme Alaçatı, western Antalya and Çukurova Regional Airports. These airport investments will be made either with PPP method or public procurement method.

The most significant CP&I project in the aviation sector is 3rd Airport project in Istanbul which is expected to be partially operational in 2018. This airport is planned to replace the Ataturk Airport when it is completed with its total planned annual capacity of 150mpassengers. 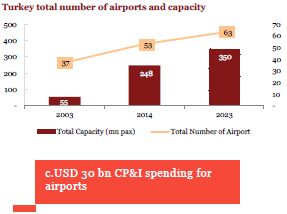 50k of the total required new/transformed quality beds are planned to be introduced through ongoing healthcare PPP program where 34 projects are already identified nationwide. Total expected investment amount of these projects is exceeding USD 16 bn.

The estimated investment amount for the additional 105k quality bed investment is c.USD 14 bn, which will be executed by the Ministry of Health, the universities and the private sector.

Currently, 11 of the already identified 34 PPP projects has reached financial close or close to financial closing. 11 out of remaining 23 projects are still in the preliminary tender stage. The total number of the PPP projects is also expected to increase which will increase the total estimated investment amount as the integrated healthcare campus projects require significantly higher investments compared to the lower sized standard hospitals. 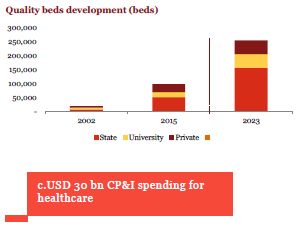 In line with the developing communication technologies, the importance of the CP&I investments in telecom sector is increasing. The total investment size in telecoms exceeded USD 20 bn level for the last decade and it is estimated to exceed annual investment amount of USD 3 bn for the following 8 years until 2023.

Apart from the Government's goals, the telecoms sector is structured to reflect to the requirements of the market. Currently the key growth areas in telecoms sector are; 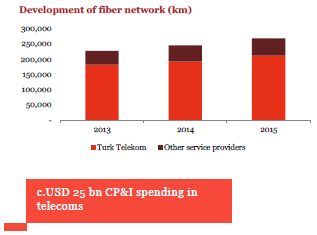 Localization and Diversification of Supply

Turkey's total installed capacity of the power plants has reached to 78,1 GW as of September 2016. Total electricity consumption has reached to 264,1 TWh in 2015 while the total production is 259,7 TWh. The main resource of the electricity generation is natural gas (37,8%), followed by the coal with 28,4% share in total generation.

The Government estimates that the total annual consumption will reach to 357 TWh in 2020. In order to meet the electricity demand, the Government aims to increase the total installed capacity to 125 GW by 2023 by mainly increasing the renewables and indigenous coal fired power plants in addition to the introduction of Nuclear Power Plants ("NPP"s) within the Turkish electricity generation environment.

Currently, two NPPS have already been identified and are in preliminary investment stage with total planned capacity of 9.200 MW. Total expected investment amount for these projects is c.USD 36 bn where a third nuclear power plant is also in consideration of the Government.

In addition to the NPP investments, excluding the replacement of the existing power plants, c.USD 60-65 bn additional investment is also required to reach the 125k MW installed capacity target in 2023. 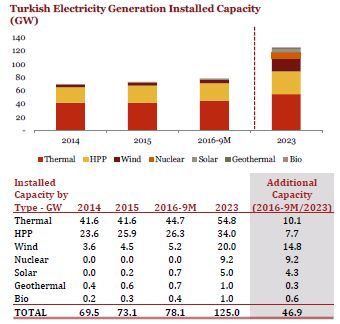 Another focus area of the Government and private sector will be the privatization of existing energy assets which has become a standard practice in the last 5 years. After the successful handover of large thermal power plants and a number of hydro power plants, the pipeline in this area is mainly composed of several medium sized hydro power projects and a limited number of sizeable coal and natural gas power plants. The brownfield investments for the renovation in thermal assets not only will improve the environmental effects of the projects but also will impact the total installed capacity since the current utilization rates are very low.

The Government also initiated a new privatization model to increase the utilization of renewable energy resource areas for solar and wind power generation. This model includes the transfer of usage rights of the designated areas to be used for the construction of solar and wind power generation facilities. As of report date, for the solar projects the government conducted studies in five locations to assess the potential of the development areas where the first tender is announced for Konya Karapınar site. The total expected investment for this site is c. USD 1.2-1.5 bn for the construction of photovoltaic solar module production facility with annual production capacity of 500MW and solar power generation facility with 1.000 MW installed capacity.

Considering the size of the expected CP&I investments in the following years which will reach to c.USD 325 bn, the Turkish CP&I market will require significant amount of funds to realize the planned projects. Currently the main driver of the financing CP&I projects in Turkey is local commercial banks for the debt financing and the local investors on the equity side for private sector investments and PPP projects.

The Government's role has a significant importance for the realization of the planned investments in addition to the privatization transactions and the financial support to be provided through the Turkish Wealth Fund.