United States: How The SECURE Act Could Change The Landscape For Retirement Plans And IRAs – Perspectives For Employers, Asset Managers And Insurance Companies

On December 20, 2019, President Trump signed into law the fiscal year 2020 spending bill, which included the Setting Every Community Up for Retirement Enhancement Act (SECURE Act). The SECURE Act makes significant changes to the operation of private retirement plans, including: (i) allowing for unrelated employers to join together to offer a multiple employer retirement plan (referred to as an "Open MEP"); (ii) easing plan sponsors' ability to offer in-plan annuities (and making it simple for those same annuities to be transferred to another eligible retirement plan) and (iii) allowing certain part-time workers to be eligible to participate in 401(k) plans.1

Although the SECURE Act is primarily focused on helping small employers offer retirement savings vehicles for their workers, the legislation could potentially change the way that employers of all sizes structure their retirement plans. The SECURE Act also presents significant business opportunities to plan sponsors (big and small), asset managers and insurance companies. In the coming months and years, these stakeholders should look to leverage the SECURE Act to devise new types of arrangements that facilitate growth in retirement saving among workers, while harnessing economies of scale.

The SECURE Act includes a long-awaited provision that will allow two or more unrelated employers to join together to sponsor a qualified retirement plan for their workers without limitations, known as an "open multiple employer plan" or "Open MEP". Most importantly, MEP participation no longer requires participating employers to share a common nexus, such as the same industry or geographic area, outside of the retirement benefit they are jointly providing via the MEP. This requirement had prevented many employers from participating in MEPs, leaving them little choice but to maintain a separate plan or not offer a retirement savings vehicle at all for their employees.

The SECURE Act allows different employers lacking a common nexus to participate in an Open MEP, which would be administered by a third party "pooled plan provider," such as a financial services firm. The pooled plan provider would be required to acknowledge in writing that it is the plan's named fiduciary under ERISA, and the plan administrator responsible for performing all duties reasonably necessary to ensure that the pooled plan provider complies with the applicable Internal Revenue Code requirements and ERISA. Each participating employer in the Open MEP would be treated as the plan sponsor with respect to the portion of the plan attributable to that employer's employees (or beneficiaries of such employees). This means that the participating employers' only responsibility would be the selection and monitoring of the pooled plan provider.

The effect of this change could be enormous. The Open MEP framework allows a sponsor to (i) consolidate and outsource fiduciary functions (including higher risk activities like investment menu design), (ii) gain access to cost-efficient institutional investment options and (iii) reduce plan administrative expenses. Given the recent spate of class actions alleging claims of imprudent investing and excessive fees, the Open MEP framework could appeal to employers of all sizes looking to shield themselves from ERISA fiduciary liability. Eventually, the Open MEP framework could mirror the private sector health insurance system where the pooled plan provider is analogous to a health insurance carrier, maintaining benefits and providing administrative services to employees of hundreds (if not thousands) of different employers of various sizes.

For asset managers, insurance companies, record keepers, and other plan advisors, the opportunity to act as a pooled plan provider could be a major source of new business. As a first step, however, the Department of Labor must issue guidance on the SECURE Act's implementation. These rules will need to address issues, such as the types of transactions that will be permitted for pooled plan providers, and how pooled plan providers must deal with conflicts of interest.

The shift away from defined benefit plans to defined contribution plans over the last few decades has resulted in Social Security retirement benefits becoming the primary source of guaranteed retiree lifetime income (LTI) for many people. Annuities and other LTI options are generally not offered through defined contribution plans, in large part because the pre-SECURE Act law made the selection of an LTI provider (i.e., an insurance company) a high risk ERISA fiduciary act for plan sponsors. 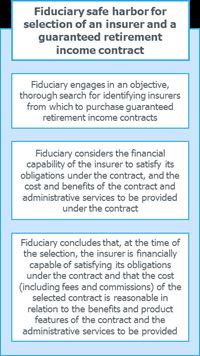 The SECURE Act addresses this uncertainty by specifying optional measures a plan fiduciary can take with respect to selecting an insurer and a guaranteed retirement income contract that will assure the fiduciary has exercised its duties in accordance with ERISA's prudent expert requirement. These measures provide an optional safe harbor, but do not establish minimum requirements or the exclusive means for satisfying the prudent expert standard. Moreover, the legislation specifies that nothing in these requirements is to be construed to require a fiduciary to select the lowest cost contract. Accordingly, a plan fiduciary may consider the value, including features and benefits of the contract and attributes of the insurer (such as the insurer's financial strength) in conjunction with the contract's cost. In a key change from prior law, a fiduciary that satisfies the requirements of the safe harbor will not be liable for any losses that the participant or beneficiary incurs due to the insurer's inability to satisfy its financial obligations under the terms of the contract following the distribution of, or the investment by or on behalf of a participant or beneficiary pursuant to, the selected guaranteed retirement income contract. This should mitigate plan sponsors' fear of being exposed to litigation if the insurance company or annuity provider they select becomes insolvent (a risk which plan sponsors may not be capable of fully assessing).

Between the fiduciary safe harbor and the increased portability of LTI options, Congress has made clear that defined contribution plans represent an important and viable market for annuities. This position is backed by market research that suggests offering annuities as part of a defined contribution plan is beneficial to participants because it pools longevity risk and allows participants to transition more easily from accumulation of financial assets to reliance on those assets later in life. Moreover, research indicates that participants with LTI in their portfolios generally save more than the average plan participant, are more likely to maintain their strategic asset allocations even during equity market downturns and are better able to manage their spending patterns.

For plan years beginning after December 31, 2020, the SECURE Act requires non-collectively bargained 401(k) plans to permit any employee who has worked at least 500 hours per year with the employer for at least three consecutive years and has met the age requirement by the end of the three-year period to make elective deferrals under the employer's retirement plan. In other words, long-term part-time employees can no longer be excluded from a plan because the employee has not completed a year of service, which is generally defined as having completed at least 1,000 hours of service during the year. Once a long-term part-time employee meets the age and service requirements, such employee must be able to commence participation no later than the earlier of (i) the first day of the first plan year beginning after the date on which the employee satisfied the age and service requirements or (ii) six months after the date on which the individual satisfied those requirements.

The legislation permits 401(k) plans to exclude long-term part-time employees from participating in the design-based safe harbors (including the automatic enrollment safe harbor), as well as from being eligible for employer non-elective and matching contributions, if they haven't otherwise completed a year of service (the 1,000 hours of service during the year as described above). Moreover, employers would receive nondiscrimination testing relief, including permission to exclude these employees from top-heavy vesting and top-heavy benefit requirements.

For sponsors who currently exclude part-time employees from participating in their plans, these changes will require amendments to plan documents, allowing this class of newly-eligible employees to make elective deferrals in the future.

The SECURE Act represents a major step to address the retirement crisis facing thousands of workers in the United States. The changes it makes could have broad implications for employees, employers, financial institutions and insurance companies. In particular, its provisions pertaining to Open MEPs and LTI arrangements could potentially alter the landscape for how defined contribution plans operate and the types of investment products they offer.

1. This Alert focuses on the portions of the SECURE Act that have the most direct impact on plan sponsors, asset managers and insurance companies; however, there are many other significant provisions of the legislation, which are not addressed in this Alert, including: changes in the maximum age for IRA contributions, extension of the start date for required minimum distributions, and changes to the functioning of certain inherited or "stretch" IRAs. The SECURE Act also offers incentives for small employers to establish retirement plans and allows for higher automatic deferrals for employees.