UK: Sheep Farming And The Doctrine Of Equivalents

Contemplating the Supreme Court Actavis v Lilly1 decision, and playing around with Word, I was prompted to draw the following two drone's-eyeviews of grazing sheep.

Patent attorneys may recognise similarities with Article 1 of the Protocol on the Interpretation of Article 69 EPC which states that: 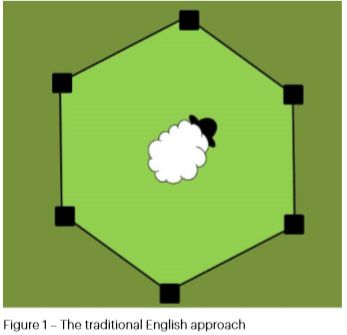 "Article 69 should not be interpreted as meaning that the extent of the protection conferred by a European patent is to be understood as that defined by the strict, literal meaning of the wording used in the claims, the description and drawings being employed only for the purpose of resolving an ambiguity found in the claims. Nor should it be taken to mean that the claims serve only as a guideline and that the actual protection conferred may extend to what, from a consideration of the description and drawings by a person skilled in the art, the patent proprietor has contemplated. On the contrary, it is to be interpreted as defining a position between these extremes which combines a fair protection for the patent proprietor with a reasonable degree of legal certainty for third parties." 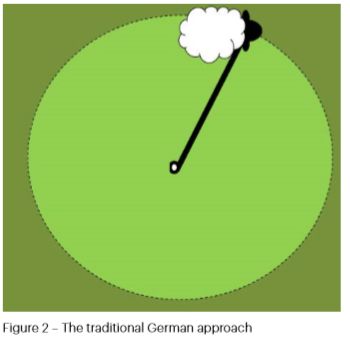 The Protocol on Interpretation was a compromise. Prior to 1978, the Continental view was that the UK courts took an overly strict interpretation limiting the scope of protection to the literal wording of the claims. Conversely, the British view, of German "Kerntheorie" was that that the German courts were overly liberal using the claims merely to identify a "stake in the ground" of an inventive concept. The Protocol on Interpretation clearly states that neither such approach is correct.

The Protocol on Interpretation establishes that the scope of protection is neither limited to a strict literal interpretation of the wording of the claims (the fence post approach in Figure 1), nor are the claims used simply to define an inventive concept (the stake and rope approach of Figure 2). Rather, staying with the sheep farming analogy, effectively Article 1 provides that the scope of protection looks something like Figure 3.

Where a sheep is constrained both by a stake and a rope and by a fence but where the sheep is able to reach over the fence in some areas – the areas of equivalents – all of which lie within the outer limit which could be reached in the absence of the fence (i.e. everything within the inventive concept of the invention – the inner circle in Figure 3).

When drafting patent claims an applicant has a choice where they put their fence posts, subject to two main limitations.

First, the fence posts can only be placed within of the clear and unambiguous disclosure of the application – the outer dotted circle in Figure 3. If the claims are amended so that the claim language extends beyond that limit, then a patent will be invalid on the grounds of added matter.

Second, the boundaries of the claims must not extend beyond the inventive concept or technical effect enabled by the patent. 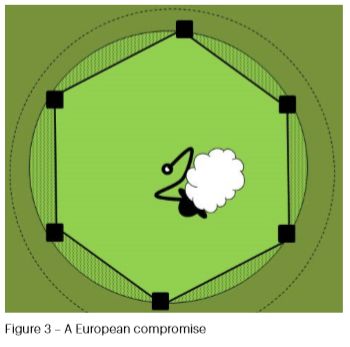 Putting the boundaries of the claim outside of the "inventive concept" as is shown in Figure 4 will mean that a sheep can only eat the grass in part of the field bounded by the fence.

In patent terms this is a clear example of over-claiming. In such circumstance the patentee is not entitled to the entirety of the monopoly claimed. Objections to such overclaiming can be formulated in terms of a general principle that the extent of a patent monopoly should correspond to the technical contribution in the art as originally formulated in Agrevo/ Triazoles T0939/92 and has been repeatedly endorsed by the UK courts most recently by the Supreme Court in in WarnerLambert2 and then again in Actavis v ICOS.3

As that establishes that Figure 3 is illustrative of the correct approach to claim interpretation – the inventive concept or technical effect must extend at least up to or beyond the scope for the boundaries of the claim – the question then becomes how far beyond the boundaries of a field can a sheep venture?

Following Actavis v Lilly, claim interpretation in the UK is a two-step process. First, an alleged infringement is assessed against a purposive interpretation of the claims. Then, if an alleged infringement is found to fall outside of the scope of the claims, a further assessment is made to determine whether the patent is infringed under the doctrine of equivalence. This second step is determined by the Court considering the follow three questions: 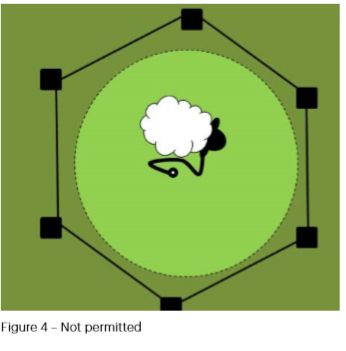