UK: Beyond Pharma: The Role Of Medtech In Antimicrobial Resistance

A major review published by the World Health Organisation threw the spotlight once again on the issue of antimicrobial resistance (AMR) and the ongoing misuse of antibiotics around the world.

Despite heightened public awareness of the challenge and potentially disastrous consequences of AMR, the WHO's latest report reveals that much remains to be done with drastic overuse of antibiotics still a reality in many countries around the world. In 49 of the countries surveyed by the WHO, for example, it was found that antibiotics meant to be held in reserve for when first and second resort drugs fail, accounted for half of all prescribing.

Mongolia was found to have the highest level of prescribing globally, with 64.4 doses issued per every 1000 people, followed by Iran and Turkey with 38.8 and 38.2 doses respectively. No matter which countries are the worst or best behaved when it comes to using antibiotics appropriately, however, the global movement of people and goods ensures that AMR is a challenge for all of us.

While novel pharmaceuticals are vital when mitigating the effects of ever-evolving pathogens, they are not the only solution. Often what is driving over-prescription of antibiotics in countries such as those named in the WHO report, is not a wilful decision to use antibiotics unnecessarily, but rather risk aversion.

If a patient presents with symptoms that could equally be those of a common cold or a serious bacterial infection, and there's no clear way of being sure which is the correct diagnosis, then most of us would likely opt to prescribe antibiotics, rather than risk the patients' health. This is where better diagnostic technology becomes a significant tool in fighting AMR.

If technology can be developed that allows clinicians in rural Mongolia and elsewhere to diagnose patients quickly and accurately, as well as make the distinction between bacterial infection and less serious complaints, then this will go a long way towards stemming over-prescription.

Like the pharmaceutical industry, the medical devices and technology (medtech) industry has also been responding to the AMR challenge. At Marks & Clerk, we recently worked with Nesta – the innovation foundation – on a  report looking at the levels of innovation geared towards AMR in the medtech industry.

Our findings give some cause for hope, but also reveal that there is some way to go if medtech is to make a meaningful contribution to stopping the over-prescription of antibiotics. While, for example, we have seen a generally upward trend in patent filing in the field of point-of-care (POC) diagnostic devices over the past 10 years, this has in recent years plateaued and perhaps gone into reverse.

There is a significant lag between a patent being filed, and it showing on any patent register, so some of the decline we have seen will be attributable to that lag. Nevertheless, the lag is unlikely to account for all of this decline, and if this trend continues into coming years it should serve to focus minds further on the challenge of AMR. 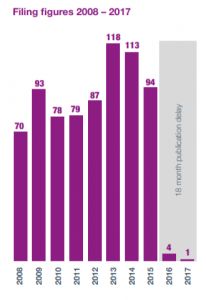 Despite the decline in patent filings we've seen aimed at POC diagnostics in recent years, the filings we have seen have been more focused on better bacterial diagnostics.

Interestingly, although the relative numbers of patent filings have decreased in the last five years, the percentage relating to the detection of bacteria has increased over recent years from 51% to 81%.

This may point to increasing awareness of antibiotic resistance and misuse, and the importance of detecting bacteria correctly. Correctly detecting whether an infection is bacterial or viral in origin will undoubtedly reduce inappropriate use of antibiotics, and identifying a particular bacterial species and susceptibility of antibiotics will enable the correct narrow-spectrum antibiotic to be chosen.

Minds also seem to have been focused in the medtech world – as they no doubt have been in the pharmaceutical world – by the WHO's publication of a list of 12 'priority pathogens'. These are the 12 pathogens determined by the WHO to pose the greatest risk to human health and some of which exhibit resistance to multiple antibiotics. While it is too soon after the WHO publication to see any resultant filing activity, the percentage of applications specifically mentioning the types of bacteria in the WHO list appears to have reduced dramatically in the last five years. However, despite this decline, the percentage of filings relating to the detection of bacteria has increased.

It's clear that, alongside novel pharmaceuticals, better POC diagnostic devices have a significant role to play in stopping the emergence of antibiotic-resistant bacteria.

As with pharmaceuticals, however, the market for medtech devices aimed at AMR is frustrated by the nature of the problem. Just as there is an illogic to investing huge sums of money in the development of antibiotics which, to remain effective, must be used sparingly and so have a limited market, so too the medtech device which can be easily deployed globally to allow better diagnosis would necessarily have to be affordable, therefore limiting potential returns. So, while willingness and the technical capability are plentiful, investment is sometimes less so.

The nature of AMR, and the inversion of normal economics that its solution demands, will continue to challenge innovation in this area. Solutions must be found, however, to avoid returning to what many claim would be the medical 'dark ages' if our antibiotics are rendered ineffective by overuse.