Turkey: What is Next in the Beer Market?

The Turkish competition watchdog, TCA, has put its signature under a milestone decision for the distribution practices of Anadolu Efes, the leading beer brand, holding the dominant position in Turkey.

In its application, Anadolu Efes requested an individual exemption for its Limited[1] Exclusive Open Selling Point[2] Agreement which is planned to replace the former Limited Duration Agreement executed with the Standard Points. The Agreement was planned to be executed with the open selling points determined in accordance with the predicted calculations in the application, and other open selling points would continue to be a party to the former agreement. Back in 2012, TCA granted a negative clearance for the former agreement, but now Anadolu Efes brought forward the arguments with regard to the revisions in the availability agreements in accordance with the new market conditions, for the return of the investment realized and to render possible future investments for the open selling points. 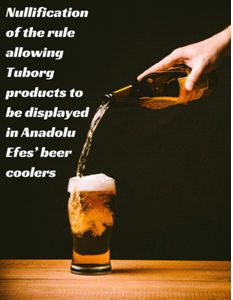 Another important point raised within Anadolu Efes' application was the withdrawal of Tuborg's[3] exclusivity granted by the TCA, in case the EPFA's individual exemption request was denied, and the nullification of the rule allowing Tuborg products to be displayed in Anadolu Efes' beer coolers.

The Agreement, which is subject to the TCA's assessment, is planned to be executed for two years and contains exclusivity with regard to the draft beers and visuals of the same, and yet no exclusivity for the beer coolers is contemplated. As a side note, non-compete provisions and allocation of customers/regions are not stipulated within the Agreement.

Before conducting its assessment, the TCA asked the opinion of certain different voices in the market such as Tuborg, the Tobacco and Alcohol Market Regulatory Authority and specific restaurants  in order to have a crystal clear understanding of the open selling point market.

When reviewing the Agreement, TCA primarily conducted a negative clearance assessment. As the Agreement includes the exclusivity provisions that would prevent the open selling points from selling competing brands and impose penalty clauses in the contrary case, it also stipulates rebates to be provided on the condition of exclusivity, which contradicts the earlier decisions[4] of the TCA on Anadolu Efes' practices. The TCA concluded that a negative clearance shall not be provided for the Agreement.

Moving on, the TCA reviewed whether the Agreement should be assessed under the Vertical Block Exemption Regulation numbered 2002/2 (the BER). Considering the latest market shares provided for 2016, the TCA stated that the Agreement shall not benefit from the block exemption provided under the BER, as it exceeds 40%.

TCA weights the Guideline on the Vertical Agreements during its assessment. When assessing whether the Agreement ensures new developments in the production of goods and services, the TCA shows regard to the two distinctive features of the market; value of the investments to the selling point and how the customers benefit from such value. TCA concluded that the limited exclusivity in the draft beers would help increase the investments for the open selling points to the benefit of the customers; however, Anadolu Efes would not be able to reveal how the services would improve in concrete examples. On the other hand, the TCA concluded that such exclusivity would provide for increased visuals in the open selling points, which would satisfy the condition of ensuring improvements in the Competition Act.

Having said that, as the sale of draft beer is important for open selling points, any exclusivity provided for the draft beers would affect the availability of Tuborg and other beer producers and also disadvantages the customers who seek a variety of beers. In other words, the level of customer benefit and the improvements in the service would not eliminate the reduction in the product variety and it would cause disadvantages rather than benefits to the customers.

Although the termination of the Agreement with a three months' notice period and the agreement period for two years are important provisions for "not limiting the competition more than what is compulsory for achieving the new developments and benefiting of the customers from the same," the TCA indicated that competitors and other importers would be affected considering the prevention of having coasters or visuals of other competitors present, together with the advertising bans, and also that the final condition for the individual exemption is not met by the Agreement.

Equally important, TCA also rejected Anadolu Efes' request set forth above indicating that such decision would directly affect Tuborg, and it is required to reassess former decisions of the TCA considering the latest market conditions and with a deep-dive analysis.

All things considered, the uneasiness of the TCA towards the vertical agreements of the undertakings with high market power is once again confirmed with this milestone decision.

[1] The phrase "Limited" actually refers to the limited number of open selling points, which shall be party to the Agreement, and does not indicate any certain limitation in quantity.

[3] Second biggest player in the production of beer market