Turkey: A Revolution In Un-licensed Power Generation Framework In Turkey

Previously on Mondaq (21.12.2015), we have published our views related to the proposed amendments to the Regulation on Un-licensed Power Generation issued for public opinion on The Energy Market Regulatory Authority (EMRA) website[1]. In that short analysis, we attempted to explain the underlying rationale that EMRA might have followed in introducing those amendments and highlighted the timing of the proposal and how it may hinder Un-licensed Power Generation.

On 23 March 23 the proposal was published into regulation through the Official Gazette. Frankly speaking, with 16 articles and five full pages, the scope of the amendments turned out to be more than anticipated. The amendments include significant provisions to restrict the construction, connection, installment, capacity and transfer of the un-licensed projects. Although grandfathering provisions have been foreseen for several restrictions through provisional articles, the scope and the likely impact of the amendments on the market are still substantial.

It is understood that the fundamental objective of the amendments is threefold:

It is beyond the scope of this analysis to discuss speculation in detail, but suffice to say here that speculation is not inherently immoral; indeed it is instrumental for the effective functioning of any market. It is no bad that less risk-averse market participants take the lead when the market practice is not matured yet, and the future is quite unpredictable; and then attempt to transfer the assets (tangible or intangible) to more risk-averse investors who would only enter the market when it is more predictable and mature. This type of speculation is not really evil; it is indeed efficient.

In the amendments the fundamental restriction to prevent such speculative market activities is the limits put on the share transfers. It is stipulated by the new version of the Regulation that transfer of shares is not allowed from the application to the provisional acceptance, otherwise the call letter would be terminated. Mergers and acquisitions before the provisional acceptance are also outlawed.

The consequence is quite obvious: The projects possessing the "call letters" cannot anymore be subject to exchange among buyers and sellers. The particular feature of this restriction is that there is no grandfathering rule to secure the existing projects. That is, whether or not the project-developer holds a call letter or has already secured the connection agreement, it will not be possible to transfer the shares of the project company to third parties. The wording of the amendment mentions only "shares" therefore it is not obvious whether or not the indirect shares transfer is allowed. There are instances where EMRA staff interpreted the exact wording of "shares" as inclusive of both direct and indirect shares[2]. It might be an option to structure the potential deals if the interpretation would be in favor of the exclusion of the indirect shares transfers from this restriction.

Restrictions on capacity and the requirement of self-consumption

One of the most common application for un-licensed projects, particularly for solar, have so far been the side-by-side installments of the plants each with less than 1 MW capacity but almost 10 MW in some cases as a whole. Such applications have been assumed to have fallen within the boundaries of the un-licensed power regulations so far, however, the amendment attempted to put a limit on such applications. According to the new regulation, rooftop applications put aside, for solar and wind projects, undertakings controlled by each real or legal person; can obtain only 1 MW capacity for each transformer center regardless of the number of the consumption facilities.

The objective of this provision is to prevent the bundling of projects by the same undertaking through installing more than 1 MW plants side-by-side and operating it commercially without getting a license.

Assume that the Solar Energy Holding Company owns 100% of the four companies Solar A-B-C-D and also assume that Solar A has already secured a slot in the Transformer Center to connect a 1 MW solar un-licensed plant. The amendment stipulates that any of the companies depicted in the below illustration shall not be granted further capacity from the same transformer center. Companies controlled by these companies also fall within the scope. 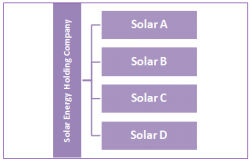 Self-consumption requirement has been another debated issue among the energy circles regarding un-licensed power generation. Any type of small consumption at any level was deemed appropriate to install a 1 MW plant without any license. However, the amendment stipulates that the installed capacity of a wind or solar plant may not exceed thirty times the contracted connection capacity at the consumption point it relates to.

There is still a huge gap between the capacity allowed and the contracted consumption required in the specific field. It may not stop the project developers from installing plants without self-consumption but it may merely usher in the fact that incumbent supply companies become 1/30 partners with each project without injecting any capital if the developers will be allowed to freely decide on the contracted connection capacity admitting to be charged on both energy and capacity basis.

For above-mentioned two restrictions, grandfathering provisions have already been incorporated in the amendment. The restriction does not apply to the projects which have already secured call letters for connection agreements from the network operator prior to the effective date of the amendments of 23 March 2016.

DSOs and the GTŞs are being partly driven out from the un-licensed power generation business. In this regard,

Again, the restriction does not apply to the projects already secured call letters for connection agreements from the network operator prior to the effective date of the amendments of 23 March 2016.

This restriction mostly relates to the competition concerns since DSOs and GTŞs are in a dominant position in their respective regions and potential to abuse their position in the allocation of the connection capacity is the primary threat against competition and the entry of the independents to the un-licensed market. Turkish Competition Authority has also pronounced affirmative opinion regarding this amendment during the public consultation period.

It is obvious, however, that the regulatory landscape for renewable energy is being discussed among the policymakers and most likely will be subject to further revisions. For unlicensed ones it is almost done already; for licensed ones, on the other hand, there are drafts being discussed, and we will wait and see how these drafts will be signed into regulation.